Uniquely among brass instruments, trombones have a slide, used to alter the pitch as it is extended and shortened. Though originally created in the mid-15th century, trombones have continued to evolve through the years.

Here are six things even experienced trombone players may not know about their instrument:

1. The Name Came from Drawing Swords 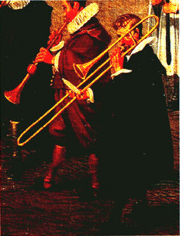 Until the 18th century the trombone was called a “saqueboute” (in French) or a “sackbut” (in English). Although opinions vary on the etymology, some sources (such as The New Grove Dictionary of Musical Instruments) suggest that the word comes from the French word “sacquer,” which means to draw out (a sword or the like). The instrument may have gotten its name due to the act of sliding a tube out to lengthen it resembling that of a swordsman drawing a sword from a scabbard.

The current name of the instrument means “large trumpet.” In German this instrument is called a “posaune,” which originally meant “trumpet.” This is because the trombone and trumpet are like relatives sharing the same ancestor, although trombones have a somewhat wider pitch range than trumpets.

2. The Trombone Was Once a Sacred Instrument

Trombones have been used in a variety of situations, including the courts of aristocrats, churches, and in military bands. However, beginning in the 18th century the instrument was seldom used in secular music. Instead, it was used much more often in religious settings such as in church services. Trombones have a range similar to that of the human voice and are capable of producing awe-inspiring harmonies during concerts, so they began to be treated as “divine instruments.” Composers of the era therefore generally refrained from using trombones in music outside of masses, oratorios, or other religious music.

3. “Fate” Changed the Fate of the Trombone

Trombones are made in a variety of ranges approximating the range of the human voice, including soprano, alto, tenor, and bass trombones: 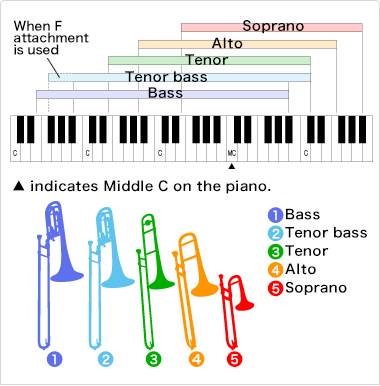 Trombones are generally played by extending and shortening the slide, which changes the length of the tubing and thus the pitch of the sound. Because the slide needs to be extended farther and farther from the body to reach positions far from the body, some unique technology is required to play the instrument smoothly.

The standard trombone is the tenor trombone. It is used in a wide variety of musical genres, including classical, jazz and pop music.

Tenor bass trombones are designed with an extra attachment of tubing called an “F attachment” for an expanded bass range. This also allows the same pitch to be played without the player having to extend his or her arm so far. However, large bore tenor bass trombones require the player to be able to blow a lot of air into the instrument. They are therefore better suited for advanced players. Medium bore instruments are recommended for beginners.

Bass trombones feature an even wider bore size than tenor bass trombones, and are equipped with one or two pieces of tubing to supplement its bass range. Other than the bore size being wider, these instruments are generally identical to tenor bass trombones. However, a bass trombone usually features a second extra attachment of tubing for an even lower range and easier slide technique when playing low. They also use a mouthpiece with a larger diameter to make it easier to produce lower sounds with a good tone quality.

5. Jazz Trombones and Symphony Trombones Are Quite Different

There are two very different ends of the spectrum when considering the types of trombones in common use today: jazz trombones on one end and symphony trombones (for playing in an orchestra) on the other. Some of the parts on these two kinds of instruments vary. Especially noticeable is the size of the bell: 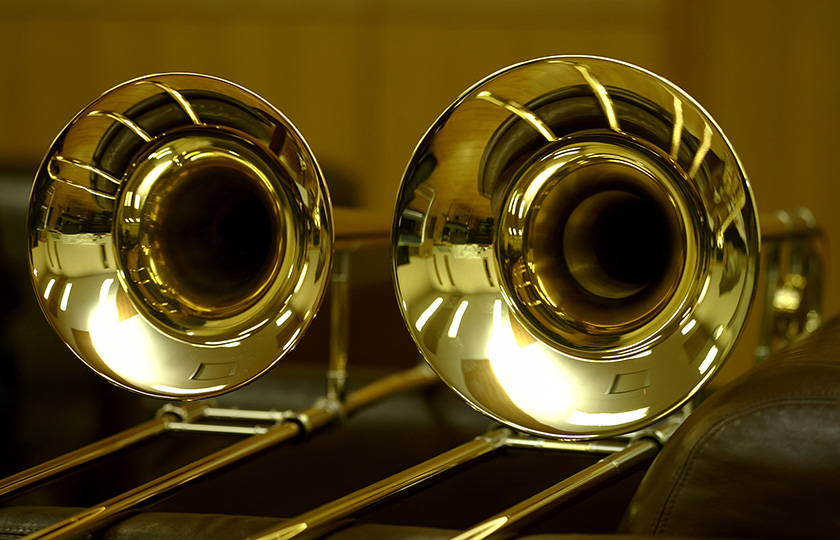 A jazz trombone has a smaller bell, thinner walls, and a smaller bore size. The gap in the slide is also narrower. Jazz models are designed this way to make the instrument smaller and increase slide mobility. This allows the player to move quickly from note to note.

In contrast, symphony models tend to be larger overall (with a larger bell too) and are therefore able to produce a more robust sound. A trombone needs to produce sound that is loud enough to reach members of the audience in the back row — all the way from the rear of an orchestra that may have more than 80 members. A symphony trombone can actually be one of the loudest instruments in the orchestra.

6. It’s Possible to Raise The Pitch Even As You Extend the Slide

In general, the longer the tube, the lower the note. However, trombone players can play higher notes as they extend the slide, simply by adjusting their embouchure to play a note in a higher acoustic partial — a technique that’s helpful when playing anything from a quick jazz solo to a Beethoven symphony.

Don’t believe it can be done? Check out this video: