For every piece of music that somebody loves, somebody else will feel indifferent towards it. You can drive yourself crazy trying to please everyone. But then again, creating art to please others is not the point of art.

When we sit down to create, who are we really trying to please, and why?

The answer to the “who” is: yourself. I’ll get to the “why” shortly.

When we look back, art that will be remembered is art that was created from a deep need to express oneself without the influence of an outside force or opinion.

Listeners can intuitively sense authenticity — something personal yet universal and unique. Those are the songs they keep close to their hearts and eventually sing to their children. 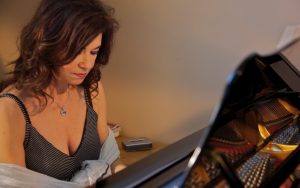 Here I am, getting in the zone.

Admittedly, I’ve written some songs that I’ve tried to convince myself I like because:

2.      I don’t want to disappoint my co-writer, who thinks it’s the best thing since the Smartphone

But if I’m not excited to revisit those songs, tweak them or finish them, then I know that something is up. So I’ve come up with a way to measure whether I’m truly in love with what I’ve created. It’s called The Morning After Test, and it goes like this:

When you wake up the day after you compose a piece of music, is it the first thing you think about, even before coffee or a kiss?

If the answer is yes, you’re golden. It’s that simple.

All those outside opinions from people who mean the world to you can really mess you up. Thing is, if you’re making your own album, it’s going to represent you even after you’re gone from this earth. So write and choose wisely.

No matter what, there’s never any guarantee that your album is going to be a success. If you record only the songs you believe in and the record doesn’t get the critical attention you dreamed about, you’ll still have your soul intact. You’ll still have had that irreplaceable feeling of creating and sharing something real that you’re proud of.

But if you let other peoples’ opinions dictate your path and then the album doesn’t fly, you’ll have, for lack of a better word, failed with a body of work that you didn’t believe in to begin with. Not a good feeling at all. Life’s too short.

Back in 1971, Rick Nelson (the former teen idol known as “Ricky” Nelson) played a concert in Madison Square Garden. He was received well initially, when he played some of his old hits, but when he moved on to some newer material, he was booed — a traumatic experience, but one that inspired him to write the hit song “Garden Party,” which revived his career a year later. Like Rick, I’ve learned my lesson well: You can’t please everyone, so you’ve got to please yourself.

So have fun, experiment, explore, make mistakes — it’s all part of “songwriting cardio.” But when the time comes to choose your babies, get a good night’s sleep and then wake up and see what’s on your mind. Hopefully your favorites will reveal themselves before the coffee. Or the kiss.