If the only music you ever listen to is digital content from your mobile device or computer, sure, you can build a home audio system based purely around Bluetooth®. But if you want to connect your turntable, play over-the-air radio, or even listen to physical digital media like CDs, you’ll want a component stereo (“Hi-Fi”) system, like the kind that was popular with your parent’s generation.

The heart of every audio system is its receiver, and in this two-part series, we’ll look at why it’s such a critical component in any audio setup. In this article we’ll talk about Hi-Fi receivers, and in Part 2 we’ll talk about AV receivers, which add video to the equation.

The best receivers are simple to use yet complex and powerful under the hood. Contemporary models are equipped to handle virtually any type of music source, from analog to digital. They’re definitely not just for your Dad’s generation, as they can be used as the central hub for all the music and audio that you play throughout your house.

Hi-Fi systems give you the ability to mix and match components to put together a system that’s right for your space and your finances. What’s more, if you build around a quality receiver, you can always add or swap other components (such as speakers) as your needs and budget grow.

A receiver functions as the central “brain” of the operation, routing inputs (such as those coming from turntables, CD players, etc.) to outputs (such as speakers and headphones). All of the input sources — except, as we’ll see shortly, those coming from streamed audio such as Wi-Fi and Bluetooth — physically connect to the jacks on the rear panel:

These include a number of line-input stereo pairs for connecting CD players and other types of audio sources that have analog line-level outputs. However, turntables (such as the Yamaha TT-S303), must be plugged into designated “Phono” inputs. These inputs connect to an internal preamplifier that boosts the level of the signal coming from the turntable’s cartridge and processes it with a special EQ curve called RIAA equalization. Many receivers also provide a post next to the phono inputs for connecting a ground wire from the turntable — something that can really help keep hum under control. 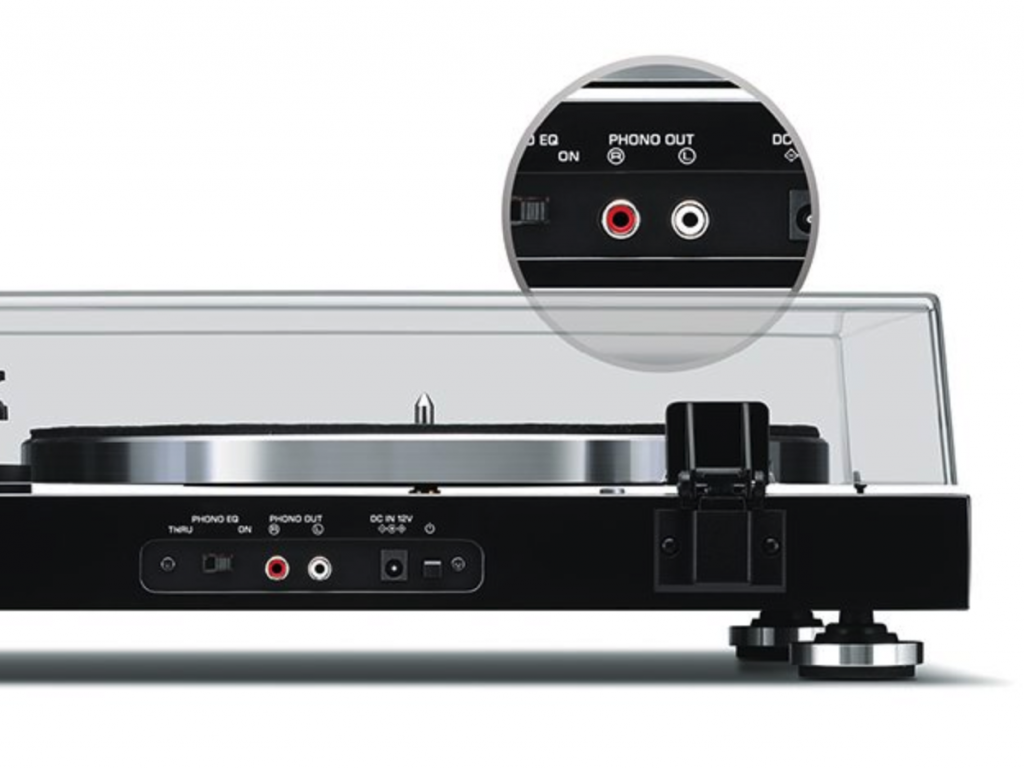 Contemporary receivers such as the Yamaha R-N803, R-N303 and R-N602 supplement their analog inputs with circuitry for receiving digital Bluetooth and Wi-Fi signals. These “Network” receivers even have Ethernet ports for wired connection to a home network, as well as USB inputs for connecting mass storage devices such as hard drives and memory sticks, enabling the playback of MP3 music files and other digital formats via USB.

There are also rear panel output jacks for connection to speakers and other components. In a stereo system, there are two speakers, one for right and one for left. Many receivers, such as the Yamaha R-S202, offer a second set of speaker jacks and facilities for switching between two speaker pairs. In addition, some receivers offer outputs for an optional subwoofer, which supplements the left and right speakers and adds significantly more bass response, and there will always be a headphone jack (typically be located on the front panel for convenience) so you can listen without speakers when desired.

In addition, the Yamaha R-N803, R-N303 and R-N602 support the MusicCast system, which allows you to send music to compatible sound bars and wireless speakers throughout your house.

In addition to a control that allows you to easily switch between various input sources, receivers offer a master volume control as well as separate knobs for bass and treble — sometimes midrange or other frequency bands too — so you can shape your sound using a process called equalization.

There will also usually be a “loudness” on/off switch in recognition of one of the primary characteristics of human hearing: we perceive frequencies differently at different volumes.  At loud levels, we hear more bass and treble and less midrange, while at quieter levels, the bass and treble are much less prominent and the midrange louder. Activating the loudness control boosts the bass and treble, so that you can listen at a soft volume with a similar frequency response to when you listen at loud levels.

Most receivers today (including all Yamaha models) come with remotes so that all these functions can be adjusted from the comfort of your sofa or recliner.

Power to the Music

The function of the amplifier stage of a receiver is to raise the level of incoming signal high enough to drive passive (that is, unpowered) speakers. The specific amount of power, which varies from model to model, is reflected in the receiver’s wattage. Needless to say, the more power, the louder the sound will be.

Less obvious, perhaps, is that more power also makes for a cleaner sound. That’s because the extra wattage gives your system extra headroom — that is, the gap between the highest level of an incoming sound source and the point where distortion begins. This allows you to listen at loud volumes without coming close to straining the amplifier’s capacity.

In a nod to your father’s generation, receivers today still almost always include a radio tuner for both the AM and FM bands. Although listenership to terrestrial radio has dropped in recent years as online music sources have become ubiquitous, the medium is still popular.

There are typically controls for switching between AM and FM and for tuning in radio stations. Many allow you to save stations as presets, so you can switch between them with a touch of a button. Most Yamaha Hi-Fi receivers allow you to save up to 40 different stations for later recall.

Receivers also generally provide special jacks on the rear panel for the connection of an antenna to help boost the incoming radio signal. A small indoor antenna is often provided, but if reception is exceptionally weak, you can always connect a more powerful outdoor one.

The bottom line is this: Hi-Fi isn’t just for your dad. Especially given the recent rise in popularity of vinyl, these kinds of receivers have become more relevant than ever. If you love music but a home theater isn’t in your budget (or immediate future), they’re well worth checking out.

Check out Part 2 of this article: AV Receivers

Area 51: Here’s What “Them Aliens” Might Look Like
Six Reasons Why Watching Football at Home is Better than Going to the Stadium