It produces the lowest pitches of all brass instruments … and there’s a reason why.

One of the seminal events in the history of instrument design was the invention of the valve in the 1820s. Shortly thereafter, valves were incorporated into numerous existing brass instruments (such as the trumpet and horn) and spurred the creation of many new musical devices such as the basstuba, historical precursor to the modern tuba. This instrument made its appearance on September 12, 1835 — the date a patent application was filed by its inventors, German military bandmaster Wilhelm Wieprecht and musical instrument developer Johann Moritz.

The name “tuba” comes from the Latin word for “tube,” but was also used for an ancient bronze instrument used in Greece and Rome. It was later used as a blanket term for horns, trumpets, and bugles. Moritz called his invention the “basstuba” since it had a lower tone than historical “tubas.”

Forerunners of the Modern Tuba

Although their structures were entirely different, instruments such as the ophicleide and serpent had a similar function to the modern tuba in orchestras. Widely used until the mid-19th century, these used keys (metal caps over the tone holes) like woodwind instruments. For example, Mendelssohn’s overture A Midsummer Night’s Dream (1826) calls for an ophicleide. And when Wagner first wrote his Faust Overture in 1840, he did so with the serpent, not the basstuba, in mind.

Three years after inventing the basstuba, Moritz created the tenor tuba, an instrument with a higher tonal range. Fellow inventor Ferdinand Sommer then made the tubes of the tenor tuba thicker and more tapered, calling this instrument the “euphonium.” The name was taken from “euphonos,” which means “beautiful sound” in Greek.

While Sommer was developing the euphonium in Germany, Adolphe Sax, noted father of the saxophone, was creating one saxhorn instrument after another in Paris: first the sopranino, then the soprano, alto, tenor, and baritone saxhorns. All had high tonal ranges that exactly matched the increasingly popular euphonium. (In addition, a bass saxhorn, sold under the name “euphonium,” was also developed and was a great success.)

A modern tuba is typically a C or B♭ tuba. Different varieties of the instrument can have various pitches, but these were not all invented by the same person. Regardless, as a group, we call them tubas.

Even though they have the lowest tonal range of all the brass instrument, there are slight variations of tubas. In addition to different possible structures, the four main pitches are F, E♭, C, and B♭. The baritone, euphonium, alto (tenor) horn and sousaphone are also related to the tuba.

The Baritone and Euphonium

Usually equipped with three piston valves, the baritone (which is a B♭ horn) has the same tonal range as the euphonium. As a result, many euphonium players also play the baritone, and vice versa.

Compared to a euphonium, the timbre of a baritone is brighter and its tubes are considerably thinner. In the U.S., a euphonium with the bell and pistons facing forward may be called a baritone to differentiate it from a true euphonium.

This is an instrument pitched in the key of E♭, five tones lower than a trumpet, sometimes played by trumpeters or horn players.

John Philip Sousa, the famous American conductor and composer of many marching tunes, came up with the idea of redesigning the tuba in a larger size and naming the new instrument after himself. An instrument manufacturer completed it as a special order in 1890.

The sousaphone’s prominent feature is the large bell that sits over the player’s right shoulder and faces forward, which allows the instrument to project its sound toward the front. The large, round bell is often a feature of marching bands and other ensembles that line up and play in formation.

The sousaphone looks truly heavy … and it sometimes is. When constructed out of brass, a sousaphone can weigh more than 27 pounds; however ABS resin material brings the weight down under 10 pounds.

Here’s a chart that shows the frequency ranges of the instruments in the tuba family:

In the first of these audio clips, a tuba is playing from the prelude to Wagner’s The Mastersingers of Nuremberg; in the second one, a sousaphone is setting the rhythm:

In this next audio clip, a euphonium is playing Holst’s Second Suite for Military Band (Op. 28 No. 2):

In this final audio clip, a baritone is playing the British lullaby The Blue Bells of Scotland:

How is the tuba able to produce such low tones?

The tube of a tuba can be as much as 31 1/2 feet in length(!), which is why it can play extremely low pitches.

Can smaller people play the tuba?

You may have heard that the tuba is not suited to smaller people or those with less robust lung capacity. However, this is not necessarily true. Anyone with normal lung capacity is encouraged to give it a try!

That said, there is no denying that having greater lung capacity is an advantage for playing larger tubas and sousaphones. Dedicating some time to daily training can assist with increasing your lung capacity. The ideal approach would be to adopt an exercise habit like swimming or jogging. If this is not feasible, you might want to try deep breathing practice called “abdominal breathing.” If you practice breathing by using your abdominal muscles to fully exhale to the bottom of your abdomen, you will boost your lung capacity while also increasing control of your breath.

Borrow a desk or chair when setting down your tuba!

It’s common sense to rest a tuba on a flat, sturdy surface with the bell facing downward. However, even by doing this, there’s no guarantee that your tuba will be safe from damage to the bell (however slight); in fact, even worse damage can result if you stand it on the wrong surface, if someone bumps into it, or if another accident occurs. In extreme cases, your damaged tuba will no longer be able to play any notes at all. So when placing your tuba on the floor, make sure there’s a desk or chair nearby to ensure that it will not tip over easily. Keep this in mind whether you are in the music room or preparing for a performance!

What’s the largest tuba in the world? 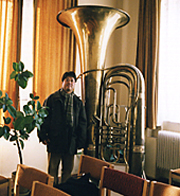 A music school in Kraslice, Czech Republic has a tuba on display that is taller than the height of a person. Apparently made for the World’s Fair held in New York in 1913, it is said to be able to produce notes two octaves lower than an F tuba.