Five Saxophone Facts You May Not Know

Born from the mind of just one inventor, it plays a major role in two different musical genres.

Here are five cool facts that even many sax players don’t know about their instrument.

1. It Has a Unique History

The saxophone is the only instrument in wide use today that was invented by a single individual — a musical instrument designer named Adolphe Sax, hence the name saxophone.

Sax was born in Belgium in 1814. He was a versatile musician who could play many wind instruments and he set out to create one that would not only embody the soloistic and lyrical nature of a woodwind but also be better heard among brass instruments. In 1846, his invention, the saxophone, was patented in Paris.

Fun Fact: Though a creative and enthusiastic person, Sax was not the luckiest child. Numerous accidents during his youth almost ended his life! These include falling from a third story window, being burned from a gunpowder accident, swallowing a pin, nearly drowning, and being poisoned three times.

2. There Once Were Fourteen Different Saxophones

Adolphe Sax thought the saxophone would be capable of fitting in with a variety of ensembles, and so he made them in a range of sizes; from the sopranino in the high range to the contrabass in the low range. (He also invented the saxhorn, a brass instrument with valves similar to today’s flugelhorn and alto horn.)

However, of the fourteen different types Adolphe invented, there are only four types in widespread use today. In pitch order they are, from high to low, the B♭ soprano, E♭ alto, B♭ tenor and E♭ baritone. Each of these saxophones has a range that spans two and a half octaves.

3. It’s the Only Brass Woodwind

From its earliest days, the saxophone was always made of brass. However, because it generates sound with a single reed, it is classified as a woodwind. The only other metallic woodwind is the flute, which was made entirely of wood at first — something that’s sometimes seen even today.

4. It’s All About Bringing Balance

5. It Has a Dynamic Personality

The dynamic range of the saxophone is the widest of all the woodwinds. Because it has a conical bore and not a cylindrical one (in other words, its tube becomes progressively narrower toward one end, as opposed to a clarinet, where the diameter of the tube remains relatively constant), the saxophone can produce a sound that is surprisingly similar to the human voice. This gives it a wide range of emotional expression and makes it ideal as a solo instrument, so it should come as no surprise that the saxophone features prominently in the history of jazz music. Less well known is the fact that the sax often plays an important role in classical music too (particularly in the works of French composers), and is used in a wide range of instrumental groupings, including chamber groups, orchestra, and wind ensembles.

Bonus Question: What’s the Difference Between Jazz and Classical Saxophones?

Though the principles of the instrument are the same, the qualities of a saxophone can be different in jazz as compared to classical music. With jazz, the ideal saxophone allows players tremendous freedom of expression, and so they tend to prefer an instrument with a larger bore (that is, one with a more dramatic taper). The raspy tone and cutting power of a jazz saxophone contributes to the texture of the music and helps the instrument stand out during soloing.

In contrast, classical saxophonists must perform with many other instruments in the orchestra, and so they tend to prefer an instrument with a clean, refined tone and crisp articulation. Generally, classical players prefer a more gradual taper as it gives more precise control over pitch and dynamics.

However, the differences between a “Jazz” and a “Classical” saxophone are subject to opinion. There are numerous examples of jazz saxophonists using a “Classical” instrument and vice versa. The only way to know which works best for you is to try both. 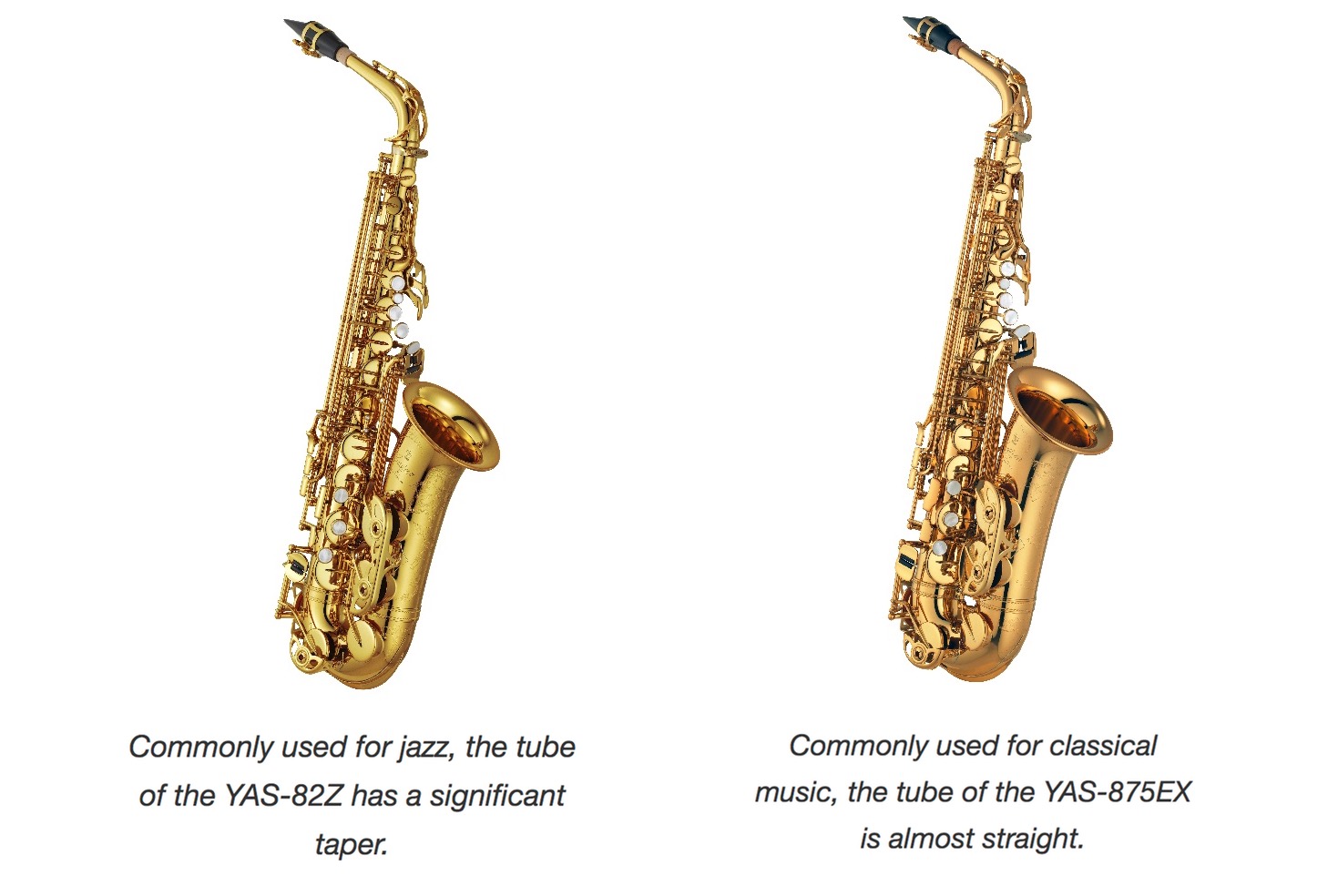 The mouthpieces are even more different. A jazz saxophone mouthpiece is relatively wide, with thin walls and a large chamber that gives the player tonal flexibility. In contrast, a classical saxophone mouthpiece is designed with a more narrow space to provide greater control. However, one mouthpiece can be suitable for multiple genres. For example, some jazz soprano saxophonists prefer a classical mouthpiece for its clean tone. Changing the mouthpiece will have a drastic effect on how the instrument plays. Everything from the tone, sound quality, pitch, and articulation will be different. The cork on the end of a saxophone neck allows a variety of mouthpieces to be attached so that players can change them depending on the sound they wish to achieve.