Sounds of Resilience: An Interview With Dr. Barry Bittman

How musical expression reduces the impact of stress.

“The solutions for our most difficult challenges often lie within us.” So says Barry Bittman, MD, Chairman and CEO of the Yamaha Music and Wellness Institute, a non-profit organization actively engaged in both education and research.

Dr. Bittman is an acknowledged expert in his field — a neurologist, author, international speaker, researcher and innovator who serves as a national healthcare transformation consultant. I recently had the opportunity to speak with him at length about the challenges facing us all during times like these. The information he shared was both illuminating and comforting.

RT: What are the benefits of making music during stressful times?

BB: More than two decades ago, I began what has become a remarkable journey into the relatively uncharted realm of understanding the psychobiological benefits of playing a musical instrument. Over the years, our research teams have uncovered a number of key insights and extensive evidence suggesting that expressing one’s self creatively (even without prior experience) reduces the impact of stress on many levels.

When we are stressed, there are a series of predictable biological changes that occur. If we can reverse the impact of stress by creatively expressing that which weighs upon us, we enable the healing process to begin.

This “disclosure theory” was originated years ago by the psychologist James Pennebaker. What he basically said was that the things we hold inside that we don’t express have a tendency to destroy us. If we can get those things off our chest, then we can positively transform our biology. There is a great deal of research to show that when people express themselves creatively with a musical instrument, there are positive biological benefits.

RT: Does this apply only to professional musicians, or to people who play just for fun too?

BB: We’ve performed a great deal of research on people who frankly don’t consider themselves musical at all. In fact, not being a musician was one of the conditions for the studies.

We discovered that, for individuals who don’t consider themselves musical or who aren’t trying to get to Carnegie Hall, if you give them an opportunity for creative expression musically, their biology changes in a positive manner. It became apparent that what we were really talking about was reversing or mitigating the impact on human stress, regardless of musical proficiency level.

RT: Can you get the same benefits from practicing on your own as you do from performing with others? 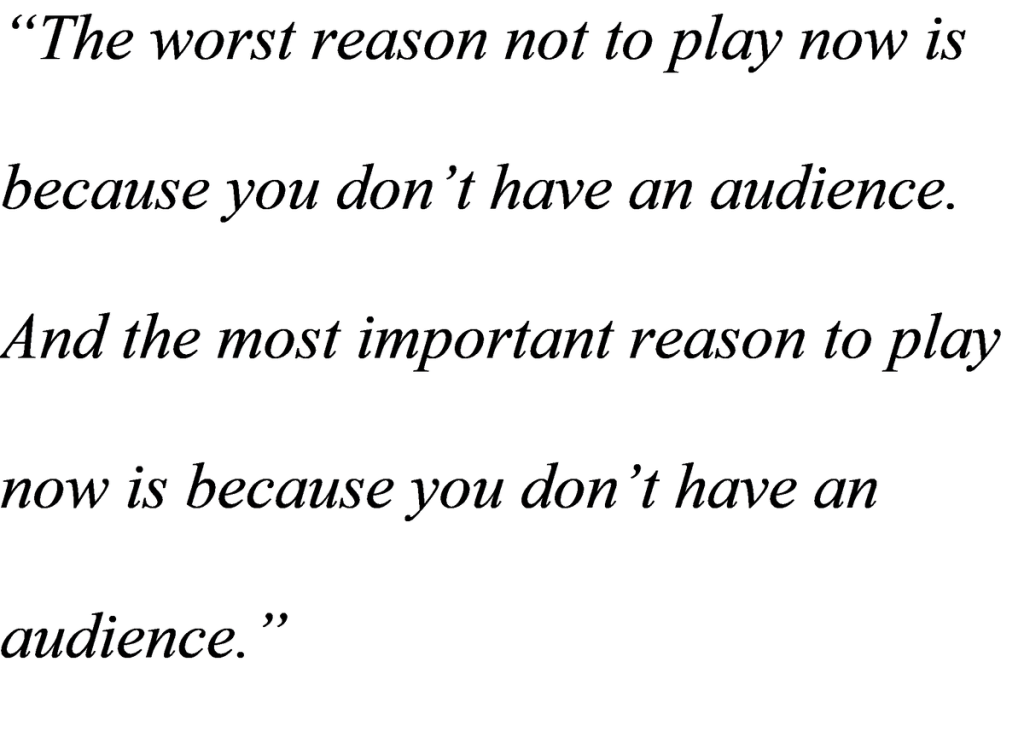 One of my heroes is a gentleman by the name of Ray Bradbury, who was one of the greatest science fiction authors of all time. He didn’t write because he needed to make money or because he needed to publish another book. He wrote because there was no other way for him to internally make sense of everything that was happening in his life. He wrote as a form of creative expression.

As another example, take the classical composer Robert Schumann. He was what we would now call bipolar, previously referred to as manic-depressive. He didn’t compose so that he could buy a new buggy, he did so because he couldn’t survive another day without getting off his chest what he could not express otherwise. The reality is that many of the great composers composed or played for that same reason: it was their survival mechanism.

The problem today is that people, especially in competitive music, strive to play every piece perfectly. They want to play it the way Mozart did, or the way Schumann played it. But it’s absolutely impossible, because it’s inconceivable you could play it that way unless you felt precisely what they were experiencing. I sincerely doubt that even Mozart — who was truly a vessel of music — could play something twice exactly the same way.

What concerns me during times like these is that, when we are stressed and pressured, we tend to first give up the things we love most, because they don’t seem like real necessities. But if we fall back on that which has given us inner peace by allowing ourselves to express our joy, our sorrow, our frustration — if we put those things back into our lives, that’s when healing begins.

RT: How can simply playing an instrument — as opposed to composing a piece of music — be a liberating form of expression?

BB: A person playing a guitar on their couch is expressing whatever they feel. Even if you don’t know how to improvise, even if you’re playing someone else’s music, the way you play it reflects what’s within your soul, what’s in your heart and what needs to be expressed in the moment. In my younger years, I played piano seriously and then I gave it up during medical school. Yet after becoming a doctor, the very first thing I purchased when I could afford it was a piano. I would then come home at the end of a challenging day and bang away, or play gently, to enable myself to get off my chest what I didn’t even realize was inside.

Not surprisingly, I always felt better afterward. Our feelings become our biology. When we talk about blood pressure being raised, for example, it’s a complex reaction to stress — or distress — occurring at multiple levels. When our brains interpret a situation or whatever happens as stressful, a unique biological response occurs. Our experiences become woven into our memory banks — what we call our limbic system — and what follows is the turning on or off of a series switches at the DNA level, which we refer to as gene expression.

What we’ve been able to scientifically accomplish over the years is to measure that gene expression, technically in the form of messenger RNA, and look at the pathways that are associated with inducing and reversing that stress response by playing a musical instrument. Our first study focused on 47 genes that were associated with the stress axis. Later, we were able to look at the entire human genome — every single gene. We were able to measure the reversal of that stress response by actually triggering new stress-mitigating pathways. By pathway, I’m referring to a series of biological reactions in the body that can affect our immunity, and in turn, our health.

RT: What do you see as the best way of coping with the current situation?

Actually, I have a prescription. It’s one that doesn’t require a pharmacy, nor does it have any known side effects. Simply take the time to allow the creativity within you to well up in your own form of musical expression. Whether it be on 88 keys, a drum head, on any instrument of your choice — even just singing in the shower — devote a portion of your day to enabling the sounds of resilience within you to emerge. Just allow your mind to float and generate the music that extends from your instrument in a very personal way. That’s where true healing begins.