What are the components that go into a set of chimes?

It’s always helpful to become familiar with every aspect of any instrument you play, especially if there’s something that needs to be repaired. In this series of “Anatomy” postings, we explore the components of various instruments.

The sound of chimes (sometimes known as “tubular bells”) resembles that of church bells, carillon or a bell tower. Sound is produced when the metal tubes in a set of chimes are struck along their top edge using a rawhide- or plastic-headed hammer called a chime mallet. An attached damper pedal allows an extended ringing of the bells.

Here’s an annotated illustration of a typical set of chimes, followed by a description of the main components, in alphabetical order: 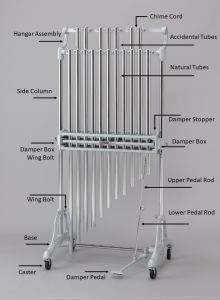 Base. The bottom support for the instrument.

Caster. Casters allow the chimes to roll freely, making transport and setup easy. They are usually equipped with locks, which should be engaged whenever the chimes are in use.

Chime Cord. Each tube is hung using a separate cord, allowing it to resonate freely. Chime cords are made of string covered in plastic.

Damper Box. This stops the tubes from ringing. Additionally, it keeps the chime tubes from moving freely during transport.

Damper Box Wing Bolt. This connects the upper pedal rod to the lower pedal rod. Unlock and remove this wing bolt to remove the damper box during disassembly.

Damper Stopper. When pushed in, this allows the chime tubes to ring freely without the use of the damper pedal.

Hangar Assembly. This holds all the chime tubes in place with the use of the chime cords.

Natural / Accidental Tubes. The standard range of chimes is C4 – F5, including both natural and accidental notes; the longer the length of each metal tube, the lower its pitch. In addition, the tubes in a set of chimes can vary from 1 1/4″ to 1 1/2″ in diameter.

Side Columns. Two long posts on either side of the instrument that support the entire frame assembly.

Wing Bolts. Used to attach the side columns to the base.

Explore our other “Anatomy of a …” postings.