A refined design leads to improved sound, playability and handling.

At Yamaha, innovation is about helping people make and enjoy music. In this series, we’ll explore some of the innovative concepts in Yamaha concert percussion instruments.

The instrument known as chimes (sometimes referred to as tubular chimes or orchestral bells) is not that old, having first appeared in England around 1886. Orchestras needed something to replicate the sound of church bells. It was determined that hanging a variety of tuned metal tubes not only offered greater rhythmic precision than a flat set of box bells, but also provided a clearer tone with fewer high harmonics.

As the popularity of the instrument grew, with it often being used in 20th century American music and film scores, demand also increased, especially with school band and orchestra programs. However, over time, these instruments became quite large and unwieldy, making them difficult to transport. It was also a challenge to keep them in tune and difficult for students to play with confidence since more schools were taking chimes out onto the field for marching band performances. Enter the Yamaha redesign featured in the company’s YCH model chimes.

To command a presence onstage, an instrument not only has to sound good, it should be visually appealing. While a grand piano takes up horizontal space, chimes take up a lot of vertical space. Chimes will be seen from the far reaches of any musical venue, and once played, will immediately call attention to the percussionist. YCH model chimes follow the design aesthetic of a Yamaha grand piano. An instrument that looks great will not only inspire the musician but will reward the audience with the enjoyment of watching the player.

Yamaha YCH model chimes have longer sustain than previous models. By using acoustical analysis, the design team found that the second and fourth harmonics in previous models were decaying at a faster rate than other harmonics, as shown below. A means was found to lengthen this decay. This was accomplished by changing the shape of the head cap, changing the application of the plating on the tubes and ensuring the raw material was more consistent in shape and thickness. These alterations worked together to enhance the volume and provide more pitch clarity. They also helped to ensure that any slight cyclic variation or “warble” in the individual harmonics of previous models was eliminated. 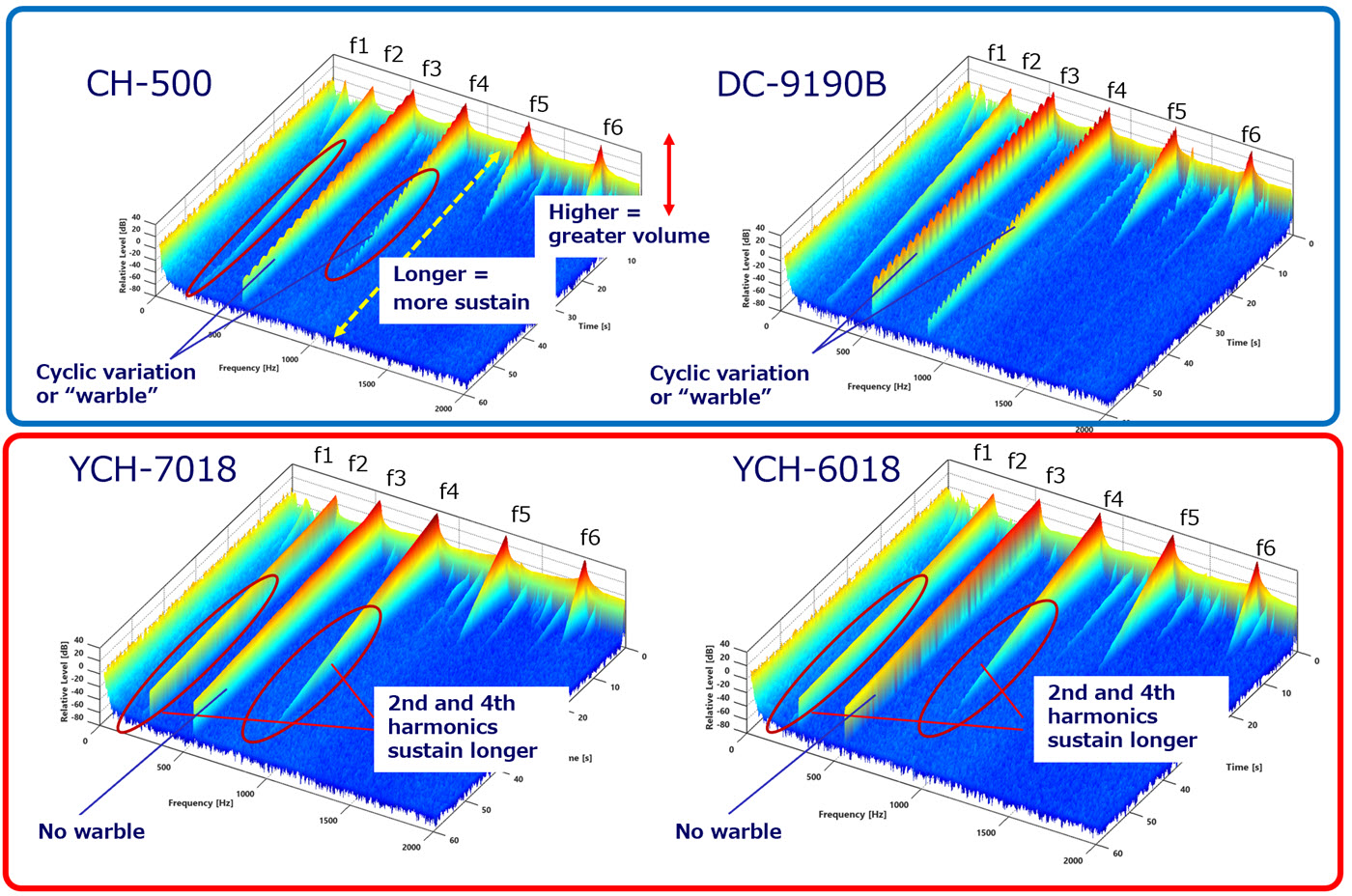 Several new ideas were brought to the table to make chimes easier to play:

– A redesigned head cap. This provides a wider sweet spot, so it is easier to for a younger player to produce optimum tone (see the illustration below). In addition, the redesigned head caps are silver-colored, contrasting nicely with the gold-colored tubes for an easier visual reference.

– Improvements to casters. It’s important for chimes to be both stable and level during use. A swivel prevention caster was therefore added to prevent any side-to-side movement of the frame. The Yamaha YCH-7018 casters also offer height adjustment. This is important because, if the chime tubes are not properly centered in the damper box due to an uneven playing surface, the tubes can touch the damper felt, thereby reducing sustain and deadening the tone. Adjustable-height casters make it easy to level the instrument so the chime tubes hang away from the damper felt. 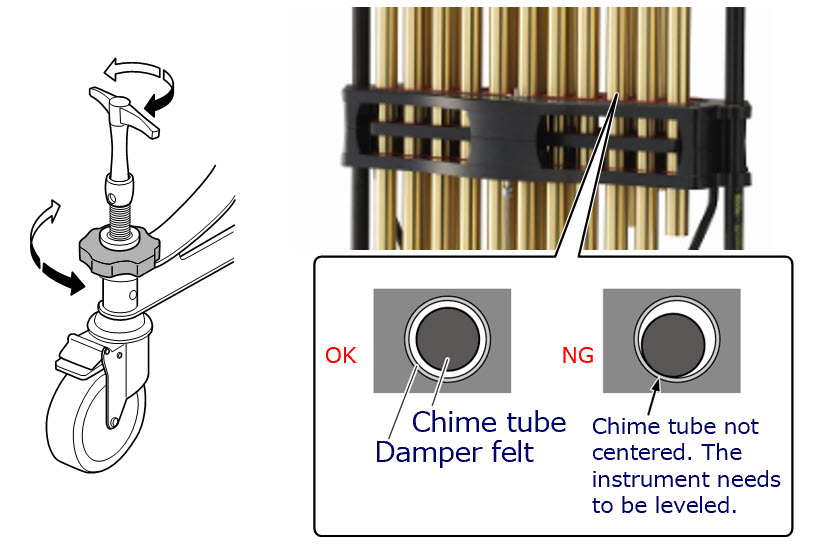 – Improved damper function. In previous Yamaha model chimes, the damper box moves side-to-side. The revised damper box moves front-to-back instead — the opposite direction from how the tubes move when struck. By aligning damper movement with the front-to-back motion, the damping response is notably improved. This makes it easier for the percussionist to stop the extended sustain of the redesigned chime tubes at the most musically appropriate time.

– Redesigned hanger. The distance between the natural and accidental (sharp/flat) chime tubes has been reduced to make playing fast passages easier, especially for younger players. This allows players to strike each chime cap with greater accuracy and confidence.

– Lower playing position. The overall height of the instrument has been reduced, thereby lowering the playing position for players of smaller stature. Additionally, the accidental chime tubes on the YCH-6018 are 13 centimeters lower than previous Yamaha models. This allows younger players to reach them with greater ease. 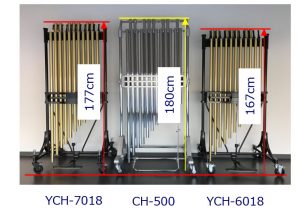 As every band director knows, the process of hanging chime tubes requires time and care. Most chimes attach tubes using a plastic-covered wire, which can make it difficult to adjust the wire length, so the tubes are perfectly horizontal. If they are not aligned correctly, less-experienced players have a greater chance of striking an incorrect note.

Yamaha YCH models feature a system with wires that have ball ends that simply hook into slots on the hanger, making it much quicker and easier to hang the tubes. With these chimes, it’s easy to achieve a perfectly horizontal tube alignment for optimum playability:

– Damper rod clamp. The damper rod clamp system has been redesigned for greater clamping strength and a more secure hold that prevents slippage when the damper pedal is pressed.

– Floor noise reduction. The hanger unit is now connected to the side frames via vibration-damping rubber, which reduces the effects of floor noise while performing.

– A flexible tube arrangement. A full complement of damper holes is provided in the sharp/flat chime tube row, allowing any arrangement of chime tubes to be used. All available spaces can be used for a total of 21 tubes if desired. Since the position of the low C tube is not predetermined, complete freedom in terms of layout is provided, even when special-order chime tubes are used.

Want to learn more? Check out the video:

Seven Things About Chimes You May Not Know

What’s the Difference Between Vibraphone, Glockenspiel and Chimes?