We all have our musical heroes. If you’re like me, you probably think of one or more of them as “geniuses.”

But are they really worthy of the term?

In last month’s Editor’s Corner I talked about the art of arranging, citing the genius of Brian Wilson as an example. It’s an appellation often given to the famed leader of the Beach Boys, and in his case I think it’s justified, but as I was writing the piece it got me thinking about what the word actually means. 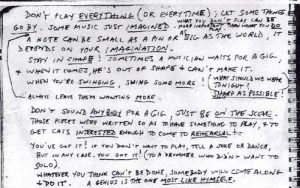 The Oxford Dictionary tells us that it signifies “exceptional intellectual or creative power or other natural ability.” But I feel that a far better definition was provided by Thelonious Monk. The legendary jazz pianist was almost as well known for his dispensations of wisdom as he was for his distinctive composing and playing skills. As scribbled down by one of his sidemen (soprano sax player Steve Lacy) in a spiral-bound notebook way back in 1960, Monk’s primer of do’s and don’ts have become a kind of bible for musicians everywhere.

There’s lots of timeless advice here (“What you don’t play can be more important than what you do play”; “A note can be small as a pin or as big as the world, it depends on your imagination”), but the observation that’s made the most impact on me is this one:

“Whatever you think can’t be done, somebody will come along and do it. A genius is the one most like himself.”

There have been many inspiring examples of people coming along and doing the “impossible” throughout history. From the light bulb to recorded sound (incredibly, both inventions from the mind of one man — Thomas Edison), from the automobile to the airplane, from the telephone to the smartphone, from the computer to the internet, these are all parts of our everyday life that would have seemed unthinkable not all that long ago.

But more importantly, I think, is the second part of Monk’s assertion. What he’s saying (much more poetically than I ever could) is that a genius has to be an individual and have the courage of their convictions … no matter what.

Brian Wilson faced ridicule in the early stages of his career. His soaring falsetto was viewed by many at the time as “sissy” music, and many of his initial songs — driven by record company pressure to cash in on fads such as surfing and hotrods — were characterized by puerile lyrics and simplistic melody lines. But even as a teenager, Brian knew that the music deep inside him had worth, and he kept at it. Eventually he matured into one of the twentieth century’s most inventive and influential songwriters, giving the world masterpieces like “God Only Knows” and “Good Vibrations.” 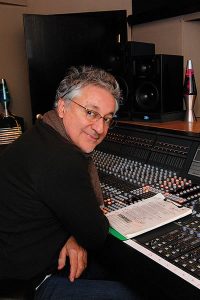 It’s fine to be influenced by your heroes, at least early in your musical career. But the ultimate path to genius lies in being yourself. Some years ago, I had the opportunity to interview veteran engineer Humberto Gatica (who’s worked with a star-studded list of artists that includes Celine Dion, Barbra Streisand and Josh Groban), and the advice he offered to aspiring young record producers and musicians came down to just that. Here’s what he had to say:

“Be open to trying things, and you will find your sound. At the end of the day, it’s what you think sounds good and what feels good to you. It might be in line with other people who will want to work with you because they love the way you hear things. Or it might work against you because they don’t like what you do.” In other words, irregardless of opinion, you need to follow your own path.

So be unafraid. Do the undoable. Be yourself. Have the courage of your convictions and the strength to stand by them even in the face of adversity. Achieve these goals and someday you just might find yourself on someone’s list of musical heroes (not just your mom’s! LOL) … and they might even think of you as a genius.

The Pianica: A Great Way To Start a Musical Journey
Launching Into Uncharted Territory