You might think that there isn’t much difference between hearing and listening, but that’s not the case. Although both involve the auditory system, they’re mostly different processes. Just ask legendary recording engineer, producer, inventor and educator George Massenburg.

“Hearing is the act of perceiving sound by the ear,” he wrote in a 2019 paper entitled “Critical Listening and Critical Evaluation.” “Listening is a conscious mental process, as much about the brain as the ear.”

In this article, we’ll take a closer look at the meaning of critical listening and describe some steps you can take to develop that invaluable skill.

Other than covering our ears or moving to a different location, we don’t have control over what we hear. If a sound is within the range of our auditory system, we will hear it. Listening, on the other hand, is something we do for a reason.

The reason can be quite simple — for example, listening for a whistle to blow to know if a train is coming. Or it can be a lot more complex, such as wanting to concentrate on what a lecturer is saying in order to better understand the subject being explained.

When it comes to music, listening can be a visceral and straightforward process, or it can be far more complex, depending on the situation. If you’re dancing at a club, you’re probably not consciously analyzing specific aspects of the music; you’re just reacting to the beat and the groove.

But if you’re sitting down to savor a favorite album or song being played on a high-quality audio system, the ability to listen critically — to perceive and analyze the musical and sonic constituents — can make for a more rewarding experience. It gives you a more comprehensive and informed basis for understanding the music you love, from both an artistic and technical standpoint.

“For evaluating music, there are at least two basic ways to listen,” says Massenburg. “[As] an engineer and as a producer.” Although he’s referring to the listening skills required by audio professionals, the same basic concept and the same degree of focus applies if you’re a music lover listening for pure enjoyment … and while you’re at it, you should also learn to listen like an arranger.

The “producer” side Massenburg cites requires knowledge of the genre in order to evaluate the artistic aspects of the songwriting (both music and lyrics), as well as the arrangement and the quality of the performance. Music lovers, like producers, need to become an aficionado of the style(s) they want to listen to critically. In addition to consuming a wide range of music by artists in the genre, it’s helpful to read interviews, listen to podcasts and watch videos.

Once you’ve immersed yourself like that, you’ll be better able to evaluate the artistic aspects of a song or album from a contemporary standpoint, as well as helping you understand its roots and historical context.

A big part of listening critically is being able to pick out the sound of individual instruments so you can understand what they are doing and the role they’re playing in the overall arrangement. Some people are born with this ability, but if you’re not one of those lucky individuals, there’s ample evidence that it’s a skill that can be developed over time: It’s simply a matter of playing a song repeatedly as you concentrate on one instrument at a time.

The more you do this, the better you’ll get at it, and you’ll find that you get a better sense of how the instruments all interlock with each other to create an ensemble sound. You’ll also start noticing similarities in the instrument parts between different songs of similar types. Those similarities are what help define a genre.

For example, in reggae music, the rhythm guitar parts almost always consist of short, staccato chords played on the upbeats. In EDM (Electronic Dance Music), the bass drum is almost always playing a “four-on-the-floor” pattern. That means it’s hitting on every quarter note (1, 2, 3, 4), creating a pulse in the low frequencies.

The “engineer” side of critical listening entails being able to analyze a recording from a technical standpoint. This includes negative aspects like an awareness of distortion or processing artifacts such as over-compression or poor application of EQ, as well as positive aspects such as a good balance of tonalities or powerful dynamics. The good news is that you don’t need musical or studio experience to be able to do this: over time, you can learn to evaluate the technical aspects of what you’re listening to.

A good place to start is by studying panning — the way that the mix engineer or producer places the instruments in the stereo spectrum to create a virtual soundstage. This is one of the main tools used by professional mixing engineers to help give each element its own space — something that’s critical to keep a recording from sounding cluttered or muddy.

In pop music, the bass drum, snare drum, bass (whether upright or electric) and lead vocal are usually panned in the center, while the rest of the drum set, as well as most other instruments, are usually spread out to various points to the left and right. The illustration below shows a typical software mixing console a recording engineer might use, showing pan settings (L/C/R, short for “Left” / “Center” / “Right”) at the top for each instrument or vocal part. 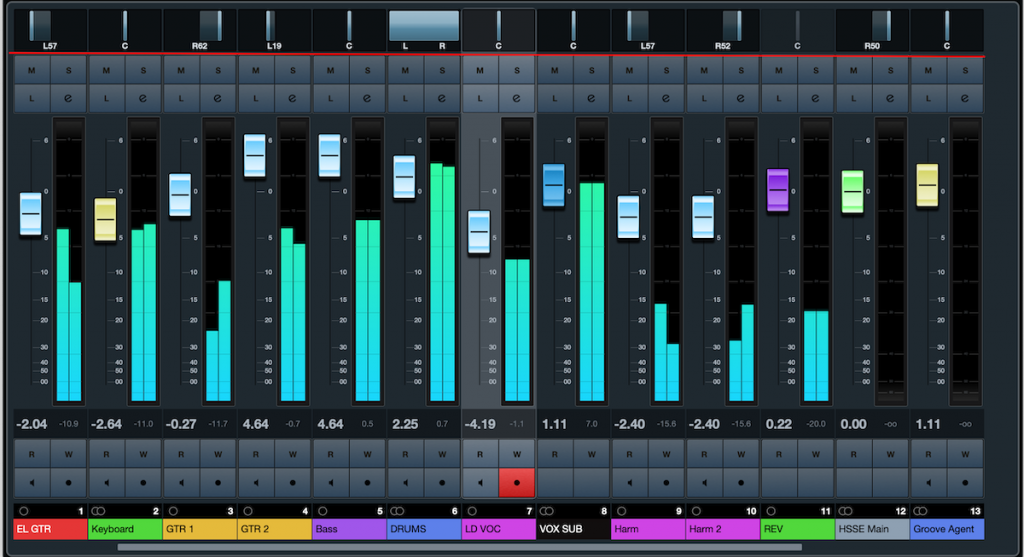 Mixing engineers can also make specific instruments or vocals seem like they’re further forward or further back. One way to bring an element forward is to make it louder. Another is to make it “drier” by putting less reverb on it.

Listen to a favorite song with the placement of the parts in mind. Which elements feel more forward? Where are the background vocals panned? Are the rhythm guitars fully left and right? The keyboards? Apply these kinds of criteria as you listen repeatedly, and you’ll soon begin to appreciate the styles and skills of various mixing engineers and producers.

The Highs and Lows

Another important aspect of critical listening is being able to discern the different frequencies (pitch ranges) in a recording. The illustration below shows a software frequency analyzer — a tool used to display the relative strengths of the different frequency areas, from the lows (bass, bass drum) to the mids (vocals, guitars, keyboards) to the highs (cymbals, shakers, breathiness).

This is a great tool for understanding frequency areas, but the goal here is to use your ears, not your eyes, to discern these regions. Try listening to a favorite piece of music without the benefit of this kind of aid, and ask yourself the following questions: Does the overall recording have a lot of clarity (i.e., is it easy to pick out individual instruments) or is it muddy (i.e., hard to discern individual components)? Does it sound overly sizzly, boxy, or boomy? (This would indicate a poor tonal balance, and a surplus of high, midrange or low frequencies, respectively.)

Not Just for Effect

Another facet to listen for is effects. Is there a lot of reverb on the vocals? Is there delay (echo)? It’s important to be able to differentiate between the two. (Reverb is a kind of diffuse “cloud” that follows a signal, while delays/echoes are distinguishable as being separate from the source.) Maybe there’s some subtle distortion? Does the voice sound natural or heavily processed? Is the overall recording dynamic (i.e., can you easily differentiate between the loudest sections and the softest ones) or is it static (i.e., everything sounds like it’s pretty much at the same volume)? Dynamic recordings tend to be much more interesting to the human ear than static ones, which often result from the over-application of compression and/or limiting.

One of the hallmarks of well-crafted music is that it changes — sometimes quite dramatically — from start to finish. When you’re analyzing the arrangement and performance on a recording, one of the fascinating things to listen for is how it changes over time.

For example, in both classical and pop music, you’ll notice that the arrangement usually builds subtly from section to section. Instruments will get added, or the intensity will vary, and the composition or song will typically reach its peak (both in level and complexity) at or near its conclusion. Well-arranged songs also have variations not only in instrumentation but dynamics, with the volume level constantly shifting to hold the listener’s interest.

Being a critical listener allows you to delve beyond the gut-level reaction you have when you first hear a song. (Not that there’s anything wrong with that; in fact, music is typically written to elicit an immediate response from the listener.)

But with the ability to listen critically, you can appreciate music intellectually as well. You’ll start to see how all the various aspects — writing, performance, arrangement, production and the technical aspects of the recording — come together as a whole to put a smile on your face. There’s a reason, after all, why your favorite music is your favorite music … and now you’ll be able to know what that reason is!

What is an Integrated Amplifier?

Here’s What You Need to Know About Vinyl