For many people, hearing every nuance of sound in a recording can be almost more important than the songs themselves. Some may think that an analog Hi-Fi system is the only way to enjoy this level of detail. But with the rise in popularity of digital audio and continuous ongoing innovation, analog may have met its match. There are already some wireless speakers that can stream Hi-Fi audio from any mobile device without a significant drop-off in sound quality.

If you’re ready to make that transition, here’s how to get started:

Before you begin, be sure you understand the differences between the types of audio files you can stream. “Hi-Fi” stands for High Fidelity, a term used to describe high quality sound reproduction, including both analog audio and high-resolution digital audio.

Digital audio compared to analog audio is kind of like watching a film on DVD versus watching it on a 4K Blu-ray Disc™. As shown in the illustration below, analog audio is usually represented as a wave. You can think of its digital equivalent as boxes that fill in the space with small gaps in-between: 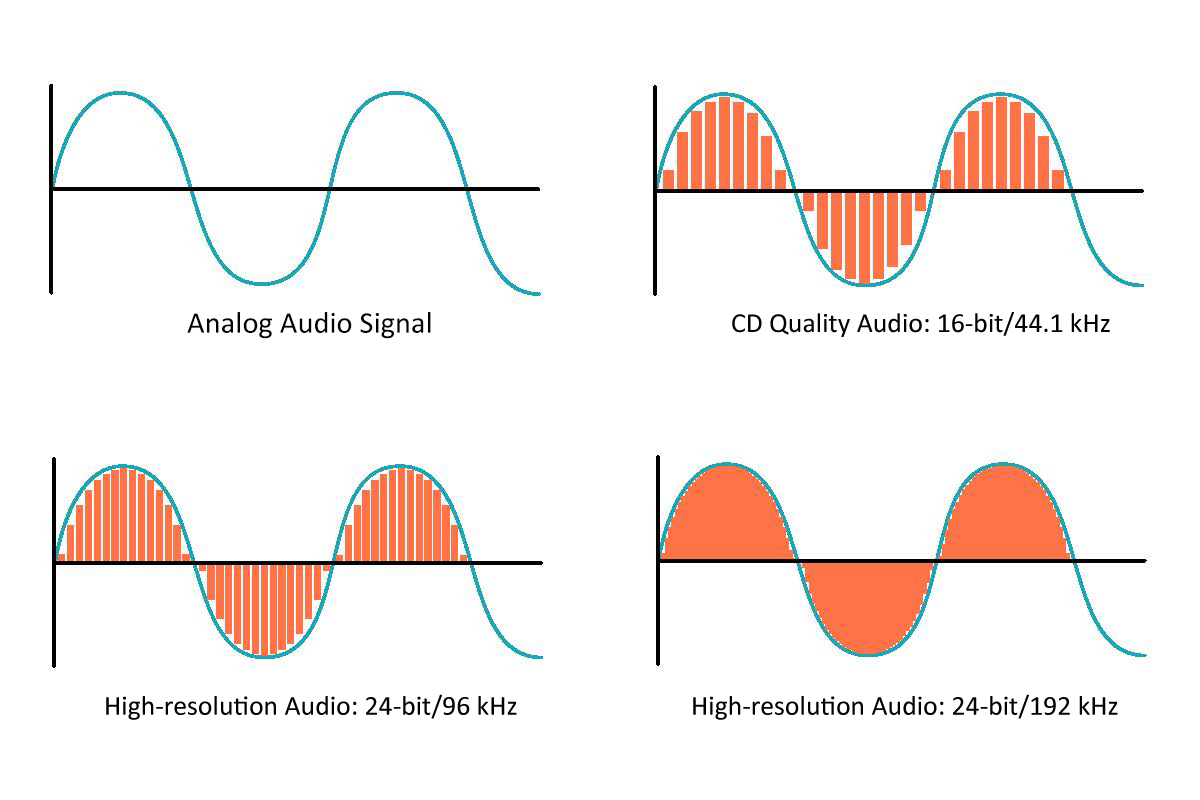 There are two important terms to understand here. The first is something called the sampling rate (sometimes called “sample rate”). This describes the number of times per second the incoming analog signal is analyzed. The higher this rate, the more accurately a sound is recreated — in other words, the better the audio. The downside is that higher sampling rates result in more numbers, so the files created are larger … and therefore require more bandwidth to be streamed. (The term bitrate describes the “throughput” of a streamed digital signal in terms of kilobytes per second [kbps].)

The second term is bit resolution. This describes how large each digital word is. The more “bits” (that is, the greater the number of ones and zeroes) used, the more increments are available to represent the position of each sample of an analog wave. A 24-bit digital word, for example, will yield better audio than a 16-bit word. However, there’s a downside here too, in that the use of longer bit resolutions again require larger file sizes and therefore greater streaming bandwidth.

As an example, CDs store data as 16-bit words, with a sampling rate of 44,100 times per second (44.1 kHz). MP3s can use various bit resolutions and sampling rates but the most common is 24-bit / 44.1 kHz. This is what many streaming services provide, and therefore what many wireless speakers support when streaming.

High-resolution audio is typically produced at 24 bits but with higher sample rates of 96 or even 192 kHz. The file type also needs to be in a lossless format to be considered high-res. These types of formats include FLAC (Free Lossless Audio Codec), WAV, AIFF, DSD, and ALAC (Apple Lossless Audio Codec). “Lossless” simply means that the decoded file contains all of the audio information. Obviously this is optimum but, again, the downside is that this makes for much larger files than “lossy” formats such as MP3, which are designed to remove unnecessary audio in order to compress the file to an easily downloadable size.

There are currently several streaming services that support CD quality (16-bit / 44.1 kHz) files. Yamaha wireless speakers work with two: Deezer and TIDAL. They also work with Napster, which can stream MP3 files with up to 320 kbps bitrates, although these files are significantly less than CD quality.

To stream high-res audio, you’ll need to use a Wi-Fi™ connection instead of Bluetooth® to maximize output. Dropouts with Bluetooth are common because the device you’re streaming from is typically required to be within 32 feet. There are also limited hi-res streaming options on the market for Bluetooth. Wi-Fi offers more stability and distance, in addition to the ability to stream to multiple devices at the same time.

Coming to the U.S. this spring is French company Qobuz, one of the few commercial streaming services that currently supports high-resolution audio (though TIDAL has a hi-res streaming option too). However, you can also stream high-res files that have been downloaded to a local storage drive, such as a thumb drive or NAS (Network Attached Storage) drive. Due to the large size of high-res files, we recommend you use a 2 TB NAS drive if you have a large library of files.

However — and this is important — not all speakers are designed to support the streaming of high-res audio. The good news is that MusicCast-enabled devices from Yamaha (which also provide multi-room audio solutions) make it a breeze. The Yamaha MusicCast Controller app offers a user-friendly option for streaming high-res audio to any MusicCast wireless speaker, such as the MusicCast 20. All MusicCast devices support Apple Lossless (ALAC) up to 24-bit / 96 kHz as well as WAV, FLAC, and AIFF up to 24-bit / 192 kHz. MusicCast AV receivers, Hi-Fi components and powered monitor speakers also support DSD up to 11.2 MHz.

Start by launching MusicCast Controller on your mobile device, then follow the steps to add a MusicCast device to the network if you haven’t done so already. Next, select the device you want to stream to. 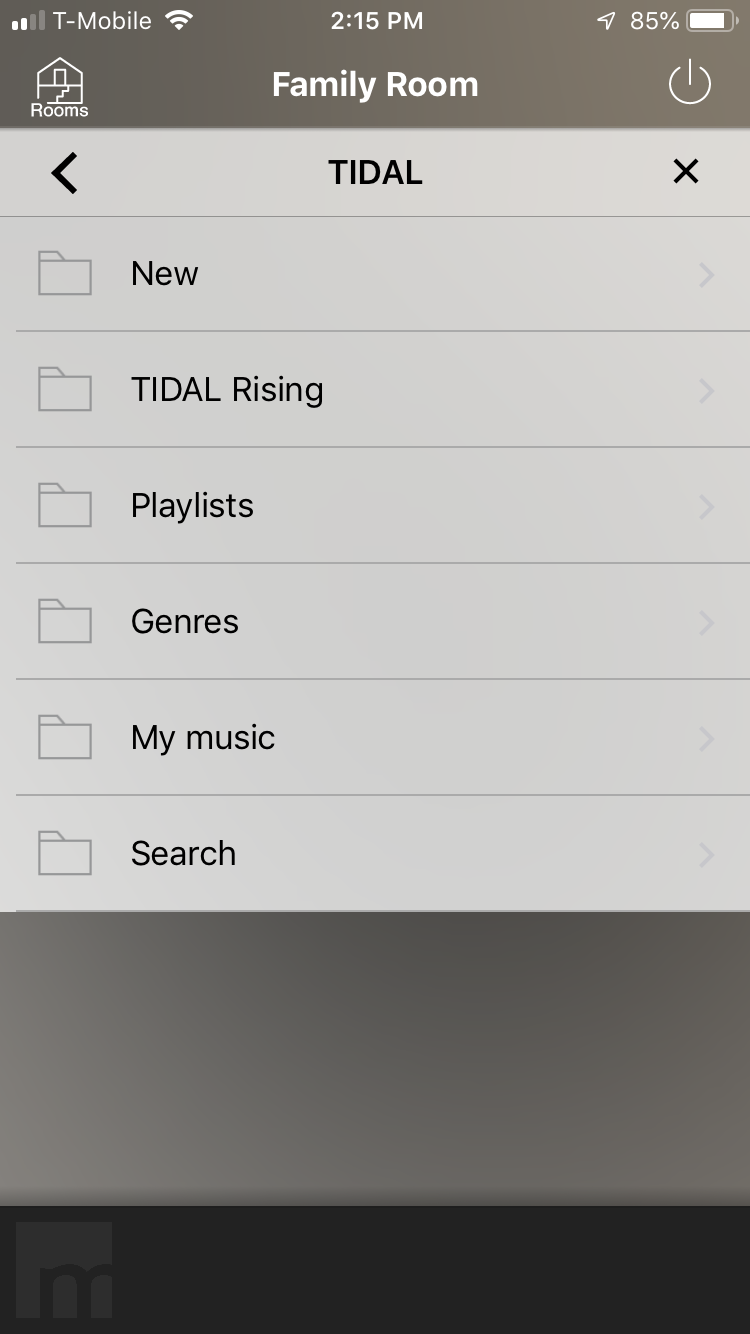 In the menu that appears, select the streaming service you want to use and you will be shown the different options available with that service, which may include things like New, Playlists, and Genres; there will also usually be a Search option. These will all be available within the app to make it easier to navigate, but there’s one catch: High-res audio only works when you stream to one device at a time. Once you add a second or third device, the resolution automatically drops from 24-bit / 96 kHz to CD-quality 16-bit / 44.1 kHz. If more than three additional devices are linked at once, audio is provided in a compressed format.

That’s all there is to it! Now you’re ready to stream music digitally while still enjoying all the clarity and quality you’d get from a quality analog Hi-Fi system.

If you’d prefer to keep your traditional Hi-Fi setup but want the added benefit of streaming capability, check out the MusicCast VINYL 500 Wi-Fi turntable.