Creative Ways to Practice with a Metronome

Developing a good sense of time and rhythm is an essential skill for every musician. Beginners are often guided to practice with a metronome, and it can be an invaluable aid, but I think musicians at all levels can make good use of a metronome. In this article, I’ll share some concepts on how to use one effectively — perhaps in ways you’ve never thought of.

One of the most common purposes for a metronome is to provide the intended tempo for a piece of music. Often, sheet music has a marking like this:

This indicates that each quarter note should occur at a rate of 100 beats per minute (BPM). If you don’t have the sheet music for a song you want to practice, but want to know its intended tempo, just head over to the internet and type the song’s name, followed by BPM. A slew of sites will pop up giving you the answer. Bear in mind that this only tells you the speed the piece should eventually be played at, because you should never start to learn a piece at the final intended tempo. First you need to learn the notes, work out fingerings, and rhythms — all things that initially should be done very slowly. Always be sure you get everything right at a much slower tempo before trying to speed it up.

Beginning students are often instructed to set the metronome to a medium slow tempo and then play a simple piece with all quarter notes. While this is a good way to start, it’s actually letting the metronome do too much of the work, plus that incessant clicking can get very annoying, so let’s look at some more creative options.

(Side note: Learning to play a scale or melody at an extremely slow tempo — say, 20 BPM — can be a great exercise in and of itself; as advanced players know all too well, super-slow tempos can sometimes be the hardest to play.)

In a previous posting in this series, we talked about practicing scales/modes against a metronome, and about varying the octaves and rhythms as two octaves of eighth notes, three octaves of triplets, and four octaves as sixteenth notes. To experience this, let’s begin by taking one of the exercises from that posting, shown below: 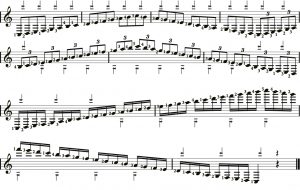 The smaller cross-haired notes represent the metronome “clicks,” based on having it play quarter notes. After playing this a few times with your metronome set to 100 BPM, take the tempo down to 50 BPM and think of the clicks as representing half notes instead of quarter notes:

This will result in you playing the exercise at the same speed, but now you need to sub-divide each click into more units, and so you won’t be able to rely on the clicks as much. You can do this for any piece you are learning; just cut the BPM in half, and think of each note as twice the unit represented on your sheet music.

After you learn the piece and are comfortable playing it with the metronome, try halving the tempo from 100 BPM to 50 BPM and let those clicks be the one and the three of your counting, as shown below:

The tempo will be the same, but now you have to rely on your internal clock a little bit more, instead of letting the metronome do all the work for you.

Next, try thinking of those same clicks as the two and four of your tempo, like this:

This is the best way to use a metronome when playing jazz, for example, as it matches what a jazz drummer would do with the hi-hat, and it really gives the music a lift. You can practice playing melodies this way, or playing through the chord progression, or even soloing. Just be careful: It’s easy to turn the beat around so the clicks become the one and the three instead … at which point the jazz police will come and put you straight into jazz jail!

Take It Up a Notch

When you get comfortable with these “two beats to the bar” examples, you can go for an even harder exercise, like this one:

You need to cut your metronome tempo in half again, and now each click represents only one beat out of the four per bar. I like having it on beat three, but any beat is fair game! You get used to it by saying “three” with each click, and then fill in the rest of the counting as you can. Remember, this is the same tempo we’ve been using since the start of these chordal figure examples; we’re just playing around with how many clicks we hear per bar and where they’re placed.

Trust Your Timing Even More

All of these ideas can be done with any sort of basic metronome, but I found another great exercise while researching new ideas for myself. My search led me to this video, and the related blog site of guitarist Sean Driscoll. The concept I was drawn to is to leave entire bars of silence in-between some metronome counting, so you get to “fly solo” for periods of time without the metronome’s help. To do this, you’ll either need a highly programmable metronome app for your phone/device such as Time Guru Metronome, or you’ll have to custom-create click tracks or patterns with the appropriate periods of silence in your DAW or drum machine. Sean’s idea, which he calls “one, one and done,” involves having a single click on the one in bar one, another single click for the one in bar two, and then two bars of silence, like this:

Leaving all those empty beats gives you the chance to carry the time by yourself for longer periods, and it is instructive to see what happens when the patterns repeats and that first click comes back. Did your time drift?

Another fun variation is to try this with the metronome clicks on the two and the four, then leave the metronome out for two bars. This is similar to what we did earlier (albeit without the empty spaces):

Using your metronome in creative ways like these will help enhance your sense of timing and groove … and without boring you to tears. Have fun with it!