An army of volunteers and community partnerships transform Bass Performance Hall, an opulent opera house, into a tuition-free classroom for a summer percussion camp.

You can feel the enthusiasm and hear the reverberating sound of music and movement. Every summer, 75 high school students in Fort Worth, Texas, hone their percussion skills.

The Nancy Lee and Perry R. Bass Performance Hall, an opulent and beautiful, European-style performing arts venue, is home to the Fort Worth Symphony Orchestra and the Fort Worth Opera as well as the Texas Ballet Theater. It also hosts Broadway shows, concerts and more. But Bass Performance Hall is much more than a stage. It is a champion of arts education and serves as the “classroom” for its Children’s Education Program, which offers tickets to matinée shows and four summer camps to area students — all free of charge.

The summer camps — two choral, one percussion and one theater tech (in which students learn about backstage mechanics) — are underwritten by Performing Arts Fort Worth (PAFW), which operates Bass Performance Hall, and made possible through private donations and foundations.

A Village of Partners 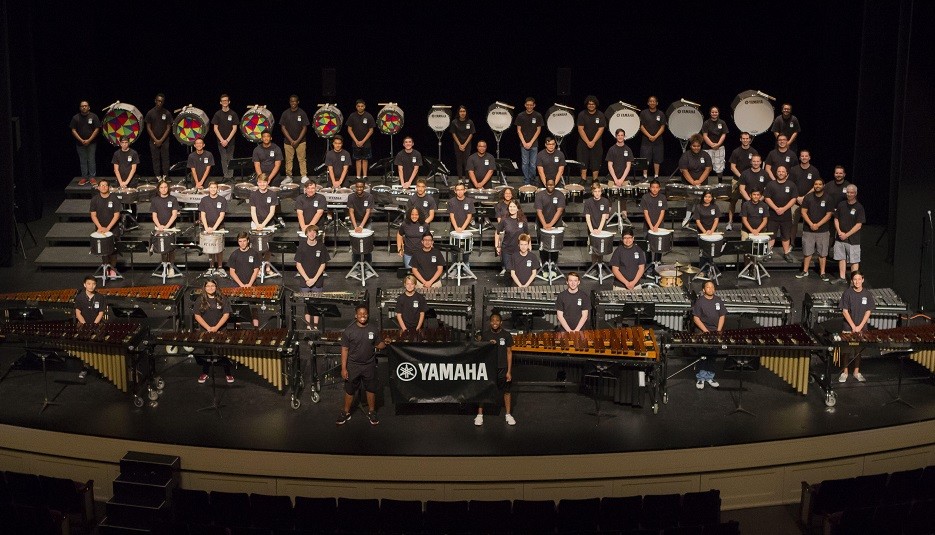 The five-day High School Percussion Camp brings 75 students from Title 1 schools to Bass Performance Hall. The camp is built on a strong partnership between PAFW and the Fort Worth Independent School District (FWISD). Local educators support the camp while sponsors such as Yamaha, Innovative Percussion, Marimba One, Sabian and Remo provide financial support.

Oftentimes, the camp participants have no dedicated percussion instructor on staff at their schools. “They [have] never worked with a professional musician other than their band director or choir director,” says Sue Buratto, The Children’s Education Program director.

The camp recruits well-regarded local educators as volunteer instructors. “We have an amazing staff of top educators from around the Fort Worth area who teach at the camp,” says Dr. Brian A. West, the camp’s director as well as the coordinator of percussion at Texas Christian University. “These include university professors and public school educators from FWISD and from other local school districts.”

The camps also receive support from friends, family and foundations. “Our development department has been very successful in finding families and foundations in the area that want to help with these kinds of programs,” says Buratto, who started The Children’s Education Program 20 years ago.

Most camp participants are in the free or reduced lunch program at their schools, so PAFW feeds the students as well as transports them to and from the camp. Feeding 75 campers can be an expensive undertaking. Luckily, area food banks and college cafeterias are always searching for ways to keep their staff employed during the summer. They donate sandwiches and bottled water to the camps. Corporations donate snacks. “It is a total partnership; it truly takes a village,” Buratto says.

West advises music directors who want to form similar camps to partner with local educators, school districts, universities, performing arts organizations, local music vendors, music corporations and anyone else who could support their endeavor. “Having support from a broad variety of sources is very helpful with this kind of project,” he says. 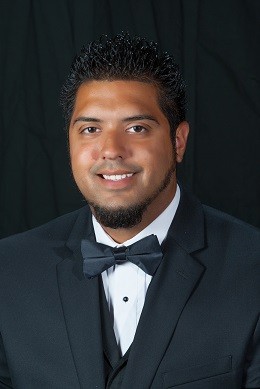 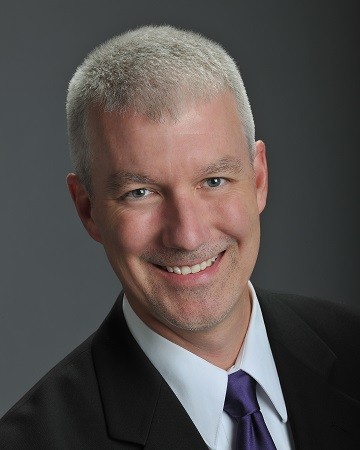 PAFW and FWISD staff members work together to coordinate the transportation of campers to and from Bass Performance Hall, meeting throughout the spring to strategize on pick-up and drop-off locations and bus routes. Logistics, Buratto says, is one of the most laborious facets of running the percussion camp.

Each year Emmanuel “Manny” Flores, director of percussion at Southwest High School in Fort Worth, secures all the equipment necessary to run the camp. He is also one of seven volunteer instructors. “Without Manny, our camp would have a very hard time running,” West says. “While the camp does own a wonderful set of Yamaha drums, we need many more instruments for the students to perform on. We borrow instruments from some of the FWISD schools. This is a key partnership and a large part of our success.”

West and the instructors are not the only volunteers on hand for the week. Over the years, a dedicated core of volunteers, some of whom have grandchildren in the camp, work to distribute music, paperwork and food during camp hours. They also guide students to sectionals.

“[Volunteers] create a safe environment for students, so all they have to worry about is making music,” Flores says. 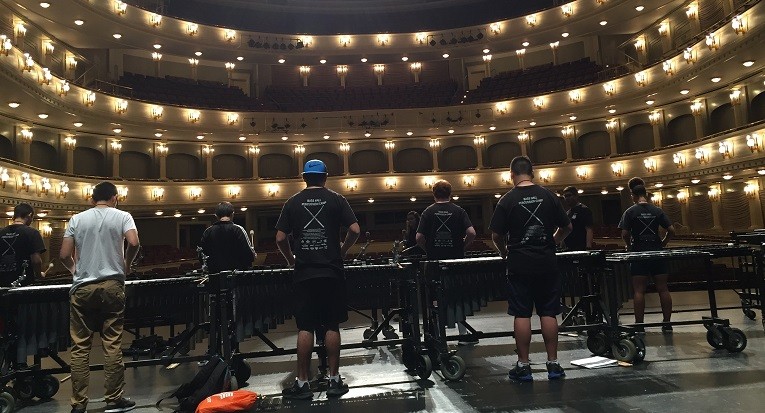 Buratto started Bass Performance Hall’s summer percussion camp in 2014 after learning about the frustrations of band directors, who “felt that many times the rhythm section, which is, after all, the backbone of a large ensemble, was a little lost in the shuffle of trying to get the clarinets to play on pitch and getting the trumpets to attack together,” Buratto says.

Only 25 students signed up that first year. “Students didn’t want to give up a week of their vacation,” Buratto says. Now percussion camp is “a thing to do,” she says.

The camp has been successful for two reasons, according to Dr. Jim Yakas, who directed the camp until 2016.

First, Bass Performance Hall and FWISD bought into the concept from the beginning. “This made the job of the camp directors and staff very easy,” says Yakas, who is now the director of percussion studies at VanderCook College of Music in Chicago.

Second, the camp’s staff comprises local music teachers, who then encourage students to attend. “We understood the importance of providing a great experience for the students the first year, so the word would get out that this was an amazing camp,” he adds.

Yakas advises young teachers to connect with students outside of their own schools. “Find ways you can use the power of the arts to have a lasting, exponential effect on your community,” he says. 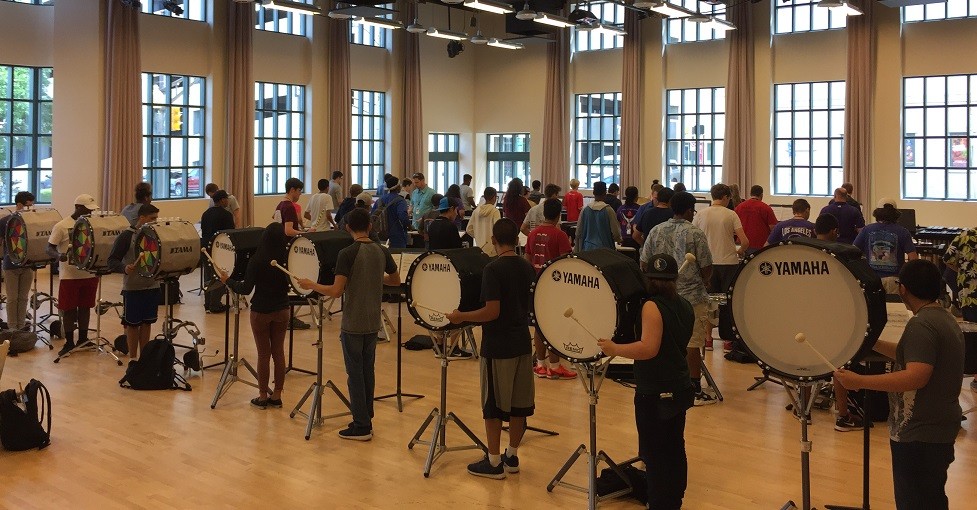 Music instruction is not the only thing that the percussion students receive during their week at camp. “The staff at PAFW, the camp staff and all of the volunteers shower these students with attention, education and love,” West says.

The Children’s Education Program summer camps have served more than 4,000 students since their inception. The success of the percussion camp, however, is not measured solely by the number of students it has served. Campers grow as musicians and as individuals, rising above challenging personal situations.

“We work hard to discuss leadership skills, professionalism and a much broader array of topics,” West says. “We’ve seen so many students grow into leadership positions at their schools and continue to develop as young adults.”

Some students, says Flores, come from schools that don’t have percussion directors, making their percussion units auxiliary to the band. “When they come to camp and start to really dig in, they see all the great things that percussion provides,” he says.

group photo by Kayce Pulliam; all other photos by Brian A. West