After a rocky start, Janis Stockhouse embraced jazz and built a successful program at Bloomington High School North in Indiana.

Janis Stockhouse’s confidence was high on her first day as director of bands at Bloomington High School North in Indiana. Then her jazz students showed up. “They were tossing out vocabulary and words, and I was stumped,” Stockhouse says. “It made me feel really bad that I couldn’t teach them anything. I wanted to run home.”

Stockhouse was so rattled that she tendered her resignation a month later, but fortunately her principal refused to accept it. Instead, Stockhouse persevered and immersed herself in the jazz world, teaching herself not only to appreciate the art form but also to excel at it. Since then, she and her jazz ensembles have received numerous awards and accolades.

When Stockhouse accepted the director position at Bloomington High School North in 1981, the school was only 10 years old, but its music program was already shrinking. Replacing one and a half directors, Stockhouse taught two jazz bands, two concert bands and the marching band — five classes in all.

Knowing she was destined to be a band director, she had immersed herself in the concert and marching band programs while earning a music degree at Indiana University, but she had no interest in jazz. “I didn’t know why it sounded like it sounded,” she says. “It was kind of foreign to me, the long solos. I didn’t understand what was going on. If you don’t understand something, then you often don’t like it.”

But while at Bloomington, Stockhouse knew that she owed it to her jazz students to learn all she could about jazz. “I had to figure out what jazz is, what’s improvisation?” she says.

She sought help from David Baker, the late renowned jazz composer and professor from Indiana University’s music department. He agreed to come out to teach her jazz classes. “You would have thought it was the dream jazz band,” says Stockhouse. “He knew what tunes to pick, he knew how to teach and relay things. I just sat in the back of the room and watched.”

Baker schooled Stockhouse on jazz articulation and modes, or variations on scales. He told her to listen to Miles Davis’s “Kind of Blue“. She bought the album that night. As she listened, she took notes on what the rhythm section was playing and how the soloists were improvising. “It was like a whole world opened up to me,” she remembers. “I must have listened to that album five times that night.”

Get in the Groove

To further increase her knowledge of jazz, Stockhouse would visit the local music store, picking the brain of the owner. With so many CDs to choose from, she was overwhelmed at first and wondered what would be the next logical progression after “Kind of Blue.” She found “Maiden Voyage” by Herbie Hancock. 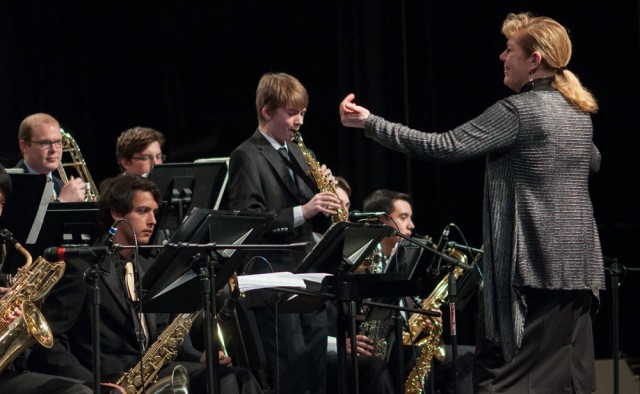 “‘Kind of Blue’ was the late ’50s and then ‘Maiden’ the mid ’60s. There was a huge change in the performance of jazz between those two albums,” Stockhouse explains. After all, “jazz reflects society.”

In addition to poking around the local CD shop, every Monday night she would attend a jazz concert at the local college. With the evening’s program on her knee, she’d jot down the names of the pieces she wanted to try with her jazz ensemble. On Thursdays she’d go to the local jazz club to listen to gigs. She was searching for pieces that she could introduce her to small combos and looking for ideas on how to teach the art of improvisation. “I was really liking what I was doing,” Stockhouse reports.

Possibly the most important decision Stockhouse made on her journey to jazz band director came in the summer of 1982, when she attended a jazz workshop in northern Wisconsin. For two weeks she improvised in a jazz combo and in a big band. “After that I felt better; I felt maybe I know a little bit now, and I could compose a blues for big band and arrange it. I learned a lot about history and all the different kinds of styles and repertoires. It was comprehensive. It was fantastic. My anxiety was more or less gone even though I was still a newbie.”

Over the years Stockhouse continued to grow into her jazz director position by attending endless conventions and clinics and asking a lot of questions to the jazz artists. She still seeks out as much live jazz as she can and reads countless books on the subject. “It’s an endless passion,” she says.

Several years ago Stockhouse co-wrote a book about female jazz musicians, titled “Jazzwomen: Conversations with Twenty-One Musicians.” Through the process of interviewing these talented musicians, she learned a great deal about jazz studies and jazz performance.

Bloomington’s four jazz ensembles are leveled not by grade but rather by ability. Ninth graders can play in the top ensemble if they have the chops, but for the most part, students progress through the four levels. Jazz ensemble classes at Bloomington are 90 minutes long. Stockhouse spends two-thirds of that time teaching big band charts. The rest of the time she works on improvisation, memorization, scales, patterns, transcription of pieces into other keys, listening skills and jazz history.

Her favorite activity is to take an arrangement of a big band chart that has an open solo section, such as “Blue Bossa,” and require the entire band to memorize the head, or main theme, as well as the chord changes. She insists that her students listen to various artists’ interpretations of the tune and the solos so they can gain an appreciation of Dexter Gordon’s version.

Chris Parker, who studied under Stockhouse from 2011 to 2015 and is currently studying jazz and music education at Indiana University, says Stockhouse really stresses listening to the music, a skill often overlooked by other jazz educators. One time Stockhouse played a recording of Count Basie’s “It’s Oh, So Nice” and turned the lights off in the jazz room, Parker recalls. She asked her students to tap their toes and “feel the music,” he adds.

During the chorus, Parker says that Stockhouse had her students stand and walk around the room to the beat. Being high school students, many were shy and reserved. “But by the end of it, everybody was really into it. The difference between before we did that activity and after we did it [was startling]. We were a million times better as a whole. We were feeling the beat more because we were able to move to it. She understands you have to listen to the masters to perform jazz at a high level.”

Stockhouse takes her ensembles to participate at festivals; however, she never puts pressure on her students to win and views these events more as learning opportunities than competitions. “Students love performing; they also enjoy traveling and hanging out with each other,” she says. “And if there are clinics and live concerts, it’s fun to see how they react to these and how some get extremely motivated. Live music is so much better than just listening to YouTube.” She also encourages her students to take risks through improvisation, a skill she teaches through scales. As students become more familiar with the scales and their instruments, they gain the technique necessary to improvise.

Learning to be a jazz improviser could possibly be the pinnacle of what a student can experience as a teenager in high school, Stockhouse says. “For those individuals who have the mind and know their instruments and have fallen in love with jazz, it’s what they live for. I’ve seen that with so many students. It’s everything to them. They love it. It’s so creative.”

In addition to learning to improvise, jazz students need to form combos. These smaller groups allow rhythm players the opportunity to learn volumes about the music and about performing, Stockhouse says. To date, Bloomington jazz ensembles have performed at the International Association for Jazz Education (IAJE), Jazz Education Network (JEN) and Midwest Clinic conferences. Bloomington has also won the Lionel Hampton Jazz Fest at the University of Idaho on many occasions.

The key to building a relevant jazz program is to integrate it into the high school curriculum rather than beginning it after marching season or making it an extracurricular activity, according to Stockhouse. “If you don’t start your jazz program until after Thanksgiving, all you’ll be able to do is teach three pieces of music,” she says. “You won’t be able to teach improvisation because you don’t have time. Having it in our school day has been our saving grace.”

Stockhouse generates excitement for her jazz program by exhibiting her palpable love for jazz to her students. That’s not hard to do when she owns more than 2,000 jazz CDs and tunes her radio to the jazz station 24/7. She introduces her freshmen to high-energy music, like “Watermelon Man” and “Cantaloupe Island,” explaining, “Herbie Hancock is a good entry level for 14-year-olds.”

Another way to ensure a jazz program’s success is to physically separate it from the concert and marching bands. In 2005 Bloomington built Stockhouse a jazz ensemble room. Before then, her jazz students set up in the corner of the band room. The drum set, the piano and amplifiers were always in the way of the concert band. “Now we have a room dedicated to our jazz ensembles. It made a huge difference,” she says.

Since discovering her own personal passion for jazz, Stockhouse has made it her goal to keep jazz programs relevant in Indiana. When IAJE came to a close in 2008, Stockhouse looked for ways to preserve a statewide coalition. She teamed up with a group of educators to form the Indiana Jazz Educators Association (IJEA) and has served as a president of the organization.

The goal was to keep all-state jazz ensembles and jazz combos moving forward. “We succeeded,” Stockhouse says. “I worked pretty hard for five years organizing things.” For all of these efforts in the classroom and in the greater jazz world, Stockhouse received the 2015 John LaPorta Educator of the Year Award from JEN and was named a 2014 Jazz Hero by the Jazz Journalists Association.

In addition to building Bloomington’s jazz program, Stockhouse also ran the school’s marching program for 20 years. Today the marching band is under the direction of Thomas Wilson, although Stockhouse still heads up the brass section. The Bloomington North Cougar Marching Band has marched in the Tournament of Roses Parade and the Macy’s Thanksgiving Day Parade and has finished in the top 10 in Indiana State School Music Association (ISSMA) competition 10 times. The Symphonic Band has also been an ISSMA finalist for all but two years since 1985.

When Stockhouse accepted the director position at Bloomington, jazz was a mystery to her. Today, it’s a significant part of her life. Through hard work, open mindedness, and perseverance, Janis Stockhouse and her ensembles have transformed into jazz powerhouses.

“Jazz is America’s contribution to the world of music,” she says. “Jazz is passion combined with genius and creativity.”

This article originally appeared in the 2017 V1 issue of Yamaha SupportED. To see more back issues, find out about Yamaha resources for music educators, or sign up to be notified when the next issue is available, click here.