An instrumental elementary music teacher in New York finds outside funding to buy instruments, equipment and accessories for her program.

When Heather Taylor became the band director at Lakeshore Elementary School in Rochester, New York, in 2018, she had an $80 annual budget.

“That’s literally less than $1 a kid,” says Taylor who teaches about 140 students in 4th and 5th grades out of 420 students overall in grades 3 to 5. Each band student participates in a full concert ensemble for two days before school and receives small group instrumental lessons once per week during the school day. 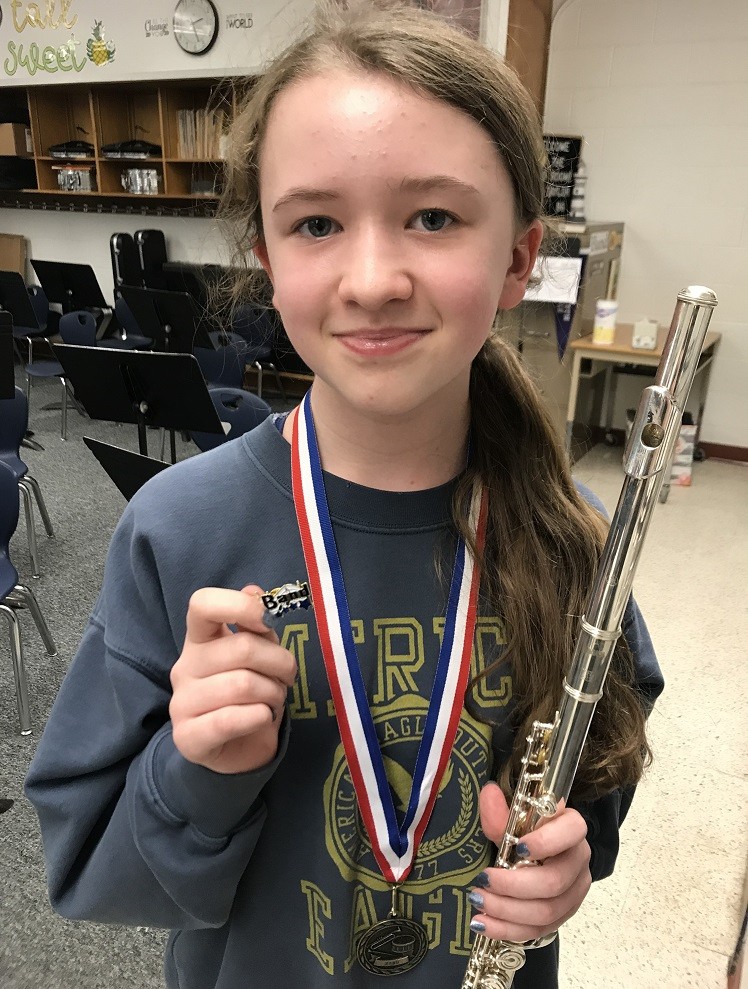 Instead of lamenting on the small budget, Taylor went to work to find outside funding and has received nearly $20,000 in donations in the past four years.

“As hard as it was to be in so many different positions in [seven] different buildings, it did help narrow my focus [to find] where my passion was,” Taylor says. “Now that I’m in an elementary setting, I know that this is my niche where I do my best work. I’m starting kids on their musical journey. … I find elementary school to be a much more community-centered learning environment. … [Students] are very eager to learn to make music.”

Taylor’s initial priority at Lakeshore was to secure quality instruments. “The equipment I had was in really bad shape — literally duct-taped together — and somebody had written all over the drumheads,” she says. “I had no trumpets, no saxophones and just a few flutes and clarinets.” 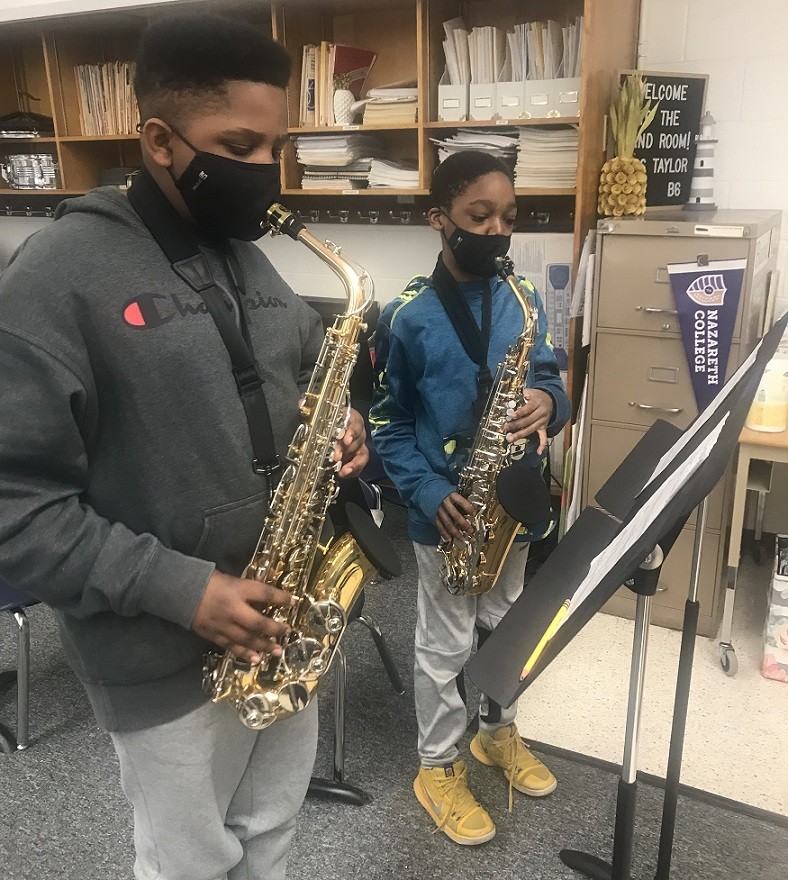 While the school provides students with the larger and more expensive instruments, such as French horns, baritones, tubas and oboes, families are typically expected to rent more popular and smaller instruments like flutes, clarinets and saxophones. However, Taylor says that situation created equity and balance problems.

“It’s difficult to [balance the instrumentation] if I don’t have an instrument, and people can’t go rent,” Taylor says. “I didn’t want students’ home situations to prevent them from participating in music.”

At Lakeshore, 100% of students receive free or reduced lunch. Lakeshore is a designated Community School that provides additional services such as district-level before- and after-school childcare, after-school clubs, mental health services and partnerships with local food and clothing donation centers.

To help level the playing field for all prospective and current musicians, Taylor sought grassroots funding opportunities. She found the school budgeting approval process to be long and arduous. “There’s no part of being in music that isn’t expensive,” she says.

Soliciting funds through external organizations proved to be easier than expected. Through some internet searching, Taylor discovered that the local grocery chain Wegmans supported the community in a variety of ways and welcomed donation and sponsorship requests. Taylor submitted a request for $1,300 to buy instruments and was approved.

From there, Taylor found more businesses, such as additional grocery chains, banks and bigger businesses, that had community development webpages with easy submission processes.

Taylor has since been able to receive enough funds to purchase at least a few of every type of instrument for students to borrow.

The more that Taylor became involved with community giving organizations, the more that she began following groups, individuals and initiatives through social media. A viral movement called #ClearTheList started by Texas elementary teacher Courtney Jones in 2019 encouraged teachers to create supply wish lists, often through Amazon, for community members to fulfill them. When the movement hit Twitter and became a not-for-profit foundation, it exploded even more. 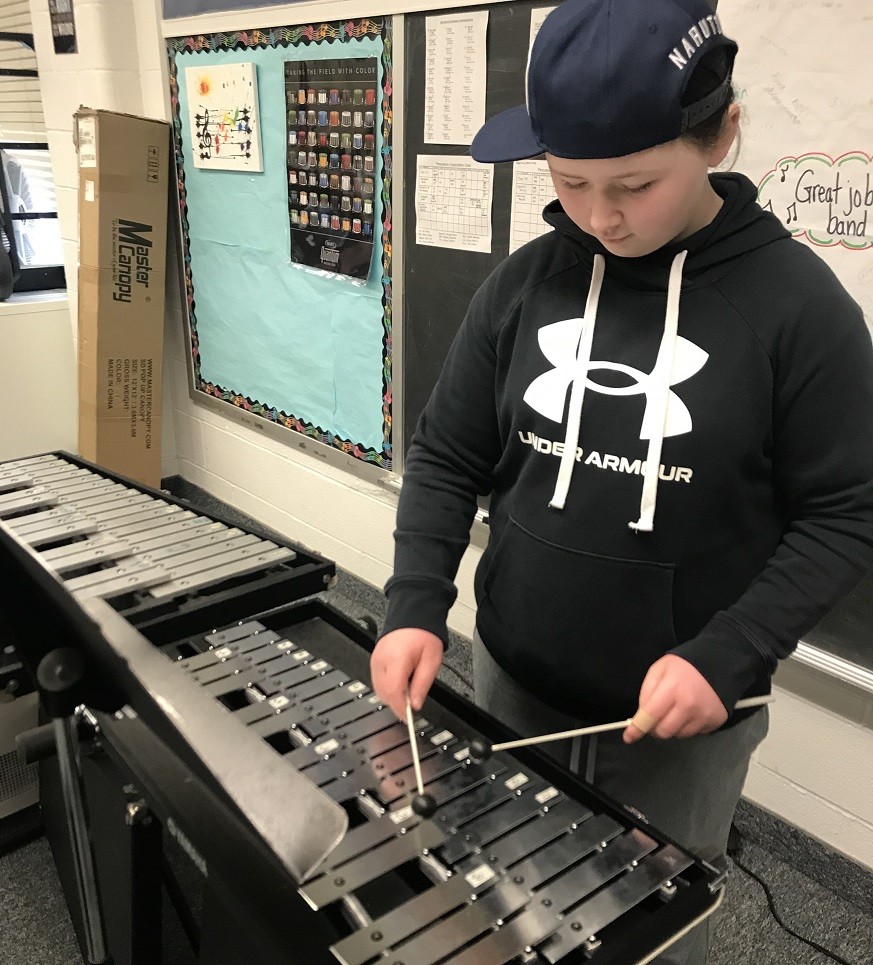 Taylor initiated her wish list with requests for mouthpieces, reeds, neck straps, valve oil, cork grease and lessons books. She would always attach a picture of her with the students. “Having an action photo with kids playing instruments tended to grab people’s attention,” she says.

She later added more expensive instruments and equipment, such as a flute, percussion accessories, an amplifier and an office chair. She noticed a tweet from Chip Gaines from the television series “Fixer Upper” that encouraged his followers to help people for the holidays in December 2019. Taylor reached out to him and received a message back through Twitter from his assistant who purchased everything from her wish list. “That’s the first time that my list was cleared,” Taylor says.

T-Mobile also saw one of Taylor’s wish lists and cleared it.

Taylor makes sure to actively thank her donors and to tag them in social media, if possible. To show appreciation to Gaines, she filmed a thank-you video of her students opening the new items and posted it online. “[Chip] liked it, and he might have retweeted it,” she says. “Always thank your donors … because then they’re more likely to [give again]. I always try to have pictures or show through social media that my stuff is being used … by a current student, so they know that they made this positive impact.” Taylor is also active with DonorsChoose and has found a network of music-specific philanthropists with the group Music Makes Our Students Smarter Giving Page (run by retired Indiana music teacher Ellie Henry), which is active on Facebook and Twitter. “I’ve never had a project not get funded … if I tag them in it,” she says.

On DonorsChoose, Taylor focuses on campaigns that have more specific purposes, such as requesting a document camera to teach during COVID, light-up drumsticks to use for cardio drumming, a music stand storage cart, end-of-year awards and instrument repair tools. Taylor says that she keeps most projects under $500, so that they’re more likely to be funded.

Through the years, Taylor has received approximately $10,000 in products from #ClearTheList and at least $5,000 to $10,000 in items from DonorsChoose. “Altogether, I’ve had 16 projects completed [on DonorsChoose] since August 2020.

Taylor advises educators to follow as many people, organizations and companies as possible, even those that are not directly related to their field. For example, Taylor follows science companies and won a projector for submitting a music lesson plan about the Olympic fanfare. “You never know if they’re willing to help,” she says. “Some oddball thing that has nothing to do with music got me a projector for my classroom when I didn’t have one.”

For all her efforts to enhance her classroom and support her students, Taylor has become a nationally recognized teacher.

The organization EdIncites recognized Taylor as one of 50 #FeelGoodFriday educators around the country in 2020 and was the runner-up for its #FeelGood2020 Educator of the Year contest.  “I was the only music teacher on the featured list,” she says. Of greater impact, Taylor was the Eastern Division recipient of the 2021 Dr. William P. Foster Project Community Development Awards and was recognized at The Midwest Clinic International Band and Orchestra Conference. The contest is organized by the Music Education Alliance, a consortium comprised of Music for All, the National Band Association and the College Band Directors National Association to create best practices, mentorship and awards for music educators. Taylor received her award in person thanks to her school district that fully funded the trip. As part of the award, Taylor received access to clinicians, free software and prizes from various music industry companies to help her classroom. “I’m very honored that I was selected,” Taylor says. “It opened my whole world to more people and more opportunities.”

In addition, Taylor was recognized as one of the Yamaha “40 Under 40” outstanding young music educators in 2022. And Taylor has received additional local awards. Within her own circles, Taylor has become a celebrity. In a 2022 teacher development day, Taylor led a session for approximately 30 music teachers in the district about how to get community grants.

Taylor finds that the awards and accolades make her visible to prospective students. “Every single 3rd grader knows my name and knows that I teach band,” she says. “In the hallways, I say, ‘Hi’ to them; I interact with them. For them to see or hear that I’ve won [these] award[s] is just another way to bring recognition to band.”

In addition, the district shared her awards on social media, and her alma mater Nazareth College in Pittsford, New York, interviewed her for an article. Taylor’s ties to Nazareth is strong. Every semester, she presents her seminar on how to get community grants to aspiring music education majors at Nazareth. “I’ve been very grateful for how nice everyone has been,” Taylor says. “It’s been very humbling. If this in any way helps my [students], that’s what I want it for.”

Indeed, having quality supplies and more resources have made a huge impact on the morale of her students. “They’re going to be way more invested to have a shiny saxophone versus a broken, rusted instrument held together with duct tape,” Taylor says. “The parents are thankful that they have a teacher who is getting their kids what they need and making sure that we have a successful program.” Taylor says that her biggest recruitment methods are the fun activities within the program itself. Her 5th-grade band students learn “The Star-Spangled Banner” and perform at a Rochester Red Wings minor league baseball game. “It’s a lot of work for a one-minute song, but I feel like it makes the most impact on my program,” she says. “It’s the thing they remember the most. … Just providing something outside of the traditional concert experience helps get some of [the students] to stay in the program or gets them excited to play their instrument.”

Taylor’s biggest piece of advice is to not be afraid to ask for help. While she has received a lot of support, she has also been denied. She makes sure to document all her applications and results. “Sometimes I understand how embarrassing or defeating it can be to ask for help,” she says. “You do a lot of work writing the [requests], and it doesn’t always pan out, but you never know when it will. … I document everything [and] reuse the same verbiage. … I’m very grateful that there are so many people in the world who want to support the arts.”