Two of the most beneficial tools to help students learn music more quickly and with a higher level of quality are slow practice and gradual increases of music difficulty.

Many young musicians focus on learning music quickly, which can develop a strong sense of motivation. However, the drive to learn quickly has some downfalls. As music educators, we must help our students learn to practice more efficiently and effectively — and that means going slow to go fast.

Many students pride themselves on moving to solos that require new skillsets, advanced techniques or superior dexterity. Students enjoy learning challenging pieces because it provides them with a sense of accomplishment. However, many students do not realize that progressing to significantly harder solos requires much more time in the practice room and more attention to detail than before.

There are two ways to resolve this problem. The first is to give students pieces that are just slightly more challenging. I also recommend that new pieces be in a completely different style/genre so there is a clear sense of change as well as in difficulty level.  Oftentimes, students will bring in a piece (let’s call it “Piece X”) that they want to play. You know that it will take them at least four to five months to learn Piece X. I recommend using your students’ enthusiasm to create a long-term goal for them. Instead of immediately moving them to Piece X, tell them to work on one or two pieces in between where their skill level currently is and where Piece X needs them to be. I call this the “stair method” and tell students to envision the stairs leading to the top of a football stadium. All those individual stairs make it easy to reach their ultimate objective through steady, gradual progress.

Another way to tackle Piece X is to break it into several smaller solos. Most pieces have three to four large sections, so treat each one like a separate solo. Work on one large section at a time, and do not let the student move to the next section until the first one is performance ready. This process allows students to take their time, which results in learning the music well and playing with high quality. The student will not be overwhelmed by the length of Piece X and can focus on the basics of music such as pitch, rhythm and dynamics. Too often, students wait to learn dynamics until they have learned the pitches and rhythms of a piece. This works against students because it reinforces the idea that dynamics are not important. Lack of dynamics is one of the most cited problems in student performances at solo and ensemble competitions. 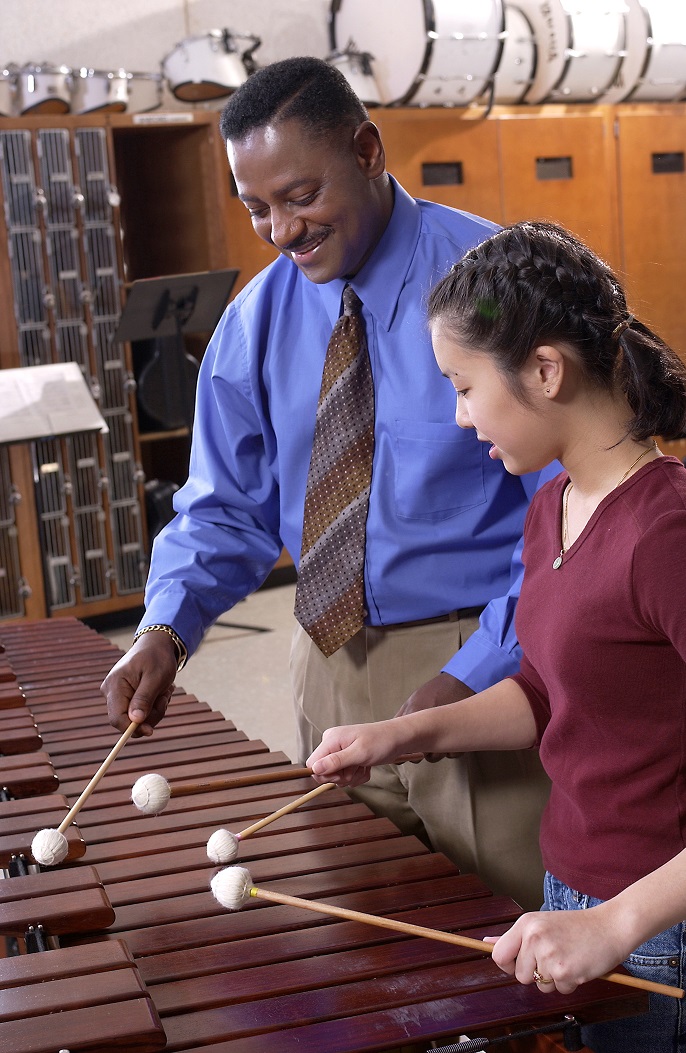 When students first enter college, many of them will consider a piece impossible because of the written tempo. This all-too-common occurrence reminds me of one of the most valuable lessons I learned as a freshman in high school. The senior section leader at the time told me that “every piece is easy if you take it slow enough.” This taught me that I could play anything if I take it at a slow enough tempo — usually half tempo or slower — to fully understand the rhythms, pitches and dynamics of a piece.

Many students believe practicing at a significantly slower tempo means they will never be able to play the piece at the written tempo. This is not true. What students need to understand is if they do not turn the tempo down to where the piece is easy to play and understand, then they will never build the essential foundation needed to perform the piece well when they get it to tempo.

I define the foundation of every piece of music as pitch, rhythm and dynamics. If a student cannot master all three with consistency (approximately four out of five times) at the tempo they are working at, then they should move to a slower tempo (approximately 15-20 bpm).

Example: Recently, I worked with students on “2” from Jacques Delécluse’s “Douze Etudes,” which is a snare drum solo marked at 100 bpm. Students usually drop the metronome to around 70 bpm when they first start practicing, but even at that slower tempo, they struggle to achieve quality ruffs, and they usually stumble over three bars — mm. 20, 24, and 30. (Side note: We use Rob Knopper’s sticking guides for “Douze Etudes,” which is why some of the students struggle with m. 20.)

It’s important to mention that those three bars are significantly more challenging than the rest of the piece. So, students often struggle with those bars at 70 bpm, while they play the rest of the piece rather well at that tempo. Students think that if they slow the metronome way down for those few bars, they will never be able to play them at the written tempo when performing the entire solo. It is crucial to show them that if they turn the metronome way down (somewhere around 40 to 45 bpm), those three bars become easy. I make students play one of those three troublesome bars three to four times in a row. If they play them with a high level of quality, I bump the metronome up by 5 bpm. I repeat this process (unless they stumble at a certain tempo, then we will work at that tempo or a couple of bpm slower) until we reach about 90 to 100 bpm. This total process usually lasts only about 10 to 15 minutes. During this short period of time, students realize that something they thought was impossible to play at a certain tempo is not the insurmountable challenge that they had initially thought. This type of extremely slow practice with small, incremental increases in tempo is one of the most valuable and effective methods of practicing challenging sections of music.

The last problem I want to look at is when students learn music too quickly. This is somewhat of an expansion on the first section of this article, “Extremely Challenging Music,” but it takes a slightly different perspective.

I find that students often learn too quickly when there is a barrier or track-style curriculum. Students see that if they can pass a piece, they get to move on to the next portion of the track. The problems is that the focus becomes getting through the track rather than learning pieces well and absorbing the different techniques, styles and challenges that a piece has to offer.

I find this usually happens when a piece is marked as an “etude.” The first thing I recommend doing is to reorient your students’ way of thinking about music by talking to them about what an etude is. An etude, in my opinion, is a small piece of music. It is not meant to advance a small skillset, but instead, is a short piece of music that gives students the opportunity to be extremely musical and expressive without having to learn a lengthy solo.

Example: I usually encounter this scenario when students start to work on multi-percussion solos for the first time in their sophomore year at Stephen F. Austin State University. When my students think of multi-percussion, they typically envision huge set-ups that look like Terry Bozzio’s drumset or pieces that are aggressive and exciting like Iannis Xenakis’s “Rebonds.”

So, when my students start on a piece for two toms that’s only a page and a half long (Michael Udow’s “1” from “The Contemporary Percussionist”), they tend to either rush through it and play wrong rhythms, stickings and dynamics, or they get disheartened because the think the piece boring. That’s when I perform the piece and show them how exciting, theatrical and musical a piece for two toms can be. Hopefully, they will realize that there are many small steps they need to take before they can attack the challenging pieces they yearn to play. 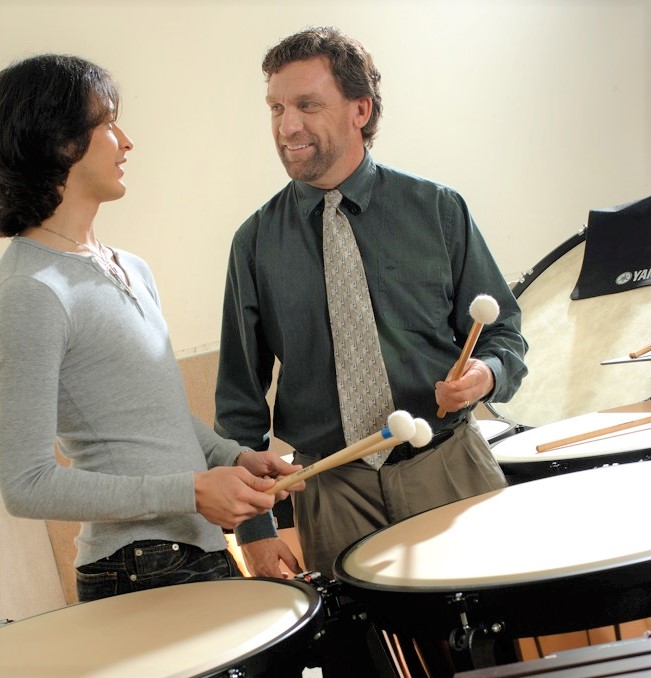 I remind my students that percussionists do not start playing Andrew Thomas’s Merlin as their first four-mallet piece. There’s a reason why everyone knows Mitchell Peters’s “Yellow After the Rain” because it is a great piece of music that is appropriate for percussionists just starting out on four-mallet marimba. I add that I love hearing performances of “Yellow After the Rain” when it is played well with expression, dynamics and musicality. To prove it, I show them Jisu Jung’s fantastic performance of “Yellow After the Rain” on YouTube. I would much rather watch her impressive performance of this less technically challenging piece over someone playing Joseph Schwantner’s “Velocities” above tempo and poorly.

Going faster isn’t always better. When it comes to many aspects of learning and performing music, speed can hinder students from reaching their maximum potential. As music educators, it is our duty to show them how important slow practice and the gradual advancement of musical difficulty will benefit them in the long term.

I use these three quotes about speed with my students. I hope these quotes will resonate with your students like they do with mine.