Craftsmanship and innovation in perfect harmony.

There is nothing quite like the joy of playing a real piano. The feel of the keys and the beauty of the tone — produced by felt hammers striking metal strings resonating through a massive wood soundboard — is an experience that is difficult to replicate with a purely digital keyboard.

When shopping for an acoustic piano, you should of course pay close attention to the touch and tone of each instrument that you audition. Naturally, you’ll also consider the instrument’s size, durability and style and finish of the cabinet, as well as the cost.

But there are other important issues to consider when it comes to today’s pianos, where technology can play a major role in your enjoyment of the instrument you purchase. In this article, we’ll take a look at some of them. 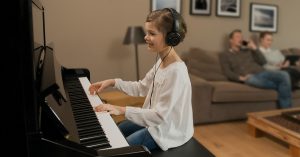 Wouldn’t it be great to be able to play your piano whenever you feel like it — and not bother neighbors or members of your household?

Imagine that you could put on headphones and play the very same grand or upright piano you’ve fallen in love with – and not be heard by anyone!

This is a feature you can find on some modern acoustic pianos, including numerous Yamaha models such as the Disklavier™, SILENT Piano™ and TransAcoustic™. In fact, nearly every size of a grand and upright piano that Yamaha makes is available in at least one of these series of technology-equipped instruments. There are even two Bösendorfer models available as Disklaviers.

Here’s how it works: When you engage silent mode, a bar inside the piano that prevents the hammers from hitting the strings is automatically moved into place. Remarkably, the action feels exactly the same — the only difference is that there is no sound of hammers hitting the strings. Instead, when you put headphones on you’ll hear the digitized sound of a real concert grand piano — a sound that matches the expectations of your ears and enables quiet, private enjoyment of your instrument.

Or suppose you’d like to play without headphones but somehow turn down the volume. Of course, you could lower the lid of the piano, but that only gets you so far. How about having a volume knob that can do the job?

The Yamaha TransAcoustic piano does just that. By injecting the sound of a digitized 9-foot concert grand piano directly into its own soundboard, you can alter the blend of the two to your liking, giving you a variety of options:

– Get your piano in tune… even if it’s actually out of tune. Turn on the Silent feature (so the hammers don’t hit the strings) and send the digitized sound of the concert grand into the soundboard. Instant perfectly tuned piano!

– Ready for quiet practice? Just put on headphones and enjoy the concert grand experience all to yourself.

– Go back to the totally “pure” sound of the piano itself. Easily accomplished: Just turn off the digitized sound. 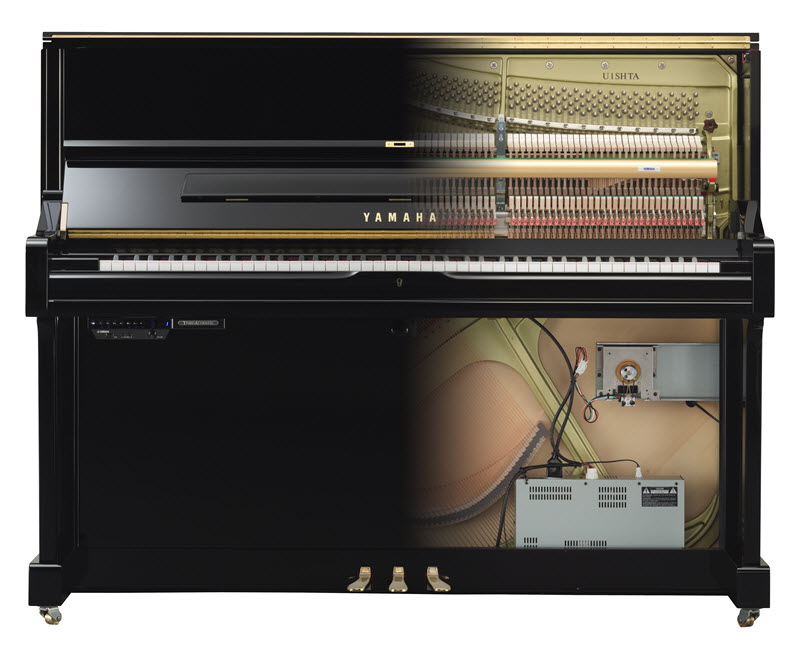 The Silent feature can also be used in the exact opposite way: to amplify your piano. This allows you to easily perform in a large public space, such as a church or performance venue where the acoustics require amplification. As an alternative to using microphones, you can connect your instrument directly to the venue’s sound system.

Interact With Your Apps If you’ve been to a concert or two in the last couple of years, you may have noticed that sheet music is going digital. It’s not uncommon to see musicians reading music off a tablet instead — the same kind of tablet, in fact, that you may already own.

A tablet can replace hundreds or even thousands of printed pieces of sheet music, plus it fits nicely on the music desk of any acoustic piano. Add a wireless connection between the piano and the tablet — another feature you’ll find in several Yamaha models — and your playing can interact with the music on the screen. You can then use an app that helps you learn a piece, or one that provides a musical accompaniment that actually follows your playing.

Not only does Yamaha provide a way of connecting acoustic pianos directly to these interactive apps, we’ve pioneered a method of doing so wirelessly, using a Bluetooth® MIDI adapter called the MD-BT01.

Creating a beautiful audio recording normally requires a combination of expensive microphones, careful mic placement and audio expertise. Yet some of today’s pianos allow you to make an audio recording without external microphones.

Most Yamaha technology-equipped pianos offer this feature. The basic idea is that the piano uses its internal digital sample of a 9-foot concert grand to turn your playing into an audio recording. The recording is free of room noise and hiss and will always be in perfect tune — even if the piano itself is actually out of tune. Enjoy Performances from Artists the World Over

Let’s take things a step further. How about the idea of inviting fine artists from around the world into your home — virtually — to play your piano, at any hour of the day, any day of the week? That’s something you can do if the acoustic piano you purchase includes a record-and-playback system.

The full-featured Disklavier models offered by Yamaha have such a system. This means that you can record yourself and the piano will actually reproduce your performance by moving the keys and pedals the same way you did when you played! This also gives you the opportunity to play back recordings that were made by other people on other pianos. For example, you can enjoy a piece of music being performed by a master artist or the original composer, or you can practice a piano duet by playing along with an absent partner.

The controls offered by the Disklavier are quite extensive. You can adjust the speed of playback or transpose the performance. You can even use a mobile device to record yourself with synchronized video or to enjoy a live concert that is streamed to your piano from a distant location.

Just a few years ago, these would be the makings of science fiction. Today they are reality. So when you’re ready to purchase an acoustic piano, be prepared to enter a brave new world. These aren’t your grandmother’s pianos!

Get 0% financing on a new Yamaha piano this holiday season. Click here for more information and to find a local dealer.