“D minor … is the saddest of all keys, I find.”— Nigel Tufnel 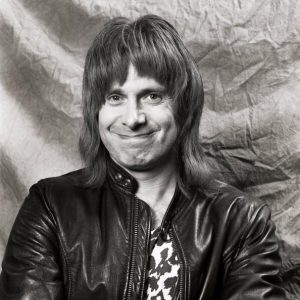 Nigel Tufnel in a pensive moment.

In This is Spinal Tap, the 1984 mockumentary about a fictional heavy metal band, fictional guitarist Nigel Tufnel proclaims that Dm is not only the saddest of all keys, but that “it makes people weep instantly.” I don’t know about the “saddest” or “weep instantly” parts, but Dm is indeed a sad key.

The idea that key signatures evoke certain emotional responses has been widely accepted by musicologists (and many musicians, too) for literally centuries. Jared H., founder of LedgerNote, posits that all 24 commonly used musical key signatures have a distinct personality. For example, A major is “youthful cheerful,” Bm is “patient and calm,” D major “triumphant,” etc. (Check out music theorist John Mattheson’s full list of keys and their corresponding characteristics here, and Howard Massey’s “Editor’s Corner” blog on the subject here.)

It certainly is a fascinating thing to consider. And to my ears (and I think the ears of most people), if you play pretty much any song in two or three different keys, you can hear a subtle shift in nuance. So shouldn’t we keep that in mind when sitting down to write a song?

Well, I have to be honest: I’m just not the kind of writer who asks herself how I’m feeling in order to determine the key in which I’ll write about those feelings. My hands have an inner accord with my emotions and they fall where they may on the ivories. I trust them. If I’m feeling melancholy, they know better than to aim for G major. Maybe this is due to the fact that they’ve been doing this for so long, they know the drill. That said, when I’m writing on guitar, there are certain keys I default to simply because the fingerings are so easy to play — E or Em, for example. I can just throw a capo on if I need to go higher — one of the things I love about guitar. (Try doing that with any other musical instrument!)

Perhaps adhering to a key’s corresponding characteristics is a more useful tool when composing instrumental music only — that is, when one isn’t also using their voice as part of the writing process. For me — someone who invariably sings while they write — it helps if a key and its tonal center are compatible with my vocal range. Where does my voice sound most expressive? Where are my sweet spots? Of course, singing/writing/demoing in my optimum key isn’t necessarily the best solution if my goal is to get that song covered by a particular artist. If that’s the case, it behooves me to do some research to determine where that artist’s voice shines, then record the demo accordingly.

Which is not to say that an artist only listens for songs they can sink their lungs into; many will connect, even if the recording is in a less than optimum key for them, and then transpose it to suit either their vocal range or the emotions they felt. Take Adele choosing to cover Bob Dylan’s “Make You Feel My Love,” which he recorded in D♭ major — “grief, depressive.” I can only assume that the song itself obviously and understandably pulled hard at Adele’s heartstrings. When she recorded her own version in the key of B♭ major (“hope, optimistic”), it made me cry even more.

Speaking of covers, there are many people who believe that cover songs should always be performed in the key in which they were written — the familiar, accepted and wholly embraced key. I disagree. Isn’t a cover supposed to be a different take on the same song? In fact, I think the ear perks up when it hears a song in a different key with a fresh tonal center.

I don’t doubt that there is some credence to the idea that key signatures evoke certain emotional responses. But must that absolutely dictate how we write? I don’t think so. It’s just not as simple as pairing a wine with an entrée. (Of course, that’s a matter of taste too … ☺)

Like beauty is to the eyes of the beholder, music is — to the ears of the beholder — subjective. And as with most things music, there are no rules, just different considerations to ponder.

(On a personal note, if you haven’t seen “This Is Spinal Tap,” what are you waiting for? It’s required viewing for anyone in the music business. I’ve seen it at least a dozen times and I think I may watch it again tonight.)

What’s That Weird Sound?
Getting Amplified