In last month’s installment of “The Well-Rounded Keyboardist,” we began our exploration of jazz harmony and voicings. In that article, we mentioned that, when you play in a band context, the bass player will usually be covering the root of each chord so you are generally free to leave it out in order to make room for more color tones (the 9th, 11th and 13th). Let’s take a closer look at how you can do this.

Jazz musicians commonly call the act of playing two-handed chords behind a vocalist or instrumental soloist comping — taken from the word “accompany.” There are many approaches to playing two-handed voicings, but let’s begin with some that don’t double any of the notes so you can clearly see how they are built. We’ll start with a Major seventh chord:

The first four voicings all use the 3rd, the 5th, the Major 7th and the 9th. The low C wouldn’t be played by you — it would be covered by the bass player. But for the sake of this lesson, you should play it and then try each voicing above it to hear the tonality, as I do in the audio examples. Can you hear how open these chords sound? They add a lot of color without sounding like plain triads and seventh chords.

To save some clutter, I did not go through all the possible variations of the 9th and 13th, with some of the typical notes changed. (In jazz harmony theory, these are known as alterations.) You should try them with the flatted ninth (D-flat instead of D natural), the sharp ninth (D-sharp) and the flatted-thirteenth (A-flat) as well. Figuring out those voicings for yourself is a good way to help absorb these concepts.

Next, let’s explore the minor 9th chord, with the flatted seventh as well as the Major seventh:

Next, the minor seventh with the flatted fifth, commonly called a half-diminished chord. I am showing these with both the natural ninth (D natural) and the flatted ninth (D-flat):

Finally, let’s take a look at a suspended fourth chord:

Rootless Voicings Used In A Tune

Of course, these voicings sound much better when they are used to play a series of chords, so let’s apply them to the same standard tune we used in last month’s column: “Autumn Leaves.” Here are the first 15 bars, played this month in G minor:

I added a little rhythmic interest, and I am showing the root tones below the voicings, but you don’t need to play them.

In this first audio clip, I play the root tones with an acoustic bass sound:

In the second version, I have the bass play walking lines to let you hear how this would sound in a real performance:

By playing all the notes of your rootless voicings in your left hand, you are free to play the melody of the tune (or solo) with your right hand. This concept of left hand voicings was first introduced by the great jazz pianist Bill Evans, and has become a standard way of comping (there’s that word again!) when you take a solo. Here are some common left-hand voicings for the various chord qualities. First, Major, with an acoustic bass playing the root tone so you can hear the chord voicing in context:

Don’t forget to explore the flatted and sharp 9ths as well as the flatted 13th on your own!

Here are some minor 9th voicings:

And finally, the fully diminished:

To wrap things up, let’s apply these left-hand voicing concepts to “Autumn Leaves” again, while playing the melody: 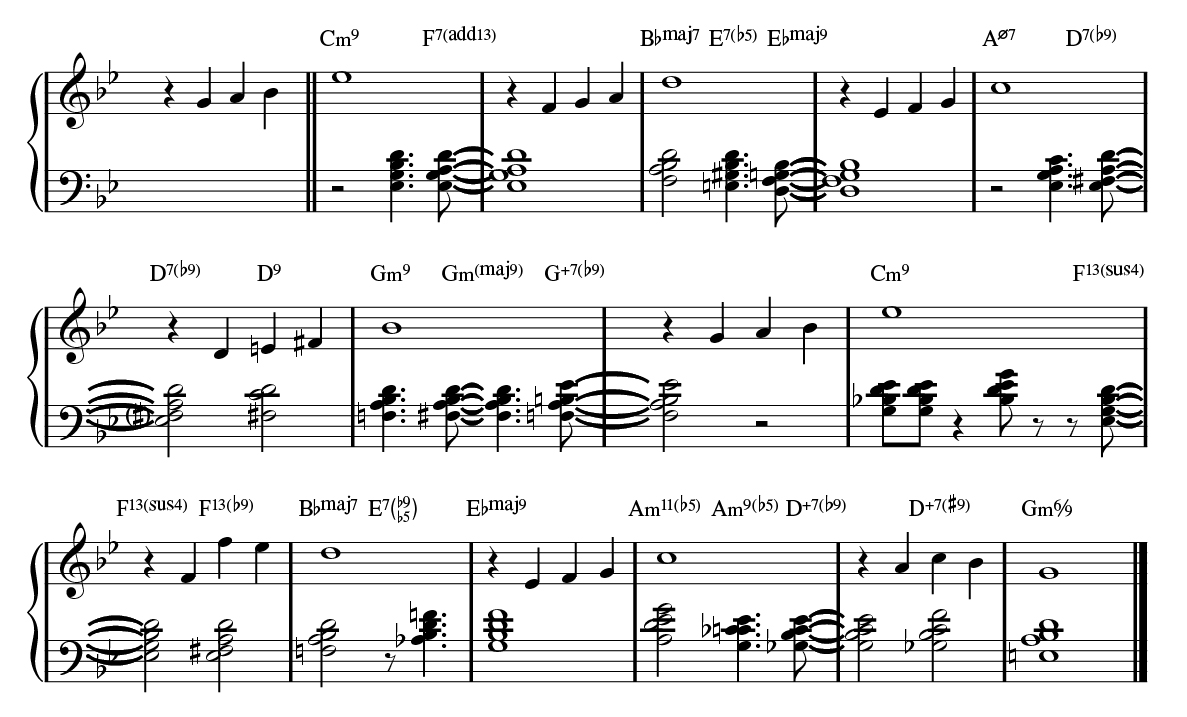 Notice how I added rhythmic interest, plus some movement in the left hand voicings for variety. I also again added acoustic bass to hear the example in a performance context.