When you’re recording digitally, the higher you set the audio bar, the more data-intensive the process becomes. For so-called “high-resolution” recording, which is typically defined as 24-bit with sampling rates of 88.2kHz and higher, computers and audio interfaces must to be able to exchange lots of data very quickly in order to support multitrack recording and playback.

How fast the data transfer can move back and forth depends on the type of connection between the computer and the interface. Connection formats include various incarnations of USB, FireWire™, and Thunderbolt, including Thunderbolt 2, which we’ll focus on here.

First, a little background. In digital audio, when you record a signal from a mic or instrument, it goes through your interface’s preamp, and then into an analog-to-digital converter (ADC for short), where it is turned into digital data (a mathematical representation of the audio) before being sent to the DAW (Digital Audio Workstation) or other recording software in your computer.

The ADC “samples” the analog audio a specified number of times per second before converting it to digital data. The speed with which it does this is called the sampling rate. A good analogy would be movie frames. The more frames per second, the more accurately the film will capture the live action. If you have too few frames per second, you’ll get jerky playback, closer to a flipbook than a movie.

The bit resolution specifies how many bits (think of these as the digital “letters” that comprise a digital “word”) are used. The more bits used (i.e., the longer the “word”), the more detail can be captured for each sample. The combination of a high sample rate and high bit resolution gives you the most accurate and nuanced recording quality.

When digital audio is played back, it goes through a digital-to-analog converter (DAC), which does the reverse of an ADC; it takes those numbers and converts them back to analog audio (in the form of an electrical signal), which can be sent to your speakers or headphones.

There’s one last term you need to know: throughput, which specifies the maximum possible speed and bandwidth of data transfer. This bit rate (sometimes just shortened to bitrate) is typically expressed as megabits-per-second (Mbps) or gigabits-per-second (Gbps). The faster the data transfer, the more simultaneous tracks you can record or play back at a given sample rate and bit resolution, and the lower the latency (the delay between when audio is input and when it is heard after being processed by the computer — something that can be distracting during recording if it’s too long).

Audio interfaces equipped with Thunderbolt 2 connectivity (such as the new Steinberg™ AXR4T) offer significantly better throughput than previous formats. That in turn allows for large sessions to be recorded at the highest resolution available today: 32-bit / 384kHz.

To give you context for the speed of Thunderbolt 2, let’s compare it with other hardware connectivity formats that are widely in use. USB2 is the one most commonly found on audio interfaces, and it offers a relatively slow throughput of 480 Mbps. It’s sufficient for most home recording, which typically involves 24-bit / 44.1kHz or 24-bit / 48kHz audio, although its latency numbers are not that good. USB3 is significantly faster but still lags behind both the original Thunderbolt and Thunderbolt 2.

FireWire 800 is a connectivity format that’s still found on a lot of older computers, although it’s no longer included on new Mac® models. When FireWire 800 came out (supplanting the first version, FireWire 400), it was considered quite fast, with transfer speeds up to 800 Mbps. But in 2011, Intel® introduced Thunderbolt, a new format that offered a substantially faster 10 Gbps transfer rate, which was quickly adopted by Apple®, dooming FireWire to obsolescence.

In time, even the 10 Gbps of Thunderbolt became too slow, primarily because of how much data was needed for the new 4K video standard, so Thunderbolt 2 was developed, which, instead of offering two 10 Gbps channels like the original, provides a single channel with an impressive throughput of 20 Gbps.

Thunderbolt, no matter which version, gives you another significant advantage over USB: You can daisy-chain (serially connect) up to six Thunderbolt devices per port. So, if you are using a Thunderbolt-equipped interface like an AXR4T, you can also connect hard drives and other Thunderbolt 2 peripherals using only a single port on your computer.

The Speed of Audio

The Steinberg AXR4T offers a total of 28 inputs and 24 outputs when you include its digital expansion ports for ADAT, S/PDIF and AES/EBU audio. It provides four specially designed hybrid mic preamps that all offer switchable SILK circuitry from Rupert Neve Designs. SILK emulates the warm transformer-saturation of vintage Neve mic preamps and can be dialed into the circuit either completely or partially, giving you control over how much saturation you include on your recordings. (For more information, see our blog article “The Rupert Neve Connection.”)

The AXR4T’s built-in digital signal processing (DSP) is controlled by Steinberg’s included dspMixFx software, which adds a powerful virtual mixer along with no-latency monitoring and a suite of Yamaha effects including the Sweet Spot Morphing Channel Strip, REV-X reverb and the Vintage Classics VCM Compressor 276 and VCM EQ601. 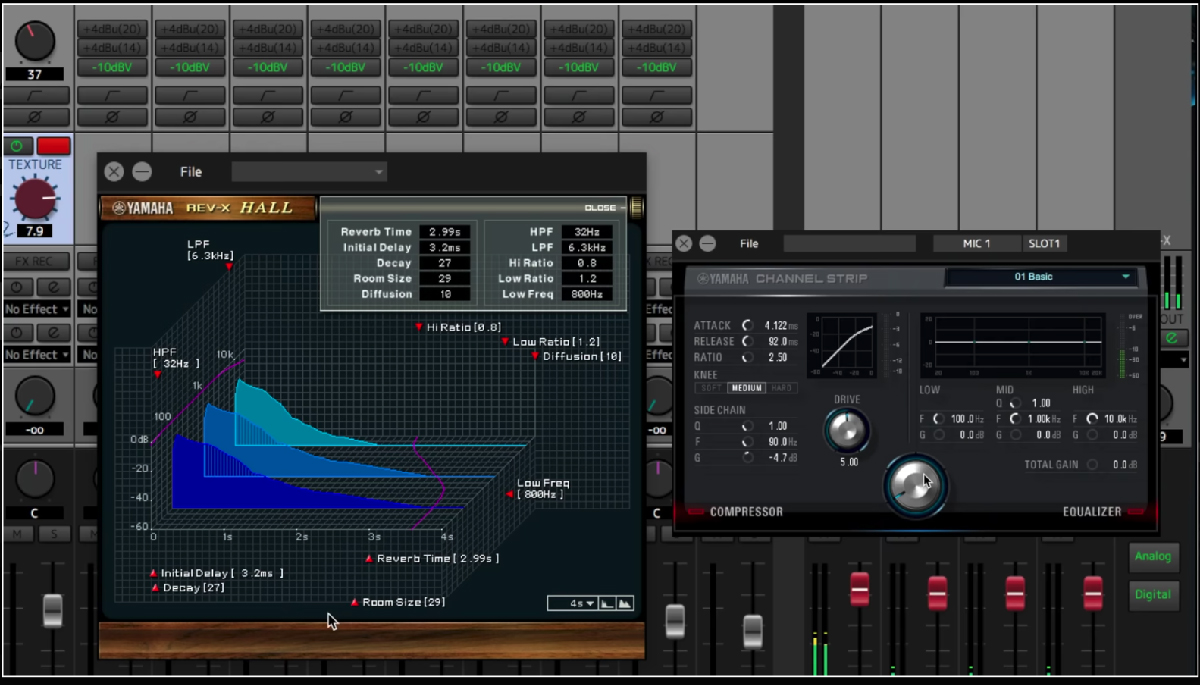 And, of course, the AXR4T offers Thunderbolt 2 connectivity, with all the sonic advantages that come with it, not least of which is the ability to record at sampling rates up to 384kHz — double the 192kHz rate that until recently was considered the upper end of “high-resolution.”

What’s more, you can set the bit rate to 32-bit integer, which allows for more detail and clarity than 24-bit, because each sample has 8 additional steps of resolution. It’s even better than 32-bit floating point, which you may have heard of. The latter gives you extra headroom for internal processing, but your audio still ends up as a 24-bit file.

The ultra-high quality offered by the AXR4T allows you to create recordings that represent a major raising of the bar for high-resolution audio. Thanks to the blazing speed of Thunderbolt 2, this new standard is now a reality.

Click here for more information about the Steinberg AXR4T.