In Part 1 of this two-part article, we shared some tips for practicing basic scales. Here, we’ll explore advanced scales and arpeggiated chords, as well as providing some exercises for your weakest fingers.

Let’s face it: Whether you’re a beginner or a professional keyboardist, the major scale is boring. To hold your interest, I suggest you instead practice more colorful scales — the ones that will form the most important part of your musical vocabulary during performance. These include the various modes of the major and minor scale, as well as more exotic ones. Here are some good scale/mode choices you should consider practicing, along with an audio clip that lets you hear what they sound like:

These modes become even more applicable to your playing if you think of a key center, or chord quality that you would likely play them against. In general, I find that any scale run that starts from the root note of the chord will sound uninteresting — it’s much more colorful to play lines that begin on any other note. For example, starting a C scale on the third note (the E) is called Phrygian Mode, and all too often students are taught to think of it simply as an exotic color for an E minor chord. But play it against a C major seventh chord and it sounds very “inside” and much more interesting. As a bonus, since it’s based on the C major scale, you can use the same fingering (i.e., 1, 2, 3, 1, 2, 3, 4 and so on).

Or try the C scale starting on the G (called the Mixolydian Mode) — again, a much nicer run to play against a C chord than the more pedestrian C major scale.

Take this approach, and you’ll be thinking about more colorful harmony and note choices when you practice your scales. For example, try recording some sustained chords and then practice various scales/modes against them — a great way to train your ears to hear the results of those choices. Technique and advanced harmony at the same time: Win/Win!

The same concepts can be applied to arpeggiating chords. Just as major scales can be yawn-inducing, simple triad arpeggios starting on the root tone of a chord are not the most interesting “vocabulary” to use in your playing. Instead, try using inversions; you’ll find that applying a different triad against any given chord will make your lines more colorful. Here are a few examples:

Arpeggiated sixth chords and seventh chords make for even more interesting runs that you can use in your playing. While obviously more difficult, they are also more rewarding. When doing these exercises, I like to think of each hand differently. For example, arpeggios starting on non-root tones played with the right hand can sound great. Here are some ideas to get you started:

I also like to apply the concept of arpeggiating a different chord quality against a key center using sixth and seventh chords, like these examples:

As for the left hand, try playing arpeggiated chords starting on the root note as a support for right hand melodies and chordal movement. As you progress, try skipping some notes towards the bottom, and perhaps fill in some more as you go higher. Here are a few ideas: 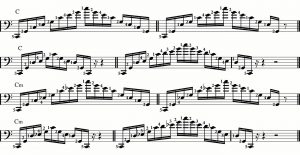 In any practice session, it’s important that you set aside time to strengthen and attain fluidity with your weakest fingers (which will almost certainly be the ring finger and pinky). My advice is to play exercises geared towards working those fingers, as opposed to playing long technical études that happen to include some attention to them. Here are a few such exercises I’ve devised that focus directly on those weaker fingers of both hands, inspired by my early Hanon studies and other books. Be sure to play them slowly at first, concentrating on the evenness of all the notes:

All audio clips are played on a Yamaha P-515.