Imagine for a moment that you’re an astronaut. You wouldn’t go up into space without having complete confidence in mission control, right? Well, the same is true for those who wish to explore the ever-expanding universe of audiovisual entertainment — only in this case the part of mission control is played by an AV receiver. All the components in your home entertainment system have to go through a receiver before anything reaches your eyes and ears. And it doesn’t matter how great any of those components are if you can’t depend on your receiver to deliver what they’re putting out.

Finding the right AV receiver is easier said than done, whether you’re buying one for yourself or as a gift for someone. There’s certainly no shortage of choices on the market, and many of today’s receivers offer a boatload of bells and whistles. In this article, we’ll talk about five important features you should consider.

Sound quality is far and away the most important AV receiver criteria — but it’s also the most subjective. Some people want the sound of a receiver to be completely transparent, while others prefer receivers that lend the audio an extra touch of brightness or warmth. Many Yamaha AV receivers offer a feature called YPAOTM (Yamaha Parametric room Acoustic Optimizer), which analyzes the components you’ve got and the space you’re in, then calibrates the receiver’s audio output to those specs so that you always get the best possible listening experience in your particular listening environment. (To find out more about YPAO, click here.)

Every good AV system needs a powerful receiver, but figuring out the power rating of an audio component can be a challenge, with lots of numbers and strange terms getting in the way. The simple measurement of WPC (wattage per channel) is not necessarily going to help you very much, because it’s often determined in an old-fashioned way, by driving one channel with a simple test tone. This just isn’t realistic for a modern AV system, which uses at least two channels all the time (conceivably many more — see below) and is expected to cover an extremely wide frequency range with minimal amounts of THD (total harmonic distortion).

There’s a much better way to measure a receiver’s true power output, and that’s by seeing what happens when you drive two channels simultaneously with a wide range of tones — ideally everything between 20Hz and 20kHz (the range of human hearing). When measured by this standard, the Yamaha RX-V685, for instance, has an output power rating of 90 watts, with a THD of 0.06%. The 90 watts is far more than enough power for a standard-sized living room, and the extremely low THD value is a reflection of exceptionally clear sound quality.

Let’s make the fairly safe bet that you’re interested in surround sound for your home system. The question is, how many channels will you need?

5.1 is the most common surround format. It consists of five discrete audio channels (the “5”) and one extra low-frequency (bass) channel designed to be routed to a subwoofer (the “.1”). 7.1 adds two more channels to the mix.

Once you move beyond 7.1 — to 9.1 or 11.1 — the additional channels are no longer discrete. Instead, they’re matrix-encoded, meaning that they are blended in with the real channels. It’s the job of your receiver’s processor to pick them out of the matrix and assign them to various speakers in the correct proportions, which makes your choice of receiver even more important.

Systems that are classified as “.2” rather than “.1” (5.2, 7.2, and so on) are designed to be used with two subwoofers instead of one, which gives a deeper sense of sub-bass and also enables the burden of the low end to be shared so that it doesn’t all depend on a single speaker. All Yamaha AV receivers allow for the use of at least one or two subwoofers.

The next step is multidimensional sound, in which there are height channels, which may come from in-ceiling or upward-firing speakers. Examples of multidimensional speaker configurations include 5.2.4, 7.2.2 or 7.2.4, where the last digit represents the number of height channels. Because there is essentially no limit to the amount of channels, this type of audio has to be matrix-encoded since dozens of discrete channels would require you to have dozens of speakers — an impracticality for most people. Dolby’s version is called Dolby Atmos®, while the format offered by DTS is called DTS:X™. All Yamaha AVENTAGE receivers and some Yamaha RX-V and TSR models have both Dolby Atmos and DTS:X capability.

Of course, a receiver has to be able to accommodate every other part of your system. Be sure to check the exact number and type of inputs and outputs needed for each of your separate components, and match them up with what the receiver is offering. Err on the side of too much rather than too little; after all, you may well want to add more components later.

As an example, the Yamaha RX-A3080 AV receiver provides a wealth of interconnections. In the back, there are seven HDMI inputs, three HDMI outputs, one network port, three optical digital audio inputs, three coaxial digital audio inputs, ten analog stereo inputs, four composite video inputs and connections for an AM/FM antenna, plus outputs for up to eleven speakers and two subwoofers. In front, there’s a 1/4″ stereo headphone jack, a USB port, a 1/8″ analog mini-jack, and an input for the supplied YPAO microphone used to automatically calibrate the output of your speakers based upon the acoustic characteristics of your room. 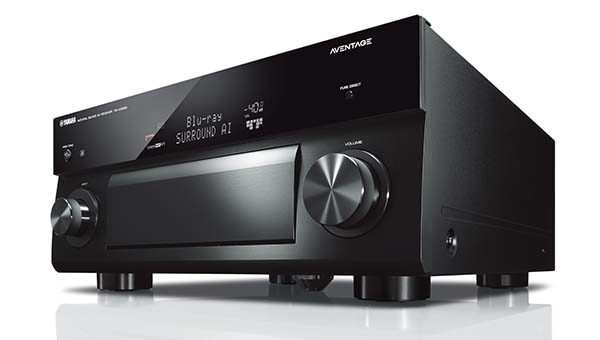 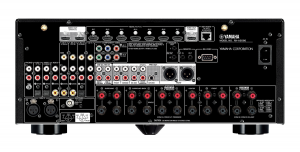 Not that long ago, you couldn’t put an AV system together without a bucketful of wires. That time has passed, and now a major test of a receiver is its ability to work with a variety of wireless devices. Some receivers, like Yamaha AV models equipped with MusicCast Surround, even allow you to use wireless surround speakers like the MusicCast 20 and MusicCast 50 to easily create a home theater with surround sound without having to run wires around your room. Connectivity via Wi-Fi®, Bluetooth® or AirPlay® 2 enables access to streaming services, as well as the music stored on your smart devices and computers; it also allows remote control from a smartphone or tablet.

MusicCast technology also allows you to add wireless speakers, sound bars or other devices in up to 31 other rooms at full fidelity, giving you the ability to listen to your favorite music throughout your entire home, all under the control of a simple app — and without the need for cabling.

If you’ve narrowed it down to two or three choices and are still looking for that feature that will distinguish one receiver from the rest, consider whether or not it offers artificial intelligence capabilities like Surround:AI™, the amazing breakthrough technology found in top-of-the-line Yamaha AVENTAGE AV receivers.

In a nutshell, Surround:AI instantaneously analyzes and optimizes the audio parameters for each scene of a movie in real time, creating the best possible overall sound effect for your home theater at every moment.

To find out more about Yamaha AV receivers, click here.

How to Stream Music from Your Computer
The Power of Music: Zen and the Art of Making Music