The Fourth of July is all about fireworks, picnics and patriotism. Let’s take a look at the history of the five patriotic songs most closely associated with this proud holiday tradition.

1. The Star-Spangled Banner. Written in 1814 and inspired by the bombardment of Fort McHenry in Baltimore during the War of 1812 — a battle ultimately won by the U.S. —this was not actually made our national anthem until 1931. Lawyer and amateur poet Francis Scott Key — an eyewitness to the event — wrote the lyrics, which were later set to the tune of a popular British song written by John Stafford Smith. Interestingly, Key’s original poem had four stanzas, though only the first is commonly performed. With a range of 19 semitones, the song is notorious for being very difficult to sing, as many attendees to sporting events can testify. 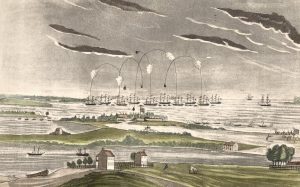 The bombardment of Fort McHenry. 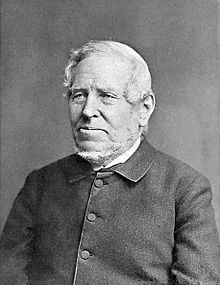 2. My Country ’Tis of Thee. The lyrics to this song were written by Samuel Francis Smith in 1831, when he was just 23 years old. The source of the melody, however, may surprise you: It’s the same as that of the national anthem of the United Kingdom, “God Save the Queen.” 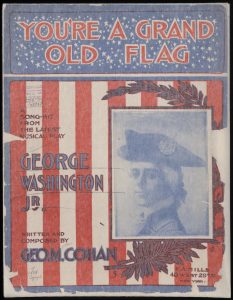 3. You’re A Grand Old Flag. This spirited march was composed by vaudeville song-and-dance man George M. Cohan in 1906 for his stage musical George Washington, Jr. It was made famous by James Cagney, who portrayed Cohan in the 1942 movie Yankee Doodle Dandy — a song also penned by George M. 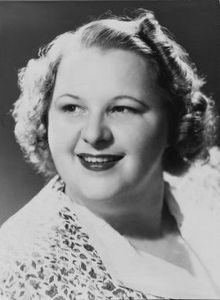 4. God Bless America. Composed by famed songwriter Irving Berlin in 1918, his 1938 revision was made famous by singer Kate Smith during World War II and in the post-war years. Interesting factoid: It was the official campaign song for President Franklin Delano Roosevelt in 1940, as well as his Republican opponent, Wendell Willkie. 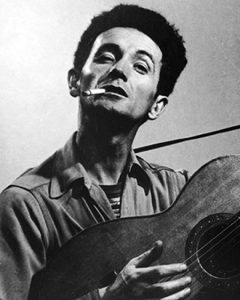 5. This Land Is Your Land. Interestingly, this was written in direct protest to “God Bless America,” when Woody Guthrie decided in 1940 that he was sick of hearing Kate Smith sing it endlessly on her radio program. Guthrie penned the lyrics, which he then set to the melody of a Carter Family tune called “When the World’s on Fire.” The song became an anthem for many of the folk artists of the 1960s, and was covered by Bob Dylan, The Kingston Trio, The New Christy Minstrels, Pete Seeger, and Peter, Paul and Mary, among many others.

Back to Bassics: A Guide to Bass Pickups
Advanced Instrument Design and Maintenance: Swabbing Brass Instruments