A piano is a piano, right?

Not exactly. In fact, there are several kinds of pianos. For one thing, there are digital pianos, and there are acoustic ones. Digital pianos create their sounds electronically, and require power as well as speakers or headphones in order to be heard. Most digital pianos, in fact, play back samples — that is, digital recordings — of acoustic pianos. Acoustic pianos, on the other hand, create their sounds in air, by means of strings being struck by hammers and a wooden soundboard that serves to amplify the sound so that it can be easily heard, without the benefit of any electronic components, and therefore without the need for electricity, speakers or headphones.

As you might guess, the acoustic piano came first — in fact, nearly 300 years before the digital variety. The first pianos were large and therefore called “grand” pianos. But there’s a second, smaller variety of acoustic piano too: the upright, invented some 80 years after the grand. It has a lot in common with its forebear, but there are some significant differences too. In this article, we’ll take a look at both the similarities and differences.

As mentioned, grand pianos are the largest type, and frequently the most expensive as well. They offer a wide dynamic range, rich resonance, diverse tonality and responsive touch and for those reasons are generally the choice of professional musicians, particularly those playing classical music or jazz. 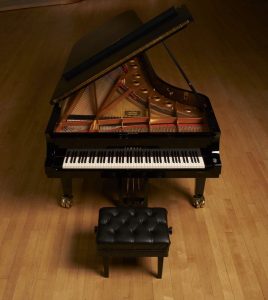 Yamaha CFX grand piano. The holes to the right are part of the metal frame; to their left (beneath the strings) is the wooden soundboard.

Grand pianos vary in size, from “Baby grand” models that can be as little as 5′ in length, all the way up to “Concert grand” models, which can be 9′ or more. One thing they all have in common are massive frames made of cast metal and horizontally mounted soundboards made of thin wood. Dampers lie on top of the strings, adjacent to the hammers, which are also horizontal, and the lid can be raised up to further project the sound. All grand pianos provide 88 ivory, wood or ivory-covered wood keys, and include a retractable cover that contains a sheet music stand and slides over, or folds down on the keys.

Yamaha offers a wide variety of grand piano models, from the GB1K and GC Series baby grands to the flagship CF Series concert grands, all providing a perfect blend of craftsmanship and innovation.

The term “upright piano” is somewhat confusing. It is sometimes used synonymously with “vertical,” although technically speaking, an upright is a type of vertical piano. Uprights take up much less space and tend to be less expensive than grand pianos. They are a favorite of music students and a staple of schools and conservatories all over the world, and their compact design allows them to be conveniently placed next to a wall or in a corner, making them a popular addition to many living rooms as well.

Like the grand, upright pianos vary in terms of size, materials and construction, but they all have wooden soundboards that are mounted vertically, with strings that stretch downward and are struck (and muted) by horizontal hammers and dampers. Upright sizes range from small “Spinet” models (popular up until the mid-twentieth century but rarely made today) of as little as 3′ in width, through “Console” and “Studio” models that vary in height but are generally 5′ wide. They may be smaller than their grand cousins, but all upright pianos offer the same 88 keys, usually made of wood or ivory-covered wood.

Yamaha makes a variety of upright pianos, from the compact, entry-level b series to the U Series — the world’s most popular upright — to the YUS Series, which shares many of the features of CF Series pianos for a broad range of sonic tonalities more reminiscent of a grand piano than a traditional upright. 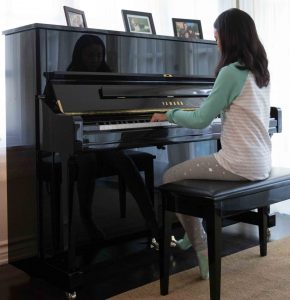 As we have seen, two major differences are their size and the mounting of the soundboard and strings (horizontal in grands and vertical in uprights). But these factors have additional implications. For one thing, the larger size of grand pianos means that they have longer strings and larger soundboards, which impart a different tonality than do uprights. This also results in grand pianos having a greater dynamic range (that is, the difference between the softest sounds and the loudest sounds it can produce) than uprights. In addition, grand pianos emit sound from above, while upright pianos emit sound from the back end, which is usually placed against a wall. For those reasons, grand pianos can be much louder than uprights.

Another significant difference between the two is their “action” — the mechanism that causes hammers to strike the strings when a key is pressed — which is why they often feel so different to play. Because the strings are mounted horizontally in grand pianos, the hammers return to their rest position due to the force of gravity, under their own weight. In addition, grand pianos utilize a double escapement mechanism that allows keys to be played rapidly in succession, without first letting the key return all the way to its starting position. In upright pianos, where the strings are mounted vertically, the hammers rely on springs to return to the at-rest position. As a result, key repetition (i.e., when a player repeats notes quickly, such as when playing trills) is much smoother and faster in grand pianos than it is in upright pianos — to a maximum of roughly 15 times per second in grands, versus seven times per second in uprights.

Finally, while both grand pianos and upright pianos offer three foot pedals, they have slightly different functions. In a grand piano, the pedals are: 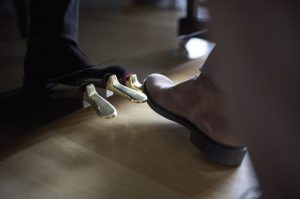 – Shift pedal (left pedal): Also called the soft pedal or una corda pedal. When depressed, this shifts the entire action assembly to the right, changing not only the volume of the sound, but also making slight changes to the tone.
– Sostenuto pedal (middle pedal): This keeps the dampers raised and away from the strings of any keys played just before depressing the pedal, making it possible to sustain selected notes.
– Sustain pedal (right pedal): Also called the damper pedal. When depressed, the dampers remain lifted even if the fingers are taken off the keys, thus sustaining all played notes.

In an upright piano, the pedals are:

– Soft pedal (left pedal): When pressed, all the hammers are moved closer to the strings, reducing the volume of the sound.
– Muffler pedal (middle pedal): Also called the practice pedal. When pressed, a thin piece of felt is dropped between the hammers and strings, greatly muting the sound.
– Sustain pedal (right pedal): Functions the same way as in a grand piano—when depressed, the dampers remain lifted even if the fingers are taken off the keys, thus sustaining all played notes.

This posting is excerpted from the Yamaha Musical Instrument Guide. For more information about Yamaha pianos, click here.

So Your Child Wants to Learn to Play Drums – Part I
Atmosfeel™: The Next Generation of Yamaha Acoustic Guitar Pickups