For more than three decades, Yamaha timpani have been widely used by ensembles of all shapes and sizes in venues from concert halls to football fields.

While various options have changed over time, a number of player-oriented features introduced by Yamaha have remained constant, making these instruments not only accurate and easy to tune but also exceptionally portable and durable. These features include suspended parabolic bowls and extended collars, as well as the usage of Teflon taping to the edges of the kettles so that the heads move quietly over the bearing edges. Yamaha timpani also utilize a unique balanced spring design so the set pitch is maintained even if the player removes his or her foot from the pedal, making pitch changes across the entire range smooth and easy. In addition, all the mechanisms (plus the spider) are located under the base for added protection, with the spring tension adjustment screw placed under the pedal to eliminate unintentional adjustments.

But our timpani have evolved as well. Here are some of the innovations added over the years as different lines have been introduced:

600 Series. Though there were only four sizes (23″, 26″, 29″, 32″), these timpani featured full suspended, deep-drawn copper parabolic bowls, polished on the inside for maximum projection, excellent tonal characteristics and wide tuning range.

4000 Series. This series consisted of four sizes (23″, 26″, 29″, 32″), with Fiberglass Reinforced Plastic (FRP) bowls. Many of the same features from the 600 Series, such as the removable third wheel and spider mechanism concealed under the base, were also included.

6100 Symphonic Series. These copper timpani were nearly identical to 6000 and 600 Series models. Upgrades were made to the removable third wheel, and a matte black tuning gauge with a red arrow indicator was included.

4100 Concert Series. Nearly identical to the 4000 Series models, these fiberglass timpani provided a good alternative when portability and budget were of concern. As with the 6100 Series, upgrades were made to the removable third wheel, and a matte black tuning gauge with a red arrow indicator was included. 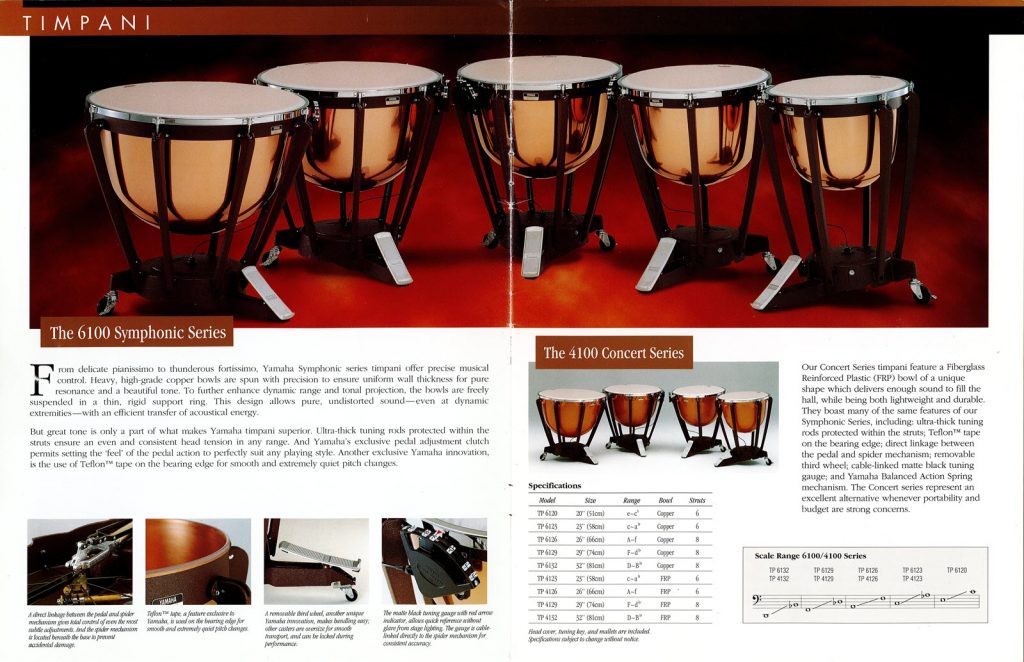 7100 Professional Series. These timpani included all the features in the 6100 Series, but with hand-hammered copper bowls and chrome hoops.

During 2002, the entire lineup was redesigned, with the addition of a matte black base, a black pedal and a black hoop for a refined and consistent look across all Yamaha timpani.

7200 Series. Identical to the 6200 Series except these timpani featured hand-hammered bowls and had options for 24″ and 27″ sizes.

3100 Series. These were the first portable Yamaha timpani to not use FRP bowls. Instead, they offered aluminum bowls for enhanced sound and portability. In addition, these timpani had wider pedal with a smoother action. 3100 Series timpani could also be changed from a standard set-up to a German set-up (where the drums are arranged from high to low, left to right). Included were head protectors, tuning keys, a pedal adjustment wrench and a special wrench to reposition the tuning indicator.

7300/6300/4300 Series. These represented a thorough redesign of the bowl and frame. All timpani in this Series featured the same frame, pedal and tuning indicator. Casters were updated to be larger and could be locked both side-to-side and front-to-back. In addition, each timpano could be tilted by adjusting the level of each caster.

– A totally redesigned base

– An auxiliary brake added to the pedal caster for greater safety and security. If the performer neglects to engage the main caster brakes, this auxiliary brake can be engaged to prevent movement.

– Easier main caster height adjustment with the use of a tuning key. This can be done by a single person without having to lift the caster off the floor.

– A revised wrench key holder. In previous models, the key/wrench holder was attached with adhesive tape, making it necessary to use new tape when changing the holder location. The new holder attaches with a bolt, allowing it to be changed easily and repeatedly as needed.

– An improved tuning indicator. The width of the accidental note name markers was increased by 1.5 mm to make positioning easier, and to make them less likely to drop inside the indicator. At the same time, the width of the natural note name markers was reduced by 1.0 mm to maintain comfortable marker spacing. An “H” marker is now supplied as a standard accessory, allowing the player to choose “B” or “H” according to preference.

8300R Series. These top-of-the-line timpani include most of the features of the 7300 Series, with two exceptions: The use of cambered hammered copper bowls (for extra volume as well as optimum resonance and decay) and extra flexibility when adjusting the pedal balance spring system by using a knob located on top of the spider. (The latter is also a feature of 7300R Series timpani.) In addition, the 8300R Series offers optional 24″ and 27″ sizes for expanded musical potential. 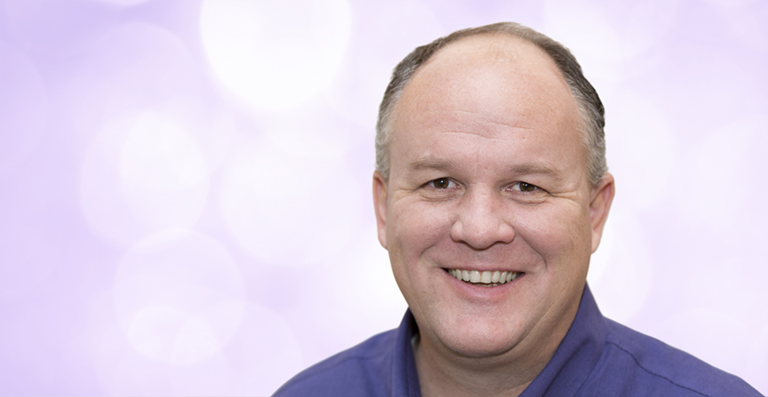 Troy Wollwage was the Department Manager for Yamaha percussion in the U.S. He has an MBA from Boston University and a BS in Business Administration from the University of Southern California. He is an alumnus of the world-famous USC Trojan Marching Band and appeared in the movie “Naked Gun,” as well as numerous TV shows.