One of the great things about playing electronic drums is that you can change sounds more easily than you can on acoustic drums. Unlike an acoustic drum set (where you’d need to retune the drums, change the heads and/or adjust muffling, etc.), the sound of an electronic kit can be altered with the push of some buttons.

The Kit Modifier section of the Yamaha DTX-PRO module (furnished with all DTX6 Series electronic drum kits) makes this sonic transformation easier and faster than ever before — all you have to do is turn just three knobs to dial in the sound you want! In this article, we’ll take a deep dive into how this unique feature works. 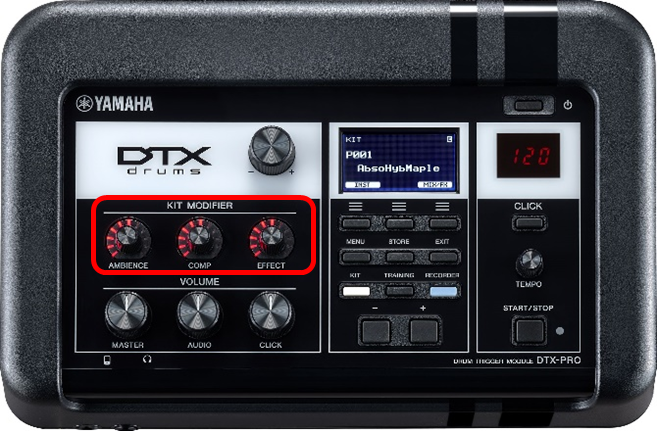 DTX-PRO with the Kit Modifier highlighted.

The Kit Modifier enables you to personalize the sound of the 40 preset kits, and also provides a way for you to build new kits that inspire creativity. (Up to 200 user kits can be stored in memory.) It’s comprised of three controls: Ambience, Comp (compression) and Effect, all prominently featured on the front panel of the DTX-PRO, so you always have fast access to them. There are also LED rings around each knob, giving you instant visual feedback. The three controls can be used individually or in combination with one another, and their settings are stored along with the drum kit you’re modifying or creating.

Let’s start with the Ambience control on the far left. There are two options available, called “Ambi” and “RealAmbi.” We’ll talk about both in detail shortly, but whichever you choose, the Ambience knob sets the overall depth (that is, amount) of the ambience, which can be added to an entire kit or to each Inst (instrument) in the kit independently — for example, if you want to apply it to the snare but not the kick drum.

For most DTX-PRO preset kits, turning up the Ambience Kit Modifier knob adds only the RealAmbi effect (in increasing amounts) until the knob reaches the 12 o’clock position; as you turn the knob past 12 o’clock, the Ambi effect takes over to produce longer reverb times and larger spaces. There’s even an edit menu parameter called Curve, which allows you to create custom transitions between RealAmbi and Ambi as you turn the knob, but the bottom line is this: lower settings give you more room sound, while higher settings give you more radical reverbs and special effects. You’ll quickly find the setting that works best for you as you cycle through different kits.

The DTX-PRO module offers more than 700 new drum, cymbal and percussion sounds, all recorded by experienced engineers in some of the world’s finest recording studios. For many of these samples, the actual room acoustics were also recorded (in stereo) at the same time. These RealAmbi room acoustics are added to the direct sound of the samples for a high level of realism and a natural playing experience. Many DTX-PRO drum sounds were recorded with real room ambience.

Here are some audio clips that let you hear how RealAmbi room acoustics add to the sound of two different DTX-PRO drum kits. First, here’s preset kit P001 (“AbsoHybMaple”) with the Ambience Kit Modifier turned all the way down:

Compare that to the sound of the same kit with the RealAmbi room acoustics added:

Preset kit P020 (“Engraved”) also incorporates RealAmbi room acoustics. Here’s how it sounds with the Ambience Kit Modifier turned all the way down:

And here’s how it sounds with RealAmbi:

Ambi offers a variety of reverbs such as Hall, Room, Plate, Stage and Space Simulator. Since they are generated using DSP (Digital Signal Processing), it’s possible to create bigger spaces than those provided by RealAmbi.

To hear how this sounds, let’s start by listening to preset kit P005 (“SwedishMetal”) with no Ambience Kit Modifier:

Here’s how it sounds with the Room 1 Ambi effect added:

And here’s the same kit with Hall1 Ambi:

DSP also makes it possible for Ambi to generate combinations such as Reverb+Gate, Reverb+Chorus, Reverb+Phaser, Reverb+Flanger, Reverb+Harmonic and Reverb+Ringmod. These all permit editing of reverb time, as well as low and high EQ, plus modulation where applicable.

When Reverb+Gate is added using the Ambience Kit Modifier, it sounds like this:

Pretty extreme, I know … but you get the point.

And Reverb+RingMod can be used to create a clangy, metallic effect that sounds like this:

Compression is something that’s used (sometimes overused!) on just about every modern recording, and it’s often applied to drums. It smooths out the overall volume level by making loud sounds softer, so that no instrument “sticks out” as being noticeably louder than the others. Once the louder sounds have been made softer, the overall volume level is usually decreased, so most compressors add “make-up gain” to restore the lost level. That’s how the DTX-PRO Compression Kit Modifier (the knob in the center) can make drums sound louder.

In the following audio clip, you’ll hear preset kit P013 (“ModrnCountry”) with the Compression Kit Modifier turned down all the way (no compression):

Here’s how that same kit sounds with the Compression Kit Modifier at 12 o’clock:

Compare that to the sound of the next clip, where the Compression Kit Modifier has been turned all the way up:

When drums are compressed, they sit in a mix at a more consistent level. The Compression Kit Modifier also emphasizes the attack of each drum, helping them punch through a busy mix. It can also bring out the resonance in toms, making them sound fuller and rounder.

Short for Master FX, these effects are applied to the entire drum kit. There are more than 20 different types of MFX, including Analog Delays, Flangers, Phasers, Lo-Fi, Dynamic RingMod, Presence and Harmonic Enhancer. Some of the DTX-PRO preset drum kits already have an MFX enabled, but you can easily add or change the type of effect. The Master FX Type and Depth can be changed from the MFX edit screen.

The Effect Kit Modifier knob generally controls the depth of the MFX, but for some types of effects, it instead changes a different parameter. For example, if you set the MFX to “Analog Delay 2,” the knob changes the delay time; for some of the modulation effects such as “2 Modulator” and “SPX Chorus,” the knob changes the modulation speed. An MFX effect can be bypassed by setting its Type to “Thru.”

Unlike MFX, these effects can be applied to individual instruments with the use of the DTX-PRO internal mixer. For example, let’s say you set FX1 to “Tempo Delay 8th” and FX2 to “Classic Flanger.” You can then send the toms to FX1 and the cymbals to FX2. The Effect Kit Modifier knob will control the overall amount of both, plus the MFX, if there is one. In this case, the DTX-PRO Tempo knob will control the delay time for “Tempo Delay 8th,” giving you fast access to both depth and timing. The DTX-PRO mixer allows you to send individual instruments to each effect.

Let’s listen to how effects are used in some DTX-PRO preset kits. Here’s the sound of preset kit P015 (“OldenDays”) with the Effect Kit Modifier knob turned all the way down (fully counterclockwise):

Notice that there’s no delay. Compare that to this next audio clip, where the Effect Kit Modifier knob has been turned up so you can hear the delay:

As the Effect Kit Modifier is turned up, the intensity of the delay increases.

But when you turn up the Effect Kit Modifier, it’s transformed into a spacey, synth-like drum kit:

However, if you decrease the Effect Kit Modifier by turning it counterclockwise, the filter opens, making the kit sound more hi-fi:

A World of Possibilities

Don’t forget that you can use any or all of the DTX-PRO Kit Modifier controls in any combination. Together or separately, they open up a world of possibilities for you to create distinctive-sounding drum kits on the fly.

Ready to learn more about the DTX6 Kit Modifiers? Check out this video: