The simple answer is: There’s no need to limit yourself to just one. Thanks to digital modeling technology, guitarists and bassists can access a wide range of virtual instruments, amps and speaker cabinets, both in the studio and onstage.

Digital modeling has come a long way since its introduction in the 1990s, thanks in large part to massive increases in computer power and processor speed. In this article, we’ll focus on two modern products — Yamaha THR-II Series desktop amplifiers and SILENT Guitars™. But before we do so, let’s talk about how modeling works.

Digital modeling in general works by replicating (i.e., emulating) an object with the use of computer algorithms — sets of software instructions created to perform a particular task. In a model of an electronic device like an amplifier, these algorithms are designed to recreate the behavior and interactions of each individual circuit and component within the amp. What’s more, guitar amp modeling plug-ins such as Line 6 Amp Farm® usually offer a user interface that provides emulations of the original amp’s knobs and switches, making the simulation even more realistic. 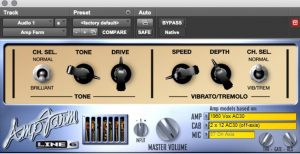 Part of the challenge in creating amp models is replicating the sometimes irregular behavior of components like tubes and transformers, which create the warmth and distortion that makes these devices so popular. Some amp modeling products also incorporate algorithms that emulate the sonic responses of various speaker cabinets.

One of the big advantages of amp modeling versus using a real amp is that you can monitor over headphones without making any noise. If you have an apartment-based home studio, for example, it allows you to practice and/or record guitar parts 24/7 without bothering your neighbors.

Musical instruments can also be modeled. Electronic instruments such as synthesizers are modeled by digitally replicating their circuitry through a process similar to modeling amplifiers. But the process of modeling an acoustic instrument, such as guitar, is significantly different.

One approach is to recreate the tonality and behavior of the instrument by sampling every note it’s capable of producing at a variety of different volume levels, and, if necessary, applying all the different possible articulations as well. A more complex method called physical modeling requires mapping out the physics of the way the instrument produces sound and then creating algorithms that replicate each process.

Yamaha THR-II Series desktop amps are small, highly portable practice amps that offer 15 guitar amp models, along with acoustic guitar and bass models, plus onboard digital effects. They can also act as a USB audio interface, so you can digitally record guitar parts into your DAW, with the amp, instrument and effects modeling applied. If you already have an audio interface, you can simply plug one or both of the THR-II 1/4″ line outputs into the interface’s line inputs.

Here are a few audio clips, recorded with an electric guitar being played through a THR30II. The first example uses the amp’s Clean Boutique model on the rhythm part, with a little added onboard reverb:

This next clip features some lead guitar through the Lead Boutique model, again with a little added reverb:

And this one employs the Modern High Gain model for a heavily distorted sound:

There are several different types of Yamaha SILENT Guitars, but what they all have in common is that they make virtually no noise acoustically, are easily portable and offer a wide range of tones. The SLG200S, which has steel strings, works well in tandem with THR-II amps. SILENT Guitars offer two different types of sound production, and you can opt to either switch between them or blend them together. One is with the use of a piezo-electric pickup, which is a standard way to electrify an acoustic stringed instrument. The other is called Yamaha SRT (Studio Response Technology) — a unique system that digitally models the sound of an acoustic guitar being captured through high-quality studio microphones. This extremely realistic emulation not only replicates the characteristics of the microphone, but the physical resonance of a guitar as well.

The SLG200S has particularly versatile sonics. If you plug the pickup signal into a clean amp, mixer or interface directly, it sounds like an acoustic guitar, particularly if you blend the SRT signal with it. But it can also sound like an electric guitar if you turn the blend all the way to the P.U. (pickup) setting and plug it into an amp, such as a THR-II model, that’s designed to create a variety of distorted and overdriven sounds.

The next three audio clips allow you to hear the sound of the SLG200S played through a THR30II amp. In this first example, the THR30II is on its Clean setting, so the SLG200S sounds like an electric-acoustic guitar:

In this next clip, the amp is set to Clean Classic, which makes the SLG200S sound like a clean electric guitar:

Finally, here’s a duet with the SLG200S playing both parts; the lead part uses the THR30II Lead Boutique setting, while the rhythm part uses the Lead Classic setting:

As you can see, whether it’s used to create virtual amps, speaker cabinets or even guitars, digital modeling can open up a huge range of tonal options that you couldn’t achieve without a warehouse full of gear. Well worth checking out!

Four Reasons I Travel With My Yamaha SILENT Guitar™