When I first heard about the new Yamaha THR30IIA, a desktop amp that’s designed specifically for acoustic guitarists, I knew I had to get my hands on one. It seemed like it might be the perfect pairing for my trusty Yamaha FG-TA TransAcoustic guitar.

It arrived. I was blown away. And since the cues I compose for television shows often contain acoustic guitar tracks, I decided the best way to put the THR30IIA through its paces was on a real-world recording session. In this article, I’ll share the results of that session so you can hear the cues for yourself, and I’ll give you my thoughts about the amp too. But first, the basics.

What Makes the THR30IIA So Special?

This latest addition to the THR-II family of desktop amps is unique in that it’s designed specifically to be used with the direct signal coming from the pickup in an acoustic guitar. It’s loaded with useful features such as a built-in tuner and Line 6 Relay wireless receiver, a rechargeable battery and Bluetooth® support that allows you to wirelessly stream audio from your computer, smartphone or tablet — great for play-along practice. There’s also a second input with independent volume and reverb; this input can also be used for a microphone thanks to its combo XLR / ¼” connector and built-in mic preamp.

With 30 watts of power, the THR30IIA delivers plenty of punch, and its specially designed speaker enclosure with dual 3.5″ speakers is optimized for both guitar and Hi-Fi audio playback. There’s even a Stereo Imager that offers Normal, Wide and Wider settings. 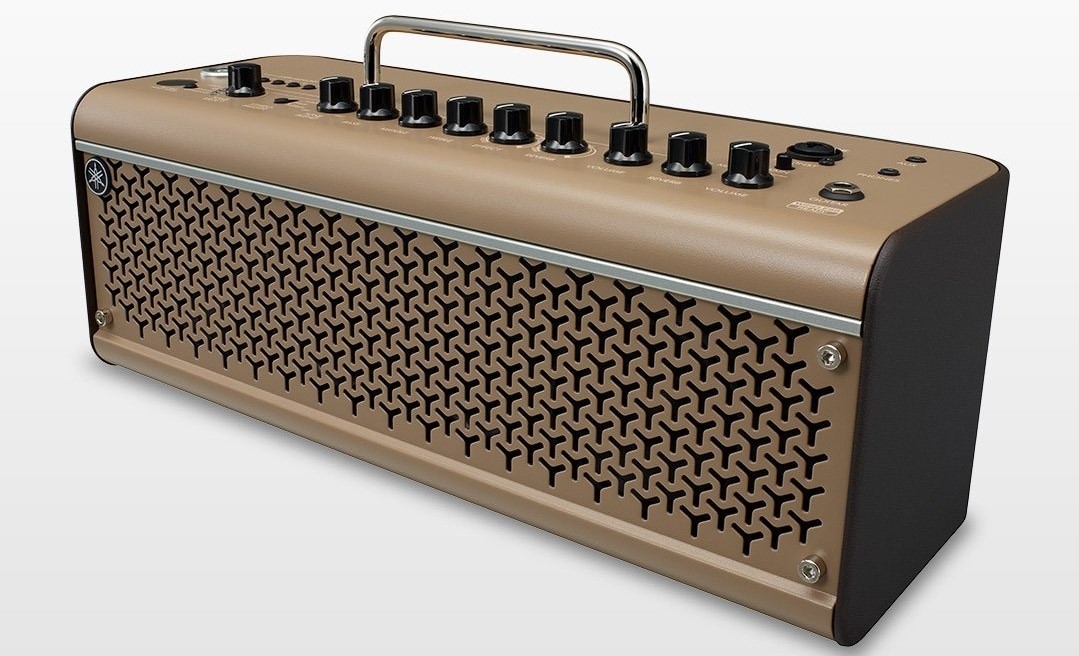 Three-way EQ ensures that you have lots of control over your sound, and a unique Tone Blend control lets you determine how much of the EQ’d signal is blended in. (How cool is that!) There are five different types of acoustic mic modeling (Condenser, Dynamic, Tube, Nylon and Flat), as well as onboard reverb, chorus and delay effects that can be expanded with the use of the free THR Remote app for iOS and Android™ devices. Five user memories allow you to store your favorite settings, and compatibility with the free Yamaha Rec’n’Share app means you can easily record audio and video along with songs from your music library and then share your performances with the world.

Stereo ¼” outputs on the rear of the amp make recording simple and straightforward; the THR30IIA can also act as a USB audio interface, and it even comes with Steinberg Cubase AI recording software. In short, there’s everything an acoustic guitarist could possibly need!

Putting the THR30IIA Through Its Paces

Of course, the first thing I did when receiving the THR30IIA was to plug my FG-TA into it. Being a TransAcoustic instrument, it has its own built-in effects, but I started keeping the effects off. I then turned the amp on, set Tone Select to Flat, the Tone Blend knob to Dry (so that there would be no EQ) and the Stereo Imager switch to Normal, with no effects on. Strumming a few chords, I was immediately struck by the directness of the sound, as well as its clarity and natural acoustic tone.

Leaving the FG-TA’s built-in effects off so I could focus on tweaking the THR30IIA controls alone, I quickly came up with a great sound by adding just a touch of bass and treble (around 1 o’clock), a dash of reverb and a taste of chorus/delay, with the stereo imager at its Wide setting. I noticed how similar this was sonically to something I was already used to, which was the sound of the effects coming out of my TA guitar … yet it was a lot louder and coming from a compact amp!

That’s all I needed as a base. Now I was ready to put this instrument/amp combo to the test.

When I write a cue, I begin with the end result in mind — in fact, I can usually hear the finished product in my head almost before it’s done. Since the sound coming from the amp was already so good, I decided to start by adding some extra Chorus/Delay, which gets deeper as you turn the THR30IIA Effect knob up. I then connected the amp’s left and right line outputs into my DAW via an audio interface. In my DAW, I panned the left channel hard left and the right channel just past 1 o’clock, knowing what was coming next. (When I record guitars, I layer them to make the sound bigger in the stereo field, which is also helpful for television.) The sound was exactly what I wanted — lush, thick and full of depth. Here’s the track I recorded with these settings:

For the next pass, I wanted to get a drier sound from the amp with no effects, to compensate for the “wetter” track I had just laid down. This was easily accomplished by setting the THR30IIA Tone Select knob to Dynamic. This yielded a nice natural tone with a bit of mid presence to it. But this time, I placed a good-quality condenser mic set to cardioid right in front of the amp, about 6 inches back and just to the left of center facing the left of the two speakers. Playing the same part as previously recorded, I panned the track hard right to begin filling out the stereo field. Here’s what it sounded like:

Now to fill things up even more, I set Tone Select to Tube on the THR30IIA, with the amp’s reverb set to Long, and once again captured the sound with a condenser mic. This sound was narrower and set back in the sonic field, but, panned to around 2 o’clock, worked perfectly with the previous pass. Here’s what it sounded like:

At this point, I had a full acoustic guitar mix happening:

Overall, the combination of recording direct from the amp with the line outputs and placing a mic in front of it worked out really well, as you can hear from the final mix, complete with backing track:

I was impressed with many things about the THR30IIA on this session. By just plugging in my guitar and twisting a few knobs, it delivered a great acoustic tone. The width and depth of the sound was surprisingly large considering the small size of the amp. The onboard effects sounded great, and being able to record directly from the amp using its line outputs was really useful. But placing a mic on the amp was equally as satisfying and inspirational. Simple, straightforward and sonically pleasing, this amp is clearly going to be an important part of my studio arsenal. I look forward to using the THR30IIA for more cues soon!

Click here for more information about the Yamaha THR30IIA.

Click here for more information about the Yamaha FG-TA.