Open tuning and muting make for a masterful slide technique.

Even in the peaceful daily moments, my mind is working overtime.

The other day, I started to wonder how many notes I play per song at a typical gig, so I did the math. A four-minute song at 100 bpm (beats per minute) contains approximately 100 measures of music.

Let’s say each measure contains one chord. That means my left hand forms a new chord shape a hundred times per song. If I’m fingerpicking eighth notes in my right hand, that’s 800 notes per song. An average gig consists of 30 songs, so that’s approximately 24,000 notes and some 3,000 chords.

At a musician’s typical pay, that works out to … hmmm. Don’t get me started!

Playing guitar is intense. We take a piece of wood strung with high-tension wires (heavy gauge string tension is around 40 pounds) and use one hand to strum, fingerpick, tap, rake and palm-mute in order to execute precise rhythms, while the other hand forms elaborate chord shapes, scales, arpeggios and double-stops … and we do all this thousands of times per song. 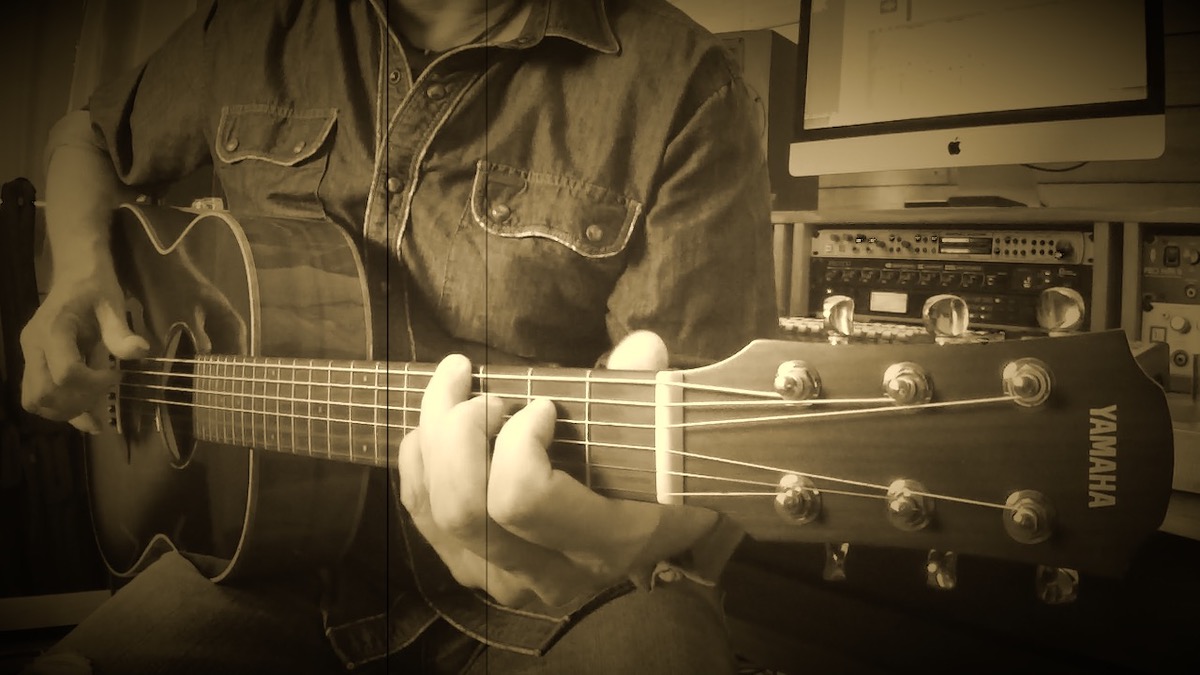 As if that isn’t enough, we’re called upon to improvise single notes over harmonic structures to create melodies. Sometimes we’re awesome and other times … well, other times we’re human.

One technique I know a lot of guitar players struggle with is slide guitar. In my opinion, there are two main reasons why. First, the slide needs to be placed directly over the fret-wire in order to achieve perfect intonation (not directly behind it, as we’re used to). Second, both hands need to employ muting techniques in order to reduce unwanted overtones when moving the slide.

For many, this combination can be frustrating, but if you follow the steps listed below and watch the video I’ve filmed especially for you, you’ll be well on your way to sounding like a slide master. Oh, and one more tip: You’ll find that playing a guitar with heavier strings and a slightly higher action (i.e., one where the strings are not very close to the fretboard) will help you achieve better slide tone.

Put a slide on the little finger of the hand you use for fretting — for right-handed guitarists, this will be your left hand — and place all four fingers flat across the strings, perpendicular to the frets, resting lightly on the strings to mute them. (Although some well-known slide players put the slide on their ring finger, I’m advocating placing it on your little finger so you can still form chords with your first three fingers.)

Now move your whole hand as a single unit until the center of the slide is directly over the fret of choice. Lightly muting the strings behind the slide this way prevents unwanted rogue notes from being produced when in motion.

Place the thumb of your strumming/picking hand — for right-handed guitarists, this will be your right hand — on the fourth string (D) and allow it to mute not just the D string, but the A and E strings too. Then rest your index finger on the G-string, your middle finger on the B-string, and your ring finger on the top E. At this point, all six strings will be muted.

Now finger-pick the six strings, un-muting one string at a time in order to hear just that note. Adhere to this method, and your slide playing will forever be clean and cacophony-free!

That’s the technical side. Now we need to find an easy way to hit all of the right notes.

If you know your chord-tone arpeggios and scales, you can play licks in standard tuning. However, one of the best ways to locate chord tones for slide playing is to tune your guitar to an “open” chord (something often referred to as open tuning). This will give you six chord tones over every fret.

To tune a guitar to “Open G,” for example, detune the high and low E strings a whole-tone down to D, then detune the A string a whole-tone down to G. Playing all six strings open (i.e., unfretted) will now result in a G Major chord; the notes produced, from low to high, are D – G – D – G – B – D. Placing the slide directly over the fret-wire at the 12th fret will give you the same tones (and the same G Major chord) an octave higher.

Since open tuning results in a chord over each fret, you can play other chords (and each of their individual chord tones) by simply moving the slide. In Open G, moving the slide to the fifth fret produces a C Major chord, while moving it to the seventh fret produces a D Major chord. I’ve found that sliding into chords from a whole step below can often sound really good.

If you know your harmony and theory, you’ll also know that Major chords contain three of the tones found in the relative Minor chord. For example, G, B and D on the top three strings are the Minor third, fifth and Minor seventh of an Emi7 chord. So, we actually have Minor chords covered too!

The Yamaha CSF-TA TransAcoustic guitar I’m playing in this video is tuned to Open G, and all the reverb and chorus effects you hear are being produced by the guitar itself (more on that shortly), though I do add some drive and delay from my Line 6 POD® Go effects processor.

After the performance, I go over all the techniques discussed in this article so you can see and hear how applying my method pulls it all together for super-clean and precise slide playing, even at higher gain settings.

The Yamaha CSF-TA TransAcoustic is an acoustic guitar with built-in reverb and chorus effects that are available even when the guitar isn’t plugged in. Its small “parlor size” (a body size that’s popular among blues and folk players) makes it the perfect instrument to take to the park, beach or gig and still enjoy ambient inspiration. 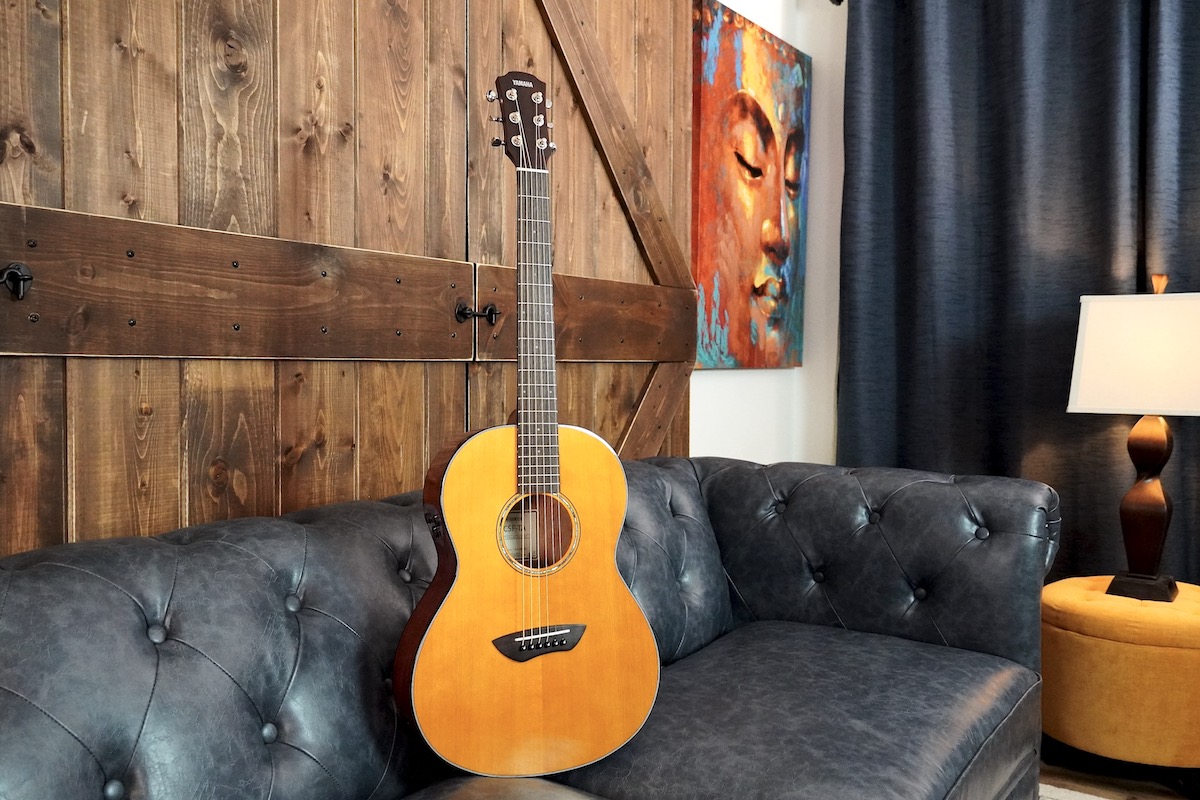 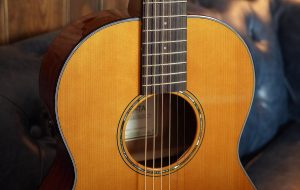 The guitar features a solid Sitka spruce top, mahogany back and sides, rosewood fingerboard and bridge, plus a stunning abalone inlay around the sound hole. It even comes with a hard gig bag, perfect for those last-minute getaways and overhead storage.

It’s no surprise that guitar players constantly strive for better tone, technique and the ultimate instrument. I think we are just wired that way — the challenge of bending an inanimate vibrational counterpart to our will is what motivates us.

We may never achieve perfection as a musician, but we can take positive steps towards that goal with hard work, passion and an active mind for learning. Keep pushing yourself forward!

For more information, see our two-part blog article “How to Play Slide Guitar.”