These keyboard voices can really come to life when you know how.

Welcome to Part 2 of this two-part article about the Super Articulation voices contained in select Yamaha keyboard instruments, including Genos, Clavinova CSP, CVP-700 series, CVP-800 series, and the PSR-S775, PSR-SX700, PSR-S975, PSR-SX900 and PSR-A3000. “SA voices,” as they are known, allow you to access different sonic effects depending upon how you play the keyboard or use the pedals.

As mentioned in the previous article, there are thumbnails to the left of some voices in the voice selection screens of most Yamaha instruments. If you see an “S.Art” or an “S. Art2,” that’s an indication that it’s a Super Articulation (or Super Articulation 2) voice:

As we discussed in Part 1, many Super Articulation voices allow you to create a realistic legato when going from one note to another. (Legato is an effect whereby a wind player does not “re-tongue” their instrument when playing a new note, thereby slurring from one note to the next.) In the case of a stringed instrument like a guitar, the equivalent of not “re-tonguing” is called a “hammer-on,” whereby you go from a lower note to a higher note on the same string without re-picking it: the fretting hand simply pushes the string down on the neck of the guitar.

The Concert Guitar voice replicates that effect in a similar way, so, for example, if you play a C note and then the adjacent D in a legato way (with a low velocity), you will hear a realistically played “hammer-on,” with no second string attack, just a higher pitch:

Now try playing those same two notes again but instead play them staccato (i.e., lift your hand off the keyboard between notes). This time, you’ll clearly hear the sound of a string being re-plucked. As with all Super Articulation voices, these are actually two completely different recordings of a guitar being played two different ways!

If you repeat the same exercise, but play the second note with a very high velocity (while still holding down the first note) you’ll hear a pronounced slide effect instead.

Alternatively, if you press and hold that C note again, then press down on the left pedal on a Clavinova CVP/CSP, the pitch will slide from a C to a D as if a guitarist bent the string to make the pitch go up: 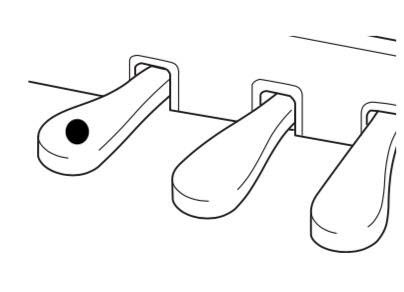 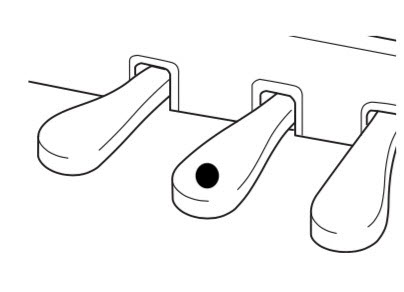 You can effectively intersperse these into the notes as you play, as though the musician’s hand is alternately tapping the body and playing strings.

Fret noise is caused by a finger moving on a string while positioning the hand for the next note. Fret noise effects can be easily added to many Super Articulation guitar voices, depending upon how you play or use the pedals.

The easiest way to generate a fret noise on demand is to use the left-hand (sustain) pedal as follows:

1. Play a note softly on the keyboard, then press down on the sustain pedal to hold it. When you release the pedal, you will hear a hand mute the string.

2. Now play several notes at the same time with a much harder velocity, and hold them with the sustain pedal once again. This time, when you release the sustain pedal, you will often hear fret noises of varying volumes.

A harmonic on a guitar is a bell-like tone that’s produced by lightly touching a string in a specific place with your fretting finger as you pluck it with your other hand.

To hear this recreated in a Super Articulation voice, start by calling up the Folk Guitar Harmonics voice:

This voice allows you to instantly access harmonics from the keyboard by simply pressing down on the center pedal (Clavinova CVP/CSP). Begin by pressing down on the sustain (left) pedal and play a few notes. Then stop playing, and as those notes continue to ring, press down on the center pedal as well. Now play a few additional notes to add some harmonics to the notes already being held. Guitar players will freak out when they hear this!

On a synthesizer, a feature called “portamento” makes it possible to slide between notes without actually hearing the intermediate notes clearly — something that’s also very easy to do on stringed instruments or on a trombone.

However, a clarinet (like a saxophone) has keys that define notes, so a glissando on these instruments cannot be a smooth slide but must instead be a series of quick notes played in succession. Many Super Articulation 2 (SA2) clarinet voices contain an authentic glissando played by a talented musician. To hear how this works, start by calling up the Romance Clarinet voice:

Glissandos with this voice are available if you play any 7th, M7 or octave while holding down the root note:

For example, if you hold a low C note and play any of these intervals above that key, you will hear a beautiful glissando between the bottom note and the top note. This is one of my favorite things to do with any SA2 voice because it always surprises people when they suddenly hear this in the middle of a piece!

On other SA2 voices, pressing a pedal while you play or release a note enables you to add other articulation effects such as bend up/down, brass falls, etc.

This brings up an important feature. To keep track of all the hidden special articulations (and pedal assignments too), it is useful to refer to the Information (i) screen for each voice. You can call up the Information window of the selected voice by touching the S.Art or S.Art2 icon that appears to the upper right of the Voice name on the Home display: 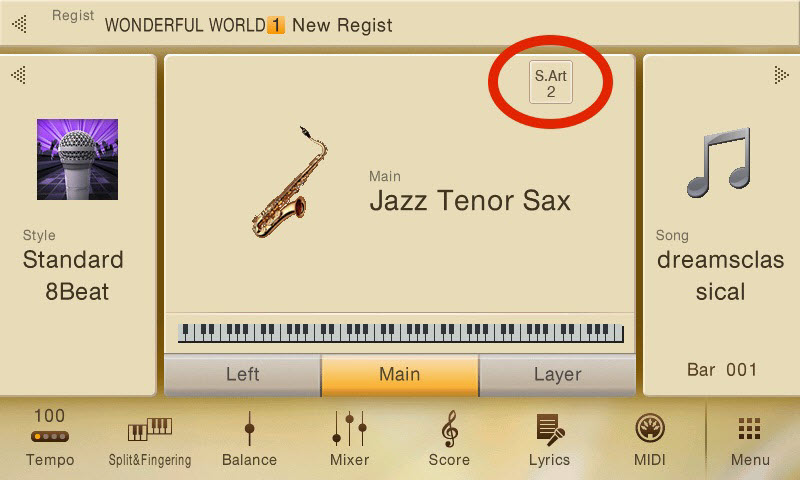 Alternatively, you can select the Information (i) button below the voice selection screen:

That about wraps it up for our introduction to the power of Super Articulation, but there’s a lot more to explore, so roll your sleeves up and dig in — you may well discover some new things about familiar voices!

“Getting the Most Out of Audio to Score”

“Which Digital Piano Is Right for Me?”

“flowkey and the Yamaha Clavinova”