Percussionists Jauvon Gilliam and Eric Shin juggle teaching, performing, family and their own businesses with a special blend of talent, passion, positivity and determination.

Jauvon Gilliam and Eric Shin aren’t well acquainted with the oft-repeated saying, “When one door closes, another opens.”  For this powerhouse percussion duo, opportunity repeatedly knocks, and doors keep opening wide. Shin’s and Gilliam’s plates are more than full. Both are percussion lecturers at the University of Maryland School of Music, where Gilliam is also co-director of percussion studies. Both are principals — Shin on percussion and Gilliam on timpani — for the National Symphony Orchestra (NSO) in Washington, D.C. Both are also fairly new successful entrepreneurs, and both have equally successful spouses and young children.

There’s no big secret behind their success — just an old-fashioned com­bination of passion and grit as well as “uncompromising determination and a positive attitude,” Shin says. “I like doing many things at once and being engaged in them all at a deep level.”

Gilliam’s philosophy — “working harder and smarter, so that when the time comes, your average is better than everyone else’s best” — worked well for him when he landed the NSO timpanist position.

In 2009, he packed his drums into a rented minivan and made two 26-hour cross-country trips once for the initial NSO audition and a second time for the callback. He prepared for the latter by contacting and playing for several major timpanists between Winnipeg, Manitoba, Canada, and Washington, D.C.

In the Music Room 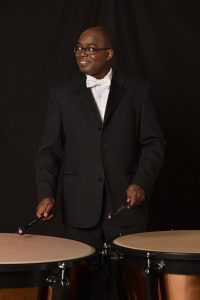 Gilliam won his first national piano competition at age 11 and received a full scholarship in piano performance to Butler University in Indianapolis, but he switched to full-time percussion at the urging of Jon Crabiel, one of his teachers.

Shin started off playing the piano too, but it didn’t capture his imagination like the drums.

Gilliam and Shin met in 2001 at the Cleveland Institute of Music, where they both studied with renowned timpanist Paul Yancich, a “perfectionist who has figured out every technical aspect of playing timpani and at the same time is a total natural,” says Shin.

“[Paul] instilled in me this ‘sponge’ mentality,” says Gilliam about his teacher turned friend and colleague. “He is a very cerebral man of few words when it comes to teaching, but he knows so much. You have to listen up. It might be subtle, but he’ll teach you what you need to know. You learn more by watching him than during lessons because he’s so good.” 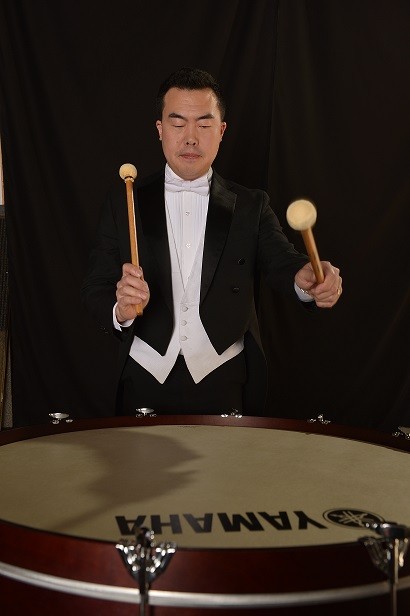 Gilliam figures out what makes students tick and uses that to fuel their individual fire. The most successful students are those who soak everything up, he says.

“I’m a pretty enthusiastic, all-in, hands-on, engaging teacher,” Gilliam says. “I like to dive deep into the hows, whys, wheres and whens — the synesthesia of it all — hearing colors and seeing palettes. All these things create an atmosphere of timpani culture, and my students just eat it up. They’re fast, eager learners who immerse themselves in the culture, attend concerts, listen to recordings and ask the right questions.”

Gilliam’s definition of professional success is simple. “I want my students to achieve excellence with a happy heart,” he says. “I have a great passion for music, obviously, but also a passion for showing students how awesome it is to do what you love. As long as they’re happy and decent human beings, then I’ve done my job.”

Shin describes his teaching approach as “relaxed,” but says that he can be very demanding. “If you take what [students] bring to the next level, they’re refreshed, energized and curious, and they return prepared to learn more,” says Shin.

He reminds his students to nurture their curiosity and passion for music and seek musical experiences to keep them focused and engaged. It’s easy for students to get stressed, so Shin encourages them to recast their mindset to “busy” rather than “stressful.”

“Everything becomes easier as soon as a student views something as positive,” Shin says.

Shin tells his students to connect with music by attending a performance or using their time in a practice room “almost as meditation, an escape.” He emphasizes the importance of practice and often repeats the famous words of Vince Lombardi, the legendary Green Bay Packers coach: “Practice doesn’t make perfect — perfect practice makes perfect.”

Shin values honest, transparent commu­nication with his students. “It’s a balance as educators that we’re all trying to achieve.I will always work with [students] and respect where they are mentally,” he says.

In the Front Office

Shin became a restaurateur in 2016 with SEOULSPICE, a fast-casual Korean restaurant that now has three locations and is soon to be franchised. It serves as a way for Shin to flex his artistic muscles in different ways, from creating the menu and designing interior spaces to launching the website, and creating branding elements, marketing and more.

Opening day was a little insane. About 30 minutes prior to opening, a line wrapped around the block, so the fire department was there. To make matters worse, they ran out of food in four hours. “It was crazy, exciting, fascinating and busy in all the best ways,” says Shin.

Shin adds that the diversion of opening SEOULSPICE served a definite purpose. “I had only been with the orchestra a few years,” he says. “Being an orchestra musician can be very stressful, especially when you’re a principal. You have all these responsibilities. I found that having other commitments eased that pressure.”

Gilliam’s Capitol Percussion, founded in 2014, offers instrument, backline and sound equipment rentals, which is perhaps a more logical, natural extension for a musician. But he, too, makes no bones about the hard work that’s required. “Educators and business owners have to be good time managers,” he says. “You can’t half-ass anything. If you don’t do the work, nobody else will. You just put your head down and do it.” Both Shin and Gilliam use various tools to keep it all together.

“You grow a business, then you hire people who are smarter than you to eventually do the things you don’t need to do,” Gilliam says. “I’m getting to that point. I’m a busybody, and I embrace it.”

Gilliam also emphasizes the importance of technology. “Having the tools in front of you to be able to do what you need to is vital,” he says. “The fact that I’ve held the NSO job for a while gives me some leeway to put more energy into my business. I’m up early. I’m up late. I work during orchestra breaks and lunch hours. Everything is mobile; my business is on the cloud. I work whenever I can to reach out to a client, send an invoice, ensure we have the right equipment or talk to my operations manager.”

Shin also harnesses the power of technology to help manage his time and keep everything running smoothly. “Apps and calendar alerts are my lifelines,” he says. “I also use a free web-based program called Trello for the restaurant, and I use Google Drive to plot out orchestra stuff in advance and share it with my colleagues and NSO management.” No one man can go it alone, and both Gilliam and Shin know this.

Teamwork among family, colleagues, friends and employees help make the dream work, according to Shin. “Surround yourself with the best employees, and take better care of them than yourself,” he says. “Respect fellow musicians, spend quality time with friends and family, and be consistent with sacred times together. It’s important to be connected with everyone in your life.”

Strong human connections keep Gilliam going as well. “I surround myself with people and mentors who know more than I do,” he says. “That’s how I grow. Also, a mantra from Nelson Mandela works well for me in business and in the orchestra: ‘It is better to lead from behind and to put others in front, especially when you celebrate victory when nice things occur.’ I try to be in the moment where I’m at, but the hustle never sleeps.”

“So many of my friends said I was crazy to open a restaurant,” Shin says. “They said it was risky to enter an industry where so many fail. My response was ‘What possibly could be riskier than going to school and getting a music degree and trying to land an orchestra job?'”

JAUVON GILLIAM AT A GLANCE

ERIC SHIN AT A GLANCE

photos by Rob Shanahan for Yamaha Corporation of America