Flute prodigy Mimi Stillman showcases the physical, intellectual and emotional aspects of music making — and she shares these skills with students around the world.

Mimi Stillman was only 12 years old when she started working toward her bachelor’s degree at the prestigious Curtis Institute of Music in Philadelphia.

“I did a lot of media interviews about being a prodigy, but I was very lucky,” she remembers. “I was just doing what I loved to do. I had the most supportive family and teachers who thought of me as a whole person and not just a music-playing being. [My family] made sure I always had balance and perspective in my life.” 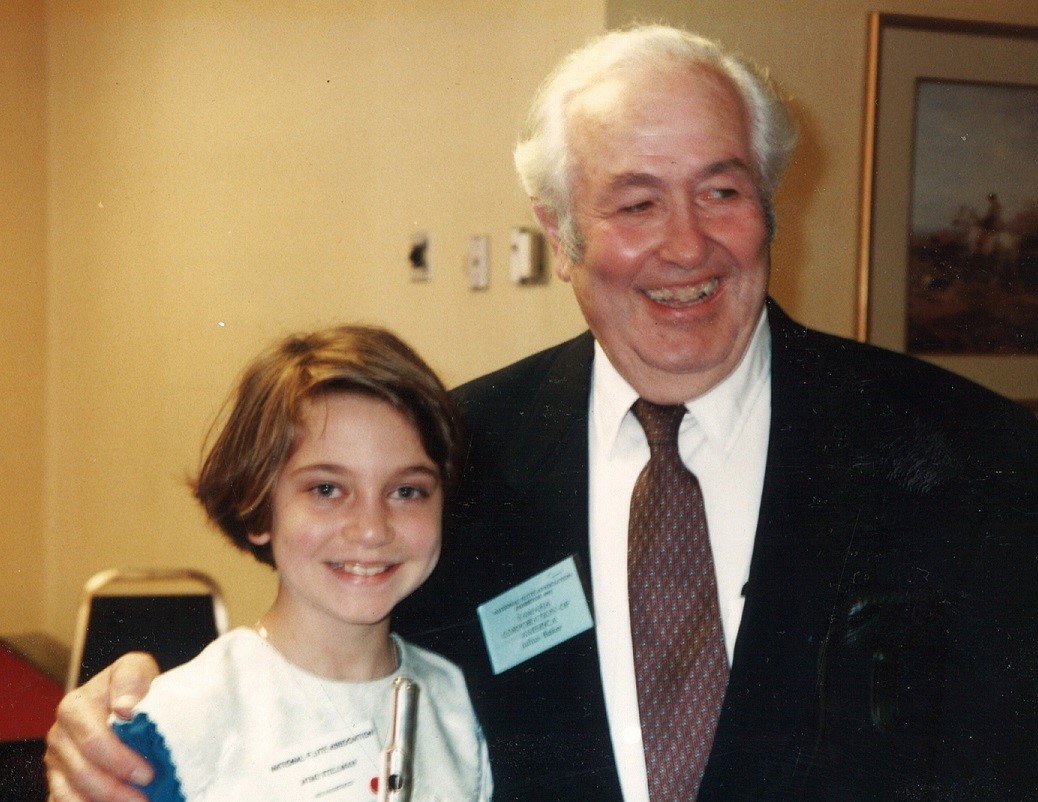 Her lead teacher at Curtis was the legendary Julius Baker, who had been the principal flute for the New York Philharmonic for 18 years before retiring to focus on instruction. “He took me under his wing with great warmth and caring,” Stillman recalls. “I had long admired his playing on recordings. Even though he was rather senior when I began studying with him, Julie was in fantastic playing condition and would play in every lesson. I will never forget the overwhelming thrill of hearing his signature, lush Baker sound right beside me while we played duets.”

Baker, who became a beloved grandfather figure to the preteen Stillman, insisted that his students were their own best teachers — a philosophy Stillman has embraced throughout her career. “There was so much profundity to that,” she says. “You might spend an hour with your teacher, but you’re always with yourself. With time, I unpacked the depth and wisdom of what he was saying. You have to be critical, learn to listen, learn to help yourself. And hopefully when you become a teacher, you’ll pass along to your students the skills and independence to coach themselves.”

Beyond the technical skills, being your own teacher involves “questioning, learning, going beyond the notes,” Stillman says. “I’m always thinking of ways to do that myself and with my students.”

Stillman graduated from Curtis at 17. Even though she immediately took on a full schedule of performing, including extensive travel, she juggled her flute career with an academic one, earning a master’s in history from the University of Pennsylvania.

After completing courses about art history, military strategy and medieval history throughout early modern Europe and Asia, Stillman wrote her thesis on the influence of Asian music on the French composer Claude Debussy.

“Since I was a child, I felt a kinship with Debussy’s writing for flute, which deepened into a scholarly interest,” Stillman says. In addition to her thesis, she arranged a book of Debussy songs and has written several articles on aspects of his music.

During the 2012-2013 season, Stillman’s chamber group, Dolce Suono Ensemble, presented a season-long series of concerts celebrating the composer’s 150th birthday. “At the same time, I celebrated Debussy’s birthday with my own personal project, which I called ‘Syrinx Journey.’ I performed and filmed his flute masterpiece, ‘Syrinx,’ every day for the entire year — in concert, in my living room, on a train, with friends. I started and ended on August 22, his birthday.”

Stillman uploaded all 366 videos to a special YouTube channel (Syrinx Journey) and continues to add bonus videos. “I never tire of the genius of this evocative piece,” she says.

The academic aspect of music is a crucial part of Stillman’s professional life. “I feel like music encompasses everything,” Stillman says. “It all works together. Playing music involves the physical. … It’s a skill; there’s drill [and] there’s daily practice. But the intellectual part always has to be active in the playing and the execution, but also the artistry, the expression, the learning, the interpretation about what you’re playing. And music also functions on a really emotional level, of course.”

Stillman explains that some musicians’ approach to learning new pieces is, “Let me learn the notes, and then I’ll figure out what they mean.” But for her, knowing the history and context of the music allows the work of interpretation to start right from the beginning.

Stillman writes most of her own album and program notes, and her appreciation for the past works its way into everything she does. “Intellectual content enriches the music,” she says.

In a  review of  Dolce Suono Ensemble, The New York Times captured her artistic goals: “Ms. Stillman is not only a consummate and charismatic performer but also a scholar. Her programs tend to activate ear, heart — and brain.”

Stillman constantly pushes herself to learn new skills — including new approaches to technology and social media to reach her audience. “My learning curve has been steep on how to share my music through technology,” she admits.

Embracing the challenge, Stillman launched a Facebook livestream series called “Tea with Mimi,” which mixes performance with discussion and education. “One of the greatest blessings about being a musician is that we get to grow our entire lives! I hope every day to become a better flutist and artist or at least to learn something in the process of trying,” Stillman says.

Another recent challenge has been learning how to improvise cadenzas in Mozart concertos — what Stillman calls “a daunting and mind-opening challenge!” 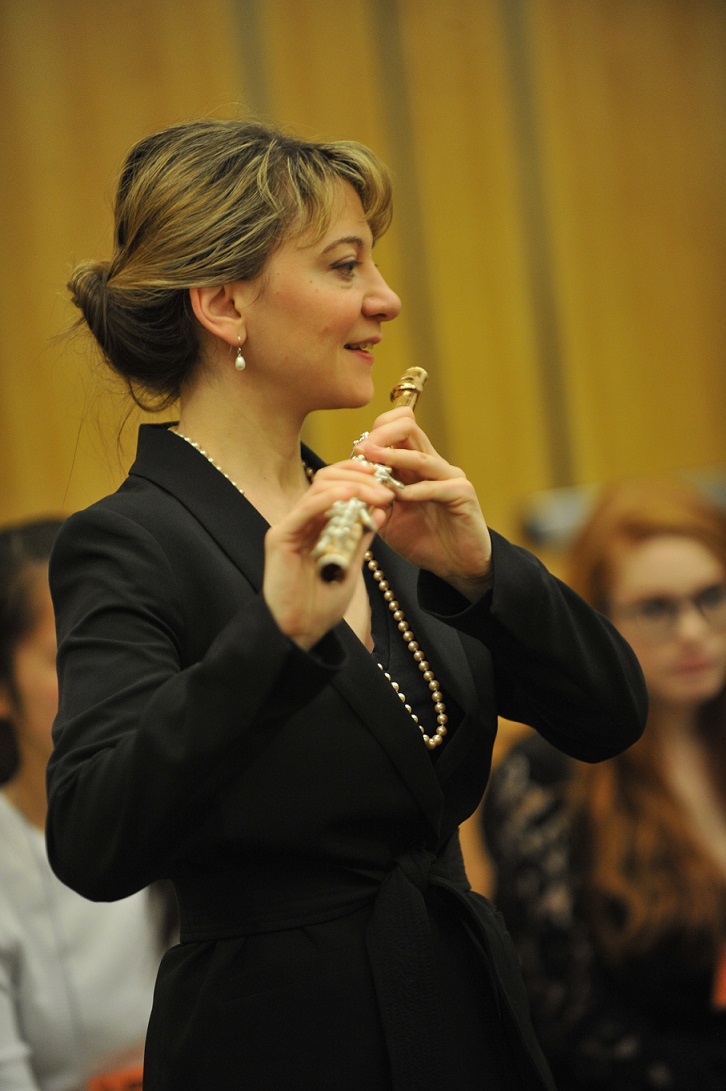 Stillman laughs when asked if her past as a prodigy gives her any insight into the best way to teach music to kids. “As a 12-year-old and then teenager performing in professional settings, I never realized how young I was!” Stillman says. “I was doing what I love, having fun and making friends. It was only much later that I realized that I’ve had an unusual life in many ways.”

Stillman often visits schools to perform concerts and lead clinics. “Instilling an appreciation and a love for music — and a passion for making music — is really important,” she says. “If teachers are able to build lifelong listeners, that’s a huge success. And if they build someone who plays music all [his or her] life, even better.”

Beyond gaining a solid foundation in technique, young students should have an understanding of the music canon, Stillman says. “I have seen the power of [classical] music’s impact on people who have never heard it before,” she says.

One example from almost 20 years ago sticks with Stillman. Over the course of three days, she performed in front of 1,000 students in San Diego public schools, with classes in Spanish and English. “In a school with no music program, one little boy raised his hand during the Q&A and asked me if I would play the Mozart again,” she says. “Coming from a child who had probably never encountered Mozart before, it was awe-inspiring. I experienced firsthand the power of music as a universal language of communication.”

Stillman began teaching inner-city students in Philadelphia on a volunteer basis when she was around 14 and is now an artist-in-residence at Temple University.  “My experience has taught me to be creative and open-minded and most of all to be resourceful in solving problems and finding ways to unleash the musical spirit in my students,” she says. “An important part of being a musician is psychological and emotional, so being intuitive and sensitive to others is key.”

Stillman grew up speaking Spanish and English. “As a Spanish speaker, I feel a strong connection to Philadelphia’s Latino populations of all backgrounds,” she says.

Stillman’s Música en tus Manos (“Music in Your Hands”) program, operated by her chamber group Dolce Suono Ensemble and funded by an award from the Knight Foundation, puts on bilingual events including performances, presentations, and side-by-side performances with Latino students in Philadelphia.

One of Stillman’s goals as a teacher is to show her students how to practice and interpret music for themselves. “I want to foster their development as independent, creative artists in their own right,” she says.

Stillman embraces teaching by example, inviting her students to be part of her day-to-day life. “My students see what I do as a performer, soloist, chamber musician and teacher,” she says. “They also see me as an entrepreneur. They see my career from close up, which makes them think about career paths for themselves.”

Stillman also teaches technique collaboratively. “During lessons, I demonstrate the pieces they’re working on as well as play duets … and flute ensemble works with [them],” she says. “We even warm up together with technical exercises at studio classes and before my studio recitals. I think this hands-on approach fosters strong skills and confidence in my students.”

Listening can also be philosophical. “As musicians, we know in our mind how we want [the music] to sound. … There’s the concrete listening and the idealized listening.”

Stillman sums up the duality of her listening philoso­phy with a Pablo Picasso quote: “‘Everything you imagine is real,’” she says. “I think that’s so fitting for artists. We are constantly inventing a world for ourselves in music.”

Mimi Stillman At A Glance 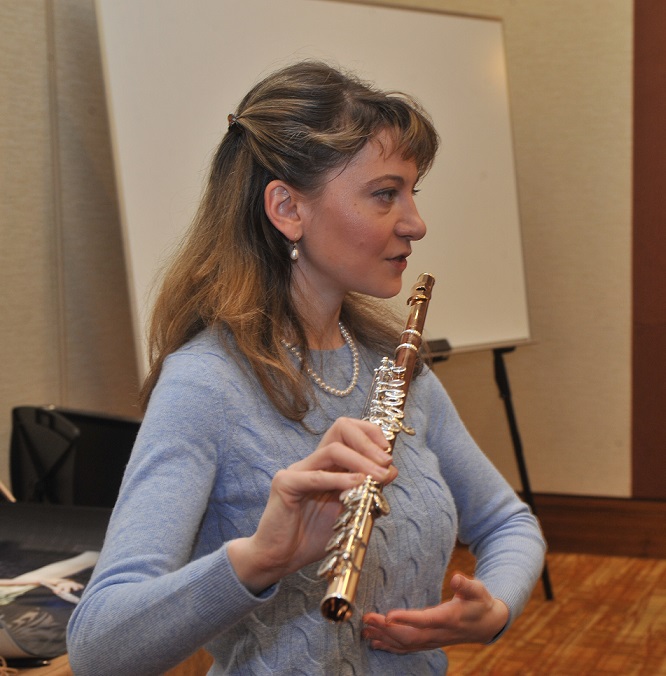