How Trumpeter Sean Jones Gets Respect

Some educators command attention with a booming voice and a larger-than-life presence. Sean Jones employs a completely different tactic that is equally — and probably more — effective.

He teaches with a soft voice and an unassuming demeanor. But the acclaimed jazz trumpeter and music educator instantly gains his students’ respect. How? “[I] lead by example,” he says.

Leading by example involves spending a lot of time playing for his students, rather than just discussing concepts with them. “My students learn from me by me showing them: This is how you play a scale. This is how you articulate,” he says. “I believe the apprenticeship approach is crucial in artistic development.”

According to Jones, leading by example is more important than titles or formalities. “I’m not one of those professors who needs to be called ‘Professor Jones.’ Call me Sean!” he says. “But understand that my work speaks for itself. That’s what garners respect, not a title.” 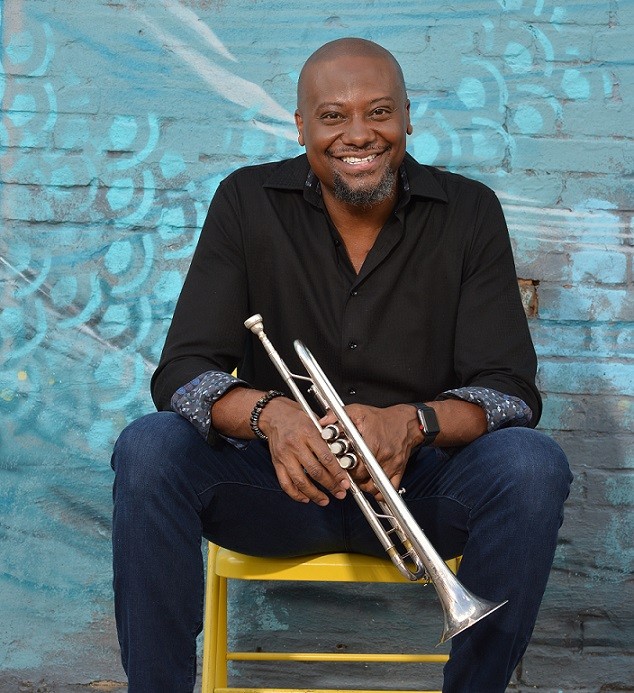 When Sean Jones was 16 years old, he wrote his mother a letter declaring that he would be a college professor. The letter, which focused on what he planned to be doing in 10 years, was an assignment for an English class at Warren G. Harding High School in Warren, Ohio. The teenage Jones wrote about the connection he hoped to make with his future students, how he didn’t want to work a 9-to-5 job and that he planned to record his own album.

“And lo and behold, all those things happened,” Jones says. “[My mom] still has the letter, which is cool.”

Jones started playing the trumpet when he was 10 years old. “Everybody wanted to play the clarinet, flute, drums or saxophone; I wanted to be different, so I picked up the trumpet,” Jones says. “I fell in love with the challenge of playing [the trumpet]. … The harder it got, the more I wanted to practice.”

That love for taking on new challenges and opportunities eventually led Jones to serve as chair of the brass department at the Berklee College of Music in Boston, record eight albums, start Carnegie Hall’s National Youth Orchestra (NYO) Jazz program and take on his current role as chair in jazz studies at the Peabody Institute of the Johns Hopkins University in Baltimore.

“Musicians have the ability to make or break a person’s day with a sonic vibration,” he says. “I take the job of educating and performing very seriously. I know the sounds created can heal or destroy a person.”

As a child, Jones was introduced to the world of music through church. He recalls that his childhood church services were composed almost entirely of music, helping him develop musical skills early in life. “I was playing and singing by ear at a very early age and at a high level,” he says.

Jones believes that music has a spiritual component. “Music — and sound — is the most powerful sense we have,” he says. “There is something magical about it. It resonates with your soul. It vibrates throughout your whole spirit and consciousness.”

In addition to performing with his church ensembles, Jones also performed with his high school’s music programs. Jones really wanted a jazz combo class, so he asked one of his teachers about starting one. “I actually founded the jazz combo at Warren G. Harding High School,” he says. 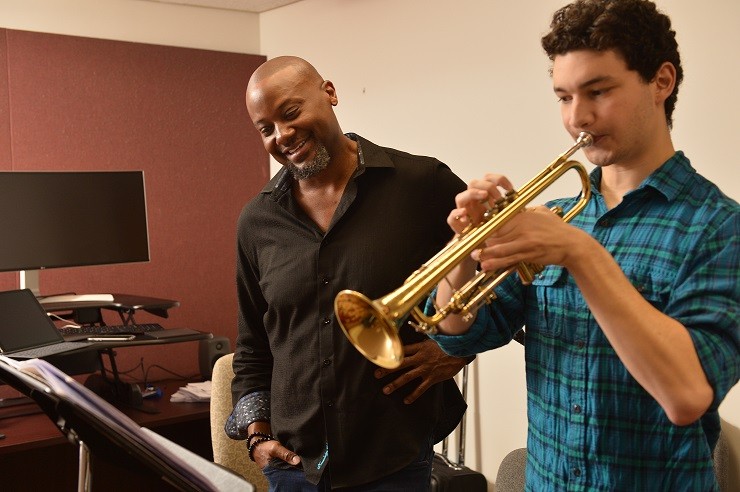 Jones went on to Youngstown (Ohio) State University, earning his bachelor’s degree in classical trumpet performance, then to Rutgers University in New Brunswick, New Jersey, for his master’s degree.

He recalls two Youngstown State professors — Tony Leonardi and Stephen Gage — who influenced his teaching style in different ways. While Leonardi had a tough-love approach, Gage was uplifting and spiritual.

As an educator, Jones combines aspects of both approaches. “[Students] want to feel fulfilled. … However, the art requires us as educators to let students know [when] their output is subpar,” he explains.

While he never wants to stifle a student’s creativity and confidence, Jones also emphasizes that some music fundamentals are non-negotiable. “You have to understand phrasing. Technique is important,” Jones says. “It’s my job to nurture young minds while curating excellence.”

Jones recognizes his own teachers as some of the most important pillars of support he had growing up. When Jones wanted more time to practice, one of his teachers gave him the key to his rehearsal space. Jones would then spend all night practicing. “I’ve always had great teachers, and I think subconsciously, that made me want to be a teacher myself.” 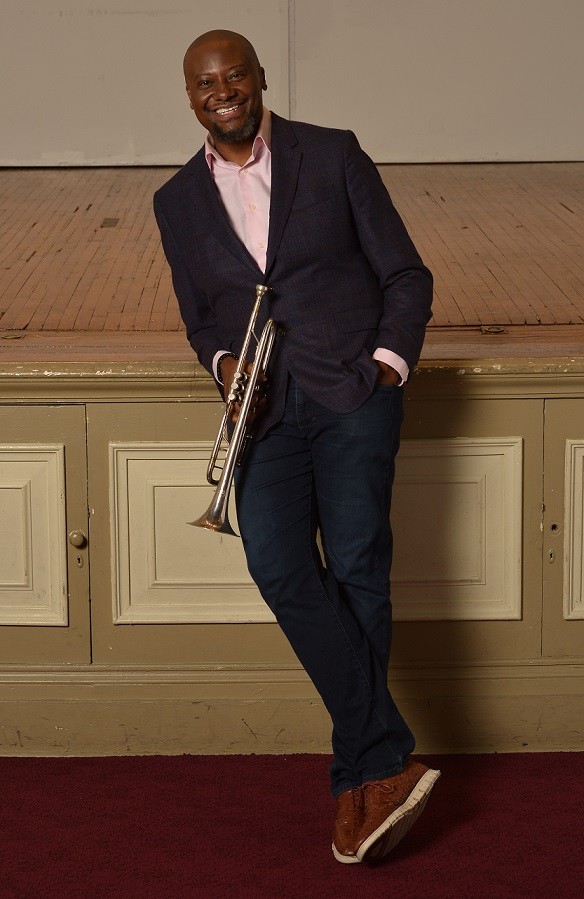 Jones says that his teachers also helped him find paying gigs. “My mom didn’t have a lot of money, so I had to play gigs to [help] make ends meet,” he says. “I’d be in school all day, and at night I’d travel to Pittsburgh or Cleveland to do gigs.”

Jones navigated different types of gigs, and he encourages his students to be prepared for a variety of musical situations. “The hardest gig I ever played was a circus; you’re just repeating the marches forever,” he says. “That gig taught me pacing, it taught me endurance, and it taught me that I didn’t want to play in the circus ever again.”

Regardless of the type of gig, Jones says that performers need to understand the music to be successful. “I played in wedding bands. I played bar mitzvahs. Name the scenario, I played it,” he says. “I attribute my success in every one of those situations to my ability to be pedagogically sound and to know the genre sensibilities enough to be authentic.”

Performance continues to be a key component of his career. “Just because you’re an educator doesn’t mean you can put down your ax and just teach,” he says. “Keep playing! I find educators all the time who gave up playing. I think that’s a bad thing because you become disconnected from the music itself.”

Educators need to stay connected to the music they are teaching as well as with the students themselves, Jones adds. Jones recommends that educators attend their students’ performances outside of school, if possible.

“Music is constantly evolving,” he says. “The older I get, the more I realize, I have to [keep] studying what’s current. It’s important to stay relevant.”

Berklee, Peabody and Beyond

In 2018, Jones finished his fourth year of teaching at Berklee, where he spent his time developing a curriculum that would give all students a solid pedagogical foundation.

“The big thing I added was the require­ment to do various etudes, no matter what style of playing you focused on,” he says. “You had to do Clarke studies. It’s important to study those etudes, … so that you can get a strong foundation. That’s part of the lineage of playing a brass instrument.”

Jones is also a proponent of a diverse education, meaning that students are educated in a variety of styles. “They want to be prepared for more than the symphony orchestra that [accepts] five people every few years,” he says.

He is now bringing this concept of a diverse education to the Peabody Institute. Jones plans to integrate jazz studies into the school’s broader music curriculum.

While he enjoyed his time working at Berklee, he knows he can bring a lot of growth to Peabody’s jazz department. “I wouldn’t be able to live with myself if I didn’t go after the opportunity,” he says. “It’s time to rise to the challenge.”