Trombonist Wycliffe Gordon Does it All

A true globetrotter, Wycliffe Gordon splits his time on a multitude of musical pursuits, including performing, composing, arranging and a dedication to educating the next generation of musicians.

Their excitement is palpable. The lights shine down from above while the Artist-in-Residence’s master class takes place. Gordon is so close that the students can see their reflection in his trombone.

Following the weeklong residency, Gordon performs with the Good Times Brass Band at Gospel Nation Christian Fellowship in Powder Springs, Georgia, in a setting much like that of his youth. Even though the details are different, the nostalgia is overwhelming. While his father played piano in church, the son is now on stage with his instrument of choice — the trombone — performing in support of a local charity, Calvary Children’s Home.

Fast forward one week to April 30 and May 1. Gordon is halfway around the world, a featured soloist with the Tuxedo Big Band and Grimethorpe Colliery Band in two separate concerts at the Limoux Brass Festival in France. It’s a busy life, but to Gordon, it’s the norm.

Gordon’s initial exposure to music came from his father, Lucius Gordon. The elder Gordon was a classical pianist who regularly performed with the local church, so Wycliffe found himself surrounded by church members who found solace in the music, which he, too, experienced.

Later, he followed in the footsteps of his older brother — Lucius Gordon Jr. — in choosing the trombone as a primary instrument. It was a classic case of the younger sibling trying to emulate his big brother. “Whatever he did, I wanted to do,” recalls Gordon. “He played trombone, so I just wanted the trombone because he had one.”

Today, Wycliffe Gordon is recognized as one of the most skilled jazz trombonists in the world. He has received the Jazz Journalists Association Jazz Award for “Trombonist of the Year” eight times and was named “Best Trombone” in DownBeat Magazine‘s Critics Poll from 2012 through 2014.

Gordon’s musical experiences span the professional gamut. As a former long-time member of the Wynton Marsalis Septet, he was a globetrotter surrounded by some of the world’s top musicians. He credits that time in his career as “one of my greatest musical experiences to date.”

Gordon is also a former member of the Jazz at Lincoln Center Orchestra and has performed with many other jazz musicians including Dizzy Gillespie, Lionel Hampton and Branford Marsalis. While trombone may be Gordon’s main instrument, he actually plays 23 instruments, including the trumpet, euphonium, flugelhorn, tuba and even the didgeridoo. In fact, DownBeat Magazine’s Critics Poll honored Gordon with the “Rising Star” award in 2014 for his mastery of the tuba.

In addition to performing, Gordon is a composer and arranger for many accomplished groups and organizations worldwide. In 2011, Gordon was commissioned by New York’s famous Apollo Theater to write a piece that commemorated its 75th anniversary. And among his most popular compositions is a Muhammad Ali tribute, titled “I Saw the Light.”

From the Stage to the Classroom 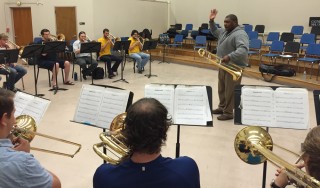 In addition to his time in the spotlight, Gordon has devoted a substantial portion of his career to educating the next generation of musicians. He has taught at the Manhattan School of Music in New York and currently serves as an Artist in Residence for Augusta University in Georgia.

Along the way, he has learned a lot about what makes an educator successful and effective at teaching young musicians. Gordon believes that education does not end upon receiving a degree.

Instead, music educators must evolve as teachers even while they are on the front lines of the classroom. Successful educators, says Gordon, strive to constantly improve themselves. “Don’t get caught in the rut of just having one technique for teaching,” he says.

Gordon regularly uses the “sing-it-first” technique, emphasizing that instruments are merely an extension of the voice. The ability to sing the rhythms, melodies and harmonies of a song helps students internalize the music. “If you can sing something, you can play it,” he says.

Gordon also incorporates dance into his music classes as a way to get his students engaged. Imagine a band room full of self-conscious students swaying with abandon to jazz music. One student may automatically get into the music while another takes a bit more coaxing, but eventually, all the students begin to feel the rhythm.

To Gordon, “any type of music has movement,” and jazz is no exception. Sub-genres of jazz such as the waltz, foxtrot and swing are all dances as well. So in everything Gordon discusses, he tries to implement some type of movement.

The environment in which students learn is also important, so Gordon works hard to ensure his programs are properly supported. A proven method to increase administrative support is to invite key personnel to performances. If administrators experience firsthand the transformative effects of music, they are much more likely to support the music program. “Have them take the temperature with the public and their perception of the band program,” Gordon says. 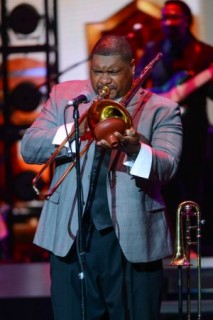 As a child, Gordon found music’s community focus to be among its most appealing aspects. “Being in band meant you were working with a bunch of other students every day, and you had the chance to make music with lots of people.”

Today, he attempts to instill in young musicians the importance of working together. “The band only works when everybody does their part,” Gordon tells his students.

But teaching young musicians this lesson is not easy—and sometimes impossible. When Gordon encounters students who are unable or unwilling to cooperate with the ensemble, he works to draw them out, but at a certain point, he sometimes has to accept that he’s done all he can.

“Accepting that there are some students who you’re not going to be able to teach” has been among the biggest lessons of his educational career, Gordon says.

Although Gordon has learned a lot in his time as a music teacher, his biggest takeaway is much more fundamental. Music is the “great equalizer,” he says. “Music is the one language that connects all people. It helps us celebrate our likenesses and be more accepting of our differences.”

This article originally appeared in the Summer 2016 issue of Yamaha SupportED. To see more back issues, find out about Yamaha resources for music educators, or sign up to be notified when the next issue is available, click here.