Julie DeRoche finds success on stage and in the classroom with a never-give-up attitude and an inclusive, collaborative approach.

In the early 1980s, Julie DeRoche — who had recently received her degree in clarinet performance from Northwestern University — was juggling four jobs to make ends meet as she worked toward a fulltime career in music.

Teaching private lessons, recording commercial jingles as a freelancer, working as the first-call substitute with the Chicago Symphony Orchestra and selling mail-order clarinet accessories out of her apartment all helped DeRoche develop an entrepreneurial approach to music. She also wanted to open her own studio. “You can’t just sit around and wait for something to come,” DeRoche says. “You have to pursue it.”

Now serving as the chair for the Department of Music Performance at Chicago’s DePaul University, where she has taught for more than 30 years, DeRoche inspires her students with this mantra of perseverance. Whether making them repeat their scales again and again until they play with the desired speed and accuracy or assigning them to work with her and other professors simultaneously to perfect their audition skills, DeRoche doesn’t let her students take the easy way out. “I tell my students: ‘You’re going to do it because I don’t give up,'” she says. 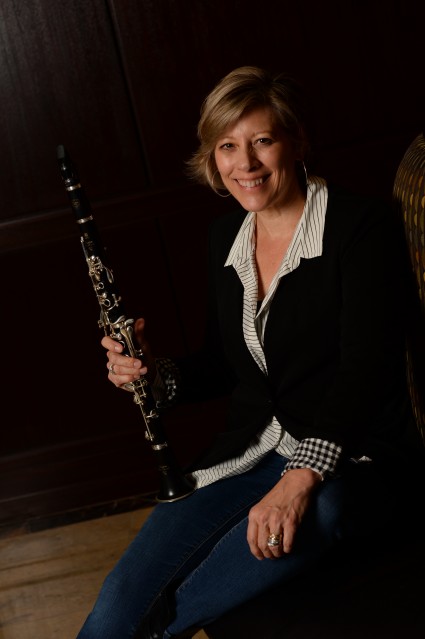 Back in 1968, 9-year-old DeRoche started playing the clarinet in her school band in Oakbrook Terrace, Illinois. Although she originally wanted to play flute, she says she fell in love with the clarinet the instant she set eyes on it. DeRoche went on to spend her high school years performing in the Chicago Youth Symphony Orchestras and teaching private lessons to elementary school students.

Giving private lessons early on helped DeRoche develop a set of teaching skills that she still uses today with her university students.

For musicians who are in eighth grade and under, the focus needs to be on having fun, with some skill-building mixed in. “Get them enamored with it, but don’t forget to teach them skills, so they feel like they’re accomplishing something,” DeRoche says.

Molding elementary and middle school students starts with sculpting the perfect embouchure. “I always say, ‘Bottom lip in, chin muscle down, corners in, jaw forward, top lip stretched down and under the nose,'” DeRoche says.

For beginners in fourth grade, DeRoche doesn’t bombard them with all of this information at once. Instead, she breaks down the technique one component at a time. “I’d say, ‘Right now, I want you to focus on getting your chin down in the perfect place; now let’s play this piece, and we might have some fun with dynamics and rhythm,'” she says.

Mastering technical skills then allows advancing students to craft something beautiful. “I think of techniques as tools in a toolbox,” DeRoche says. “You have to have all the skills, so that you can build a much better, more significant artistic product.”

DeRoche has her students add some color to their music by painting in their emotions. She tells her students to think of someone important to them, down to the details: the color of their hair and eyes, the sound of their voices, the way they walk. She then asks them to think about how that person makes them feel and to weave in the resulting emotions into their playing. “When they think about how they feel, the source feels like it’s coming from their heart,” DeRoche says.

DeRoche worked on assembling her own toolbox when she traveled the world as a musician. While performing with the Chicago Symphony Orchestra as well as various chamber groups including The Chicago Chamber Musicians, Music of the Baroque, Chicago Opera Theater and Contemporary Chamber Players, DeRoche ventured throughout the United States, Europe, South America and Asia.

Collaborating with top-notch musicians fine-tuned DeRoche’s already well-sculpted musical skillset. “Having the opportunity to work with the best musicians [and] great conductors has made me learn so much about the depth of musical understanding you need to play at a really high level,” DeRoche says.

Recording commercial jingles for large brands such as McDonald’s, Froot Loops and United Airlines also honed DeRoche’s sight-reading and versatility since she often did not receive music prior to recording. “It’s very expensive to do these commercials, so you have to be right and you have to learn fast,” she says.

In 1984, DePaul University, just 10 miles from DeRoche’s alma mater, was in need of a new clarinet instructor. Professor Larry Combs reached out to DeRoche, and she added adjunct professor to the long list of jobs she was juggling at the time.

That first year, DeRoche had only six clarinet students, so she worked quickly to find ways to attract more students to the program. She started by organizing and managing summer clarinet workshops, which she co-taught with Combs. Then, she had a breakthrough. During the summer workshops, she and the other faculty members were advertising themselves as a team. “So I thought: Why don’t we create a team approach to teaching clarinet?” she says.

DeRoche decided it would benefit students to have access to more than one professor during their college careers. “It unifies the students,” she says. “Because the faculty don’t draw these boundaries, [the students] don’t have this jealousy. They support each other.”

As part of the team approach, professors evaluate each student’s needs for growth. DeRoche recalls one student who went to many auditions but often lost jobs to others with better musicality and articulation. DeRoche then worked with the student on articulation while Combs worked with him on his musicality. “He got a job pretty quickly afterwards,” she says. “We look at what the student needs and decide what works.”

DePaul’s clarinet program now averages about 25 students every year, and all wind departments at DePaul practice the team-learning approach that DeRoche introduced. “You’re constantly working to make it better, to make the level of experience the students have more professional,” DeRoche says.

DeRoche’s belief in teamwork and bringing people together goes beyond her work at DePaul; it has also been a major part of her work with the International Clarinet Association (ICA).

DeRoche’s first major accomplishment with the ICA was a conference she hosted at DePaul University in 1994. Her major goal working with the ICA has been to increase its diversity of performers.

When hosting the conference, DeRoche reached out to musicians from all around the world — to emphasize the “international” in International Clarinet Association — resulting in performing musicians from Germany, Austria, Belgium, Japan, Canada and countries in South America. DeRoche also focused on diversifying the performances by music genre, including jazz and folk music.

The 1994 ICA conference also got an unexpected guest performer — a Chicago janitor, originally from Romania, who spoke no English. His daughter reached out to DeRoche, translating for her father, asking if he and his group could play at the conference. “He played the most intricate music with this folk group — wild music in mixed meters,” she says. “People were amazed by him.”

From 2000 to 2002, DeRoche became the ICA’s first female president. Because of this distinction, DeRoche feels a responsibility to empower young female musicians. “When I was young, there were very few female role models, and at the time it seemed you had to be masculine to achieve success,” she says. “Times have changed. I always [make] a point of being myself, wearing jewelry, clothes I like, painting my nails, not feeling like I had to be someone other than who I am. I hope this message is true for everyone now! Just be [a] good [musician] and be yourself. It can’t be one or the other; it has to be both.”

In her current role as chair of the Department of Music Performance at DePaul, DeRoche spends half her time on administrative duties and continues to teach clarinet students in a one-on-one setting. “The students that come are quite serious about having the life [of an] orchestral player [or] playing in an opera, musical or military band,” she says. “That’s work. That’s [going] from doing 80 percent and being satisfied to doing 110 percent and being successful and happy.”

DeRoche helps her students achieve this 110-percent level of effort by setting high expectations for them and not resting until they meet those expectations. “I say, ‘Sorry, I know you want to stop playing scales and go on to Weber 2nd Concerto, but we can’t,'” she says. “I just keep pushing them, and then they say, ‘I didn’t think I could do that!'”

Students appreciate DeRoche’s disciplined approach. “I always felt like she pushed me in the [way] that I wanted to get better,” says Audrey Denny, one of DeRoche’s former students, who now works as a clarinet specialist at Clarinetquest, part of a retail shop in St. Louis.

Though DeRoche pushes her students hard, accepting no excuses or shortcuts, her teaching style never lacks empathy. “As a teacher, she was interested not only in me as a clarinetist but also in me as a person,” says former student Tim Zavadil, who now teaches clarinet at the University of Minnesota and plays clarinet and bass clarinet in the Minnesota Orchestra. “We discussed how to be a better person, a better communicator, a better friend.”

As an educator, DeRoche’s overall philosophy is to give students the tools they need to help themselves be successful. “We have that responsibility to teach really good quality technique and to open their eyes to why they’re doing this — to create a higher level artistic product,” she says. “I want my students to feel like I’m helping them succeed.”

This article originally appeared in the 2018 V1 issue of Yamaha SupportED. To see more back issues, find out about Yamaha resources for music educators, or sign up to be notified when the next issue is available, click here.