In previous installments of this series of articles about the components of modern drum sets, we traced the origins of snare and bass drums and learned how they became an important part of contemporary music. In this installment, we’ll take a look at the tom, which was initially regarded as a sound effect, but is now an essential component of every drum set.

Originally known as a tom-tom, the tom is a simple drum that doesn’t require extra mechanisms such as a snare strainer (“throw-off”) or foot pedal. Most drum sets have a maximum of one snare drum and one bass drum (sometimes two), but there can be any number of toms of assorted sizes. Toms can be used for playing fills, adding color, or even as a substitute for cymbals.

The earliest toms go back to Asia in the later part of the 1800s, when drums known as “Chinese tom-toms” were made from simple wood shells. Diameters ranged from about 8 to 14 inches, with depths of only a few inches. These drums could not be tuned because there were no hoops or tuning rods; the skins (which were often painted with elaborate decorations) were simply tacked to the top and bottom of the shell.

As the modern drum set began to take form in the early 1900s, American drum manufacturers imported these toms, put their own logos on them, and offered them as part of their drum sets. Sometimes the toms were mounted to the bass drum hoop, and sometimes they were simply set on a “trap table” (a table upon which were placed various percussion effects). Larger toms were supported using tripod stands. It wasn’t until 1940 that tripods were replaced with straight, adjustable, metal legs attached to the shell. Toms with that kind of mounting were called “floor” toms.

In the 1920s, drummers began using deeper toms often mounted on bass drum “consoles” (rails), and those drums featured an exterior finish that often matched that of the snare and bass drum. By that time, the top heads could be tuned, but the bottom heads were still tacked on and could not be tuned. This was a big problem because the heads were made from calf or animal skin and were highly susceptible to changes in temperature and humidity. It wasn’t until the late 1950s that plastic drum heads (made of mylar, polyester, or a mix of the two) became available. This was a major breakthrough because plastic heads hold their tuning even when temperature and humidity change.

Legendary drummer Gene Krupa worked with drum manufacturers in the 1930s to develop the tom as we know it today. Krupa insisted that the top and bottom heads for his toms must be tunable. These revolutionary toms used metal hoops to hold the heads, along with tension rods (adjustable with a drum key) for tuning. Who could argue with Krupa? His drumming on Benny Goodman’s 1936 hit “Sing, Sing, Sing” includes what is still one of the most famous tom riffs in music history. Krupa also helped establish some of the now-standard tom sizes such as 13″ x 9″ and 16″ x 16″ (diameter x depth).

During the late 1950s and early 1960s, tom mounting systems evolved from the rail to the sturdy tube-type systems we see today. As rock music became popular, drum sets tended to get larger, with some drummers using sets that included four or more toms of assorted sizes. Toms can be mounted on the bass drum, on floor stands, or — as is the case with floor toms — on legs with brackets that attach to the shell. They can also be mounted on racks such as the Yamaha Hexrack II. These not only make setup faster and easier, they also reduce the footprint of the drum set, as compared with using separate stands. Another benefit of using a rack is that some drummers prefer the sound of the bass drum when toms are not mounted directly to it.

Today, the standard diameters for “rack” (i.e., mounted toms) are 8, 10, 12, 13 and 14 inches, while floor toms are usually manufactured with 14, 16 and 18-inch diameters. Shell depths can vary too: Standard depths are 8, 10, 13 and 16 inches. Yamaha Absolute Hybrid Maple mounted toms are available in traditional diameters, but can be ordered with slightly different depths. 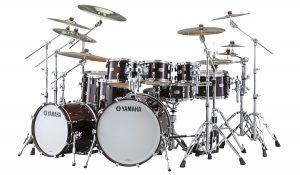 There are other types of toms available, such as roto toms (which have a single tunable head in a metal frame without any shell) and extra-loud concert toms, which have extra deep shells and no bottom head. These are designed specifically to project through the sound of a full orchestra and are generally not recommended for use in drum sets, though they were employed by some rock drummers in the ’70s and ’80s.

Tom shells can be constructed from fiberglass, acrylic and occasionally stainless steel, but wood is by far the most popular material. Wood shells are usually made from multiple plies of wood such as oak, birch or maple.

Oak is used in Yamaha Live Custom Hybrid Oak toms. This type of wood produces plenty of volume and projection and is known for its round tone, mellow highs and a warm low end. Made from a sandwich of oak plies surrounding a dense phenolic layer, the design of Live Custom Hybrid Oak shells emphasize attack while increasing the drum’s dynamic range.

Yamaha Recording Custom and Stage Custom Birch toms are manufactured from birch wood. Birch projects exceptionally well, which helps the sound of the drum cut through the mix. It produces a bright, lively tonality with an emphasis in the low and high frequencies, and slightly reduced mid frequencies.

Maple is one of the most popular woods for making drum shells and is used in Yamaha Absolute Hybrid Maple and Tour Custom toms. Maple shells offer a warm low end, slightly boosted mid frequencies and balanced low and high frequencies. Absolute Hybrid Maple shells combine maple plies with an interior layer of wenge — a hard and heavy wood which combines with the maple to produce a rich, clear tone at a wide variety of volume levels. Yamaha PHX (pronounced “phoenix”) drum shells are built from plies of jatoba, kapur and North American maple woods. This unique structure maximizes performance and increases the vibration of the drum head.

Toms are designed to resonate, but sometimes hardware attached to the shell can dampen that resonance. The Y.E.S.S. (Yamaha Enhanced Sustain System) I, II and III tom mounts featured on all Yamaha drum sets (with the exception of Stage Custom Hip and Rydeen models) acts as a shock mount system and minimizes contact between the shell and the mount, allowing the shell maximum vibration — hence, maximum resonance. Lugs can also decrease shell resonance and that’s why the Absolute lugs featured on Yamaha Tour Custom toms are isolated from the shell with rubber gaskets.

A different approach is taken on Yamaha PHX toms, which use a hook lug system. These lugs are mounted on an area of the shell that produces undesirable overtones and then mutes those tones, allowing for a pure fundamental tone. The hook lug system also makes head changes fast and easy.

Toms provide a wide range of tonal options for your drum set and can also make it more fun to play. Best of all, you can start with just one or two toms and add more when you’re ready to expand your sonic palette!