In this multi-part series, we take a closeup look at each of the components of the modern drum set.

The modern drum set is made up of a variety of components, including snare drum, bass drum (sometimes called “kick” drum), toms and cymbals. The snare drum is unique among the drums because it is the only one that has a set of snares stretched across the bottom head — finely coiled wires or springs that vibrate against the bottom head when the drum is hit, giving the snare drum its characteristic “snap” or “sizzle.”

Snares are fine wires stretched across the bottom head of a snare drum.

Snare drums are used in popular music as well as in jazz and classical music. Along with the kick drum, the snare drum is the most important component in a drum set. In contemporary music, it provides the all-important “backbeat” on the two and four of a measure, while the kick drum typically plays on the one and three.

It’s hard to imagine music without snare drums, but did you know that its origin can be traced all the way back to the 1300s?  In those days, a drum known as the tabor — a double-headed wood drum with one or more snares stretched across the bottom head — was used by drum corps for communication purposes.

At around the same time, Swiss drum and fife corps were using the Basel drum, predecessor to the field drum, which made its way from Europe to North America in the 1600s. Soon after that, the snare drum debuted in concert halls. Brass shells started to appear in the mid-18th century, and the 1800s brought significant developments in construction, such as single-ply shells and wood hoops.

The snare strainer (also called a “throw-off”) arrived in the late 1800s/early 1900s; this allowed the snares to be quickly engaged or disengaged. Innovations that followed include flanged metal hoops, welded brass shells, and self-aligning lugs that made tensioning easier while reducing the possibility of stripped threads. Throughout the late 1900s and 2000s, the variety of materials used in the construction of snare drum shells broadened to include exotic woods and metals.

These days, snare drums are available in a mind-boggling assortment of sizes and materials.

The traditional diameter for a snare drum is 14 inches, but you’ll find models with diameters of 12, 13 and 15 inches too, in depths ranging from 3.5 to 8 inches. As head size increases you’ll get a lower pitch with the same tension on the drum head. Generally, the deeper the shell and the larger the diameter, the lower the fundamental pitch of the drum.

The thickness of a shell also affects a drum’s fundamental pitch, with thinner shells typically producing lower fundamentals (there are exceptions). Drums with lower pitch are usually louder and capable of greater projection. That may be why some drummers even add snares to floor toms!

Are You a Metalhead?

Snare drum shells are available in both wood and metal. The three most popular metals are aluminum, steel and brass. Aluminum, used in Yamaha Recording Custom Aluminum snare drums, is the lightest of the these metals. It produces a dry, bright sound with a crisp response and a short sustain that may not need damping. Aluminum is durable and resistant to corrosion so it requires little maintenance.

Steel is heavier and has a more aggressive attack than aluminum. It accentuates the mid and high frequencies and produces more resonance (and ring) than aluminum, so you may need to apply damping. Steel shells like those used in Yamaha Recording Custom Stainless Steel and Stage Custom Steel snares are generally louder than brass or aluminum.

Brass snare drums such as Yamaha Recording Custom Brass snares have a dry, articulate sound that’s darker than steel or aluminum, somewhere in-between metal and wood. It’s the most responsive metal for a snare drum shell, producing a rich, warm tone with a sharp crack, dark overtones and more low end than other metals. It’s more resonant than aluminum and often needs damping. Brass snare shells may have a lacquer coating to prevent corrosion.

Other metals used for snare drum shells include bronze and copper. A bronze shell will be loud and crisp with a dark tone and a low fundamental note, while copper has a tone between metal and wood, with a pronounced low end. It’s a relatively soft metal, so care should be taken with those kinds of snare drums during setup and transport to prevent damage.

Any of these metals can be either cast or spun into shells. Cast shells tend to be louder and have a higher fundamental pitch with longer sustain, while spun shells are thinner, have a larger tuning range and often have a center bead for added strength. 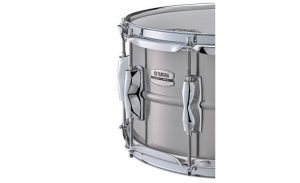 Wood shells are usually made from multiple thin layers of wood called “plies.” These plies are glued together and arranged with alternating grain to add thickness, stability and strength. Wood shells can also be made from a single steam-bent piece of solid wood, or from blocks of wood glued together. In general, thicker wood shells have greater projection and volume, but thinner shells are more resonant.

Birch is used to make the shells in Yamaha Recording Custom snares. This type of wood emphasizes the low and high frequencies, giving a bright, lively sound with slightly reduced mid frequencies. Birch also projects very well and can easily cut through a mix.

Oak produces a round tone, mellow highs, and an extended, warm low end with plenty of volume and projection. Yamaha Live Custom Hybrid Oak snare drums are made from a sandwich of oak plies surrounding a dense phenolic layer — a design that emphasizes attack while increasing the drum’s dynamic range.

Other woods used to manufacture snare drum shells include beech, mahogany, and poplar. Beech is similar to birch but has a warmer tone with boosted lows and mids relative to the high frequencies. Mahogany has a mellow high end, reduced but resonant mids, robust lows, and projects less than birch. Snare shells can also be constructed from plies of different wood. Poplar is a relatively soft wood often used in a sandwich between layers of mahogany, resulting in a vintage drum sound with a full, rich timbre.

Yamaha Absolute snare drums have a core ply of wenge (a very hard and heavy wood) sandwiched between plies of maple, known for its clear tone.

Yamaha Absolute Hybrid shells are constructed from plies of wenge and maple.

Though far less popular than wood and metal, snare drum shells can also be made from synthetic materials such as carbon fiber, acrylic or fiberglass. Acrylic shells have a warm high end and plenty of presence. Fiberglass has an even balance of low, mid and high frequencies with excellent projection. Carbon fiber makes for a very strong shell with a good balance between mids and highs, and a slight emphasis in the low end.

Choosing any drum is a very personal choice, and there’s no one “perfect” snare drum for every purpose, which is why many drummers own several of them. But do some listening and auditioning at your local music dealer, and you’ll find one that’s right for you.

Yamaha snare drums are available in a variety of sizes and shell materials so you can create your own signature sound for any style of music. Here’s a video that lets you compare the sound of many of them:

Speeding Up by Slowing Down
The Sound of College Bowl Games