Surrealist artist Salvador Dali once said, “Have no fear of perfection. You’ll never reach it.”

When Yamaha product manager Susumu Kumazawa was tasked with designing the two-channel Yamaha Flagship Hi-Fi 5000 Series, he began with the intent of aiming for perfection. What he soon discovered would change his own definition of what perfection was.

The “perfect” audio system is mostly subjective and is largely based on the individual taste of the listener and the type of music being listened to. That said, there are a number of key factors that must be taken into consideration when creating any Hi-Fi audio system: clarity, timbre, dynamics, definition, range and envelopment. From the electrical design to the aesthetic to the final sound quality, each element of an audio system must be scrutinized over and over until the direction is clear — not to mention the need to differentiate the system from those being offered by competitors. But sometimes you have to look beyond perfection to achieve your goal.

In this fourth and final installment of the Ultra Hi-Fi blog series of articles, we’ll explore the process that Kumazawa and the engineering team followed from concept to design to final product to create the Flagship Hi-Fi 5000 Series.

The Price of Perfection 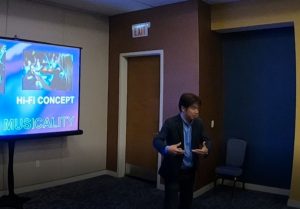 One of the key concepts Kumazawa knew the system had to deliver was True Sound — the idea that there should be no barrier between the listener and the music, and that the listener should be able to hear the music just as the artist intended. To achieve this, he felt that he had to first identify his own personal connection to music. Accordingly, he turned his ear to the past and tapped into his own personal nostalgia.

In 2006, Yamaha introduced the A-S2000 amplifier and CD-S2000 CD player — products managed by Kumazawa, who took them to Europe as part of the official launch. However, the fruits of his labors did not meet with unqualified approval. “Some European reviewers said, “Your sound is perfect. But it’s not enjoyable. It doesn’t have musicality,”” Kumazawa recalls.

“Before I was an engineer, when I was a student, I loved music,” he continues. “[The philosophy was] “no music, no life.” I struggled with how to express enjoyment in music through products. But I’m an engineer, so I tried with technology to express musicality. So, before I design equipment, the concept is very, very important.”

To better understand how people get enjoyment from listening to music, he spoke with the chief Yamaha piano designer about sound and music from their respective viewpoints. “He said something interesting about openness,” Kumazawa remembers. “If there is a classical pianist playing in a huge concert hall, and you’re sitting at the top row of the hall, you should be able to hear them play pianissimo [very softly] but still have the sound reach you perfectly.” This sense of openness would become one of three keystone ideas that Kumazawa would use to craft his audio goals with the 5000 Series, the other two being emotional connection and groove. He became convinced that the design had to feel special to the end user in the same way playing a musical instrument does when someone plays it. “Since we make musical instruments, touch is very important. This is why our products need to have a tangible interface,” he says. Once those concepts were in place, he was able to determine the necessary design elements. The C-5000 preamplifier and M-5000 amplifier, for example, offer a sense of rhythm with their physical design. The physical embodiment of music is represented by the vents on the top of each unit, which are similar to the lines of a stave in sheet music.

When it came time to fabricate the actual components, it took 19 engineers in total, working closely with the Yamaha Research & Development and Production teams to create the four 5000 Series products. There were several challenges that the engineers faced. One of the most daunting involved the construction of the left and right PCBs (Printed Circuit Boards) in the C-5000 preamp. In the early phase of development, the audio was not representing the soundstage correctly. The team made a breakthrough by unifying the two sides mechanically. This further emphasized the impact componentry can have on sound quality. “If you change the material of the circuit board, the sound changes,” Kumazawa explains. “Any part that is changed alters the sound.”

From initial concept to finished product, it took eight years to complete the NS-5000 speakers, three years for the C-5000 and M-5000, and five years for the GT-5000. And in order to showcase the uniqueness of the concept, no other Hi-Fi components were used as a comparison when building these products.

“Technically, we accomplished a perfect balanced audio transmission circuit, from cartridge to speaker output,” Kumazawa says proudly, “and our being part of a music company is clearly expressed by our system as a whole. Our motivation is that music should be expressed with more musicality. [This is why] we will keep challenging [ourselves].”

If you missed any of the previous articles in our Ultra Hi-Fi Series, here they are:

Part 1: The Difference a Tonearm Makes

Part 2: The Difference Made by Speaker Driver Materials

Part 3: The Difference Made by a Balanced Signal Path