‘Tis the season when the bells are a-jingling, the herald angels a-singing and the drummer boys a-drumming.

Some of us have more tolerance for holiday music than others (personally, I tend to start getting a little weary of it somewhere between Black Friday and Cyber Monday) but there’s no question that the songs that dominate the airwaves, shopping malls and elevators this time of year carry a certain spirit all their own — a spirit that evokes feelings of love, peace and goodwill towards our fellow man.

What is it that puts the “holiday” in holiday music, anyway? It turns out that there are several factors — some that are glaringly obvious and others that are quite thought-provoking.

1. Holiday music makes us feel good. Like other sensory experiences, music has a powerful effect on our subconscious, to the extent that it can actually change our mood. When we hear music we like, we feel good. The same is true if we hear music that triggers warm memories such as past holidays with family and loved ones. (Psychologists call this the “reminiscence bump.”)

2. They’re just plain great songs. The mainstays of holiday music all have one important thing in common: They’re well-crafted songs. Usually written in a feel-good major key with clever lyrics that deliver positive, uplifting messages and/or paint pictures of an idealized time gone by, they tend to consist of simple melodies and chords that lend a sense of familiarity before throwing you a surprise once in awhile — the ideal recipe for a song that sticks in your head year after year.

And now for the perhaps not-so-obvious:

1. Their instrumentation. Holiday songs unashamedly incorporate elements like church bells, trumpet fanfares and dramatic orchestral strings to remind you of hymns and religious settings. In addition, they often feature high-pitched instruments like sleigh bells and glockenspiel that conjure up images of falling snow and children’s toys. Subtle? No. Effective? Definitely.

2. Their versatility. Most popular holiday songs lend themselves to a wide variety of arrangements and can easily be played by anything from a full orchestra to a marching band to a small jazz ensemble to a group of carolers. As David Ludwig, dean of artistic programs at the Philadelphia-based Curtis Institute of Music points out, “a lot of these songs have existed for hundreds and hundreds of years and have survived the test of time precisely because they’re so singable, they’re so accessible, they’re so flexible.”

3. The weather outside is frightful. “When it’s most cold out and the bleakest, is sometimes the time when people want to celebrate the most,” Ludwig adds. “[That’s when they] want the most warmth and sense of community with each other.” In other words, when it’s time to cuddle and huddle, that’s when we’re most receptive to songs that emphasize affection and human connection — the very definition of holiday music. 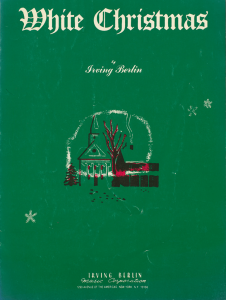 “White Christmas,” written in 1942, is the best-selling song of all time.

By the way, in case you think that all “traditional” holiday songs are centuries old, think again: With some notable exceptions (such as “Silent Night” and “Jingle Bells”), many of the secular ones were actually written in the first half of the 20th century. That’s why their musical characteristics (i.e., solo vocals sung over lush orchestral instrumentation) reflect those of the American popular music of that era. The rise of rock’n’roll in the 1950s ushered in a new generation of holiday songs such as “Jingle Bell Rock” and Elvis’s perennial “Blue Christmas,” but there have been relatively few memorable holiday songs written since then, apart from Bing Crosby’s improbable 1963 hit “Do You Hear What I Hear?” (actually written as a protest song in the midst of the Cuban missile crisis) and José Feliciano’s heartfelt “Feliz Navidad,” written and released in 1970.

Why is that the case? Hard to say, but perhaps it’s a simple as the fact that it takes a generation or more for a song to become so imbued in our subconscious that we consider it a “classic.” Or — and I hate to say it — maybe it’s because the holiday spirit has eroded in recent years due to factors like over-commercialization and “Christmas creep,” where the sound of sleigh bells begins wafting from the speakers in overzealous stores eager to rake in the gift dollars even as the summer sun is blazing outside.

All food for thought — like gingerbread cookies and candy canes. Me, I’m off to deck my halls with boughs of holly. Happy holidays, everyone!

What Is an IPX Rating and What Does it Mean for Headphones?
Meet the French Horn