In previous installments of this series of articles on The Modern Drum Set, we discussed the snare drum, bass drum, toms and foot pedals. In this, our last installment, we take a look at the metal of the drum set: cymbals and hardware.

Cymbals are some of the oldest known percussion instruments, dating back to the Bronze Age (around 3000 to 4000 B.C.) and originating in Central Asia. They made their way to Europe in the Middle Ages, and in the late 1700s, were used in orchestral works. All these years later, a cymbal is still essentially the same thing: a bronze or brass disc with a hole in the center.

Small cymbals, 10 to 12 inches in diameter, became a part of the drum set during the early 1900s; known as “sock” cymbals (the predecessor to the hi-hat), they were used mostly for special effects — often, songs ended with the drummer delivering a sharp smack on one. In the mid-1940s, bebop drummer Kenny Clarke switched his cross-rhythms from the hi-hat to a larger cymbal that we now call the “ride” cymbal. By the early 1950s, cymbals were available in diameters up to 26 inches, with thicknesses ranging from paper-thin to heavy. At the same time, hi-hat cymbals grew to diameters of 13 to 15 inches.

When rock music emerged in the mid-1960s, rock drummers initially used the same cymbals that were produced for jazz, even though those cymbals weren’t intended for this new style of hard playing. Manufacturers responded with cymbals that were louder, heavier and larger than their predecessors, and the assortment of cymbals available today is mind-boggling.

The three main types of cymbals are ride, crash and hi-hat. Ride cymbals range in diameter from 18 to 24 inches, while crash cymbal sizes run from 14 to 22 inches. Hi-hats vary in size from 12 to 16 inches, with 13 and 14 inches being the most popular. There are also a wide range of “special effect” splash, China, trash and stacked cymbals.

The one thing they all have in common is that they need hardware for support.

My Arms Are Tired

When the drum set was developing in the early 1900s, cymbals were usually supported by L-shaped arms attached to the bass drum, but there were problems with this type of mounting system. For instance, the range of height and adjustment angles were limited, plus there were only so many cymbals that a bass drum could support.

Cymbal stands started to appear in the 1920s, and initially, they were lightweight devices, adequate for casual playing. But as jazz and swing became popular and drummers played harder and louder, it became apparent that these stands weren’t up to the task. Manufacturers began building heavier bases and adding support struts — though even that couldn’t prepare them for the beating that Who drummer, Keith Moon, would unleash on his drum sets in the mid-to-late 1960s.

Modern drum hardware comes in a wide variety of weights and configurations appropriate for any style of playing. Single-braced legs used in Yamaha HW-3 Crosstown, HW-680, and HW-780 hardware are durable, lightweight and provide stable support for all sizes and weights of cymbals and snare drums — plus they’re easy to transport at the end of a long gig!

If you’re an aggressive player, or if your taste leans toward large and heavy cymbals, you may need the extra support of double-braced legs like those found on Yamaha HW-680W or HW-880 Series stands. Cymbal stands come in two basic types: straight and boom. Smaller setups can usually accommodate straight stands, but as you add more drums and cymbals, boom stands become useful because they can reach locations that a straight stand can’t. Some cymbal stands are convertible and can be configured as either boom or straight stands. For example, the boom on Yamaha CS-665A and CS-655A cymbal stands can be telescoped into the top tube, turning them into straight stands and making them easier to pack. If you need a weighted boom for supporting heavy cymbals, the Yamaha CS-BW can be integrated with Yamaha CS-755, CS-865 and CS-965 stands. The CS-755 even has a retracting hideaway boom arm — a feature first developed by Yamaha.

Features to look for when choosing a cymbal stand include non-slip rubber feet, a plastic cymbal seat that reduces noise by preventing metal-on-metal contact and plastic plugs in the vertical tubes to prevent rattling. In addition, an infinite adjustment tilter like the one found on the Yamaha CS-850, CS-865 and CS-965 models allow virtually any angle, so you can place your cymbals exactly where you want them. 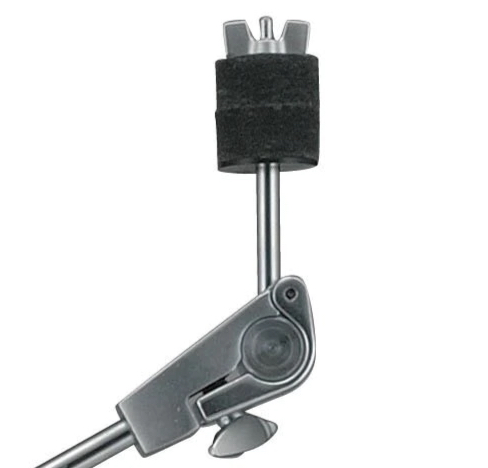 Flexibility is also important. For example, an attachment clamp such as the Yamaha CSAT-924A can be used to add a Yamaha CH-755 cymbal holder to any existing stand, while the Yamaha CSAT-940 allows a pair of closed hi-hat cymbals to be added.

As we discussed in Part 2 of this series, toms can be mounted using a bracket on the bass drum. Many drummers, however, prefer to get their toms off the bass drum for versatile positioning and to ensure that the bass drum has maximum resonance. One way to do that is by using a tom stand. Yamaha offers a variety of single and double tom models. The WS-860A features double-braced legs for stability and a ball clamp system that rotates 360 degrees, so you can easily position two toms (or one tom and an additional snare drum) wherever you like. 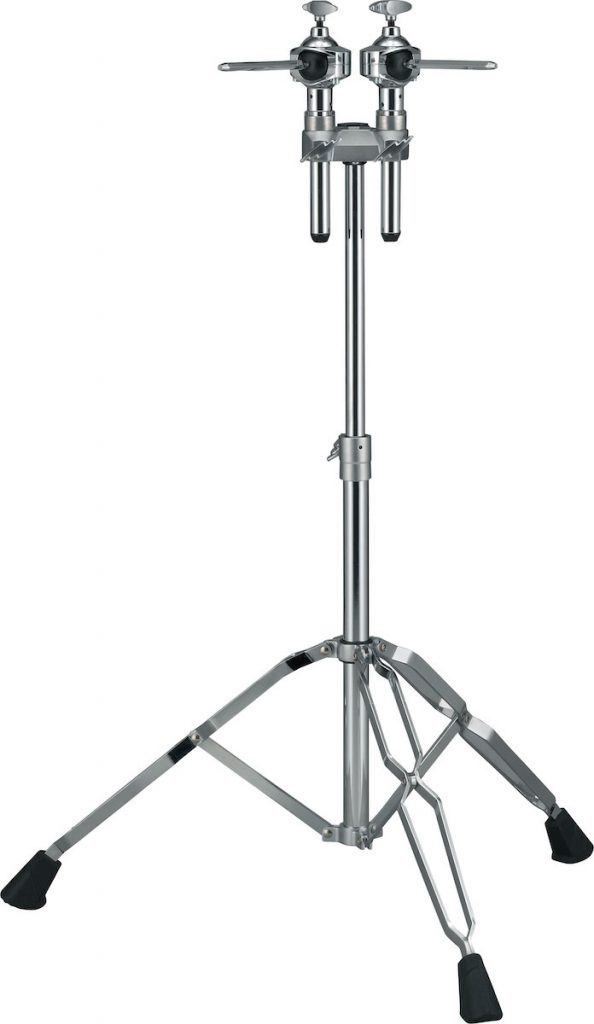 Toms, as well as cymbals, can also be supported using a rack. Drum racks have been around almost as long as the modern drum set; initially they were used for holding cymbals and cowbells. They lost popularity in the mid-1900s, but came back in a big way (figuratively and literally) during the mid-1980s when a drummer’s kit was almost as big as their hair!

A basic rack consists of two legs and a horizontal pipe — a configuration that easily supports two toms and two cymbals while taking up less space than individual stands, and getting rid of the clutter and extra weight. The Yamaha Hexrack II is an example of a modular rack system that can be expanded if necessary by adding pipes and legs. The Hexrack II employs a unique cross-section that prevents twisting or slipping and utilizes the same pipe diameter for both tom and cymbal holders, so a Yamaha HXTCII Tom Clamp can accept either one, as well as a tension- and angle-adjustable Yamaha CHH-930 closed hi-hat holder. 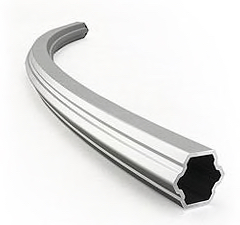 Creating a rack requires a bit of planning, but once you’ve designed it, your setup will be repeatable and easier to build than if you used individual stands. (Check out this video to explore the limitless possibilities the Hexrack II has to offer!) 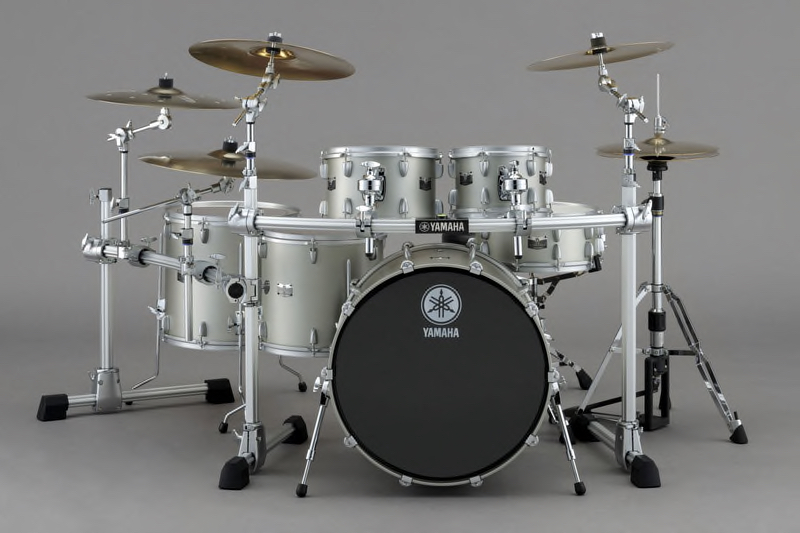 The Yamaha Hexrack II is a sturdy and versatile mounting system.

The snare drum is probably the drum you play most, so keeping it stable and secure is a must.
Features to look for in a snare stand include a compact yet sturdy base, non-slip feet and a basket that securely clamps snare drums of different diameters. It’s also important to make sure the stand can position deep drums low enough, so the top head is at a comfortable playing height. The Yamaha SS-950 snare drum stand has a basket design that enables it to sit two inches lower than previous models, so you won’t have any trouble with an 8-inch deep snare drum. The SS-950 also has double-braced legs and a centered ball-and-socket tilter that stays put under heavy playing and allows wide ranges of adjustment. The rubber feet on the Yamaha SS-950 snare drum stand have adjustable spikes to prevent movement.

Best Seat in the House

The drum “throne” (the seat you sit upon, as is befitting a king) is a very important component in your drum set for one simple reason: If you’re not comfortable, you won’t have any fun playing. Thrones come in three basic varieties: round, bicycle-style and bench seats. Picking the right one is a very personal decision, so try all of them to see which one is right for you!

Regardless of which style you choose, make sure there’s plenty of padding for comfort during long gigs. Seat height is usually adjusted via a smooth or threaded rod like the one used on the Yamaha DS-840 round throne. A wide base prevents the seat from rocking back and forth, and a memory clamp allows for repeatability, while also serving as a safety feature. 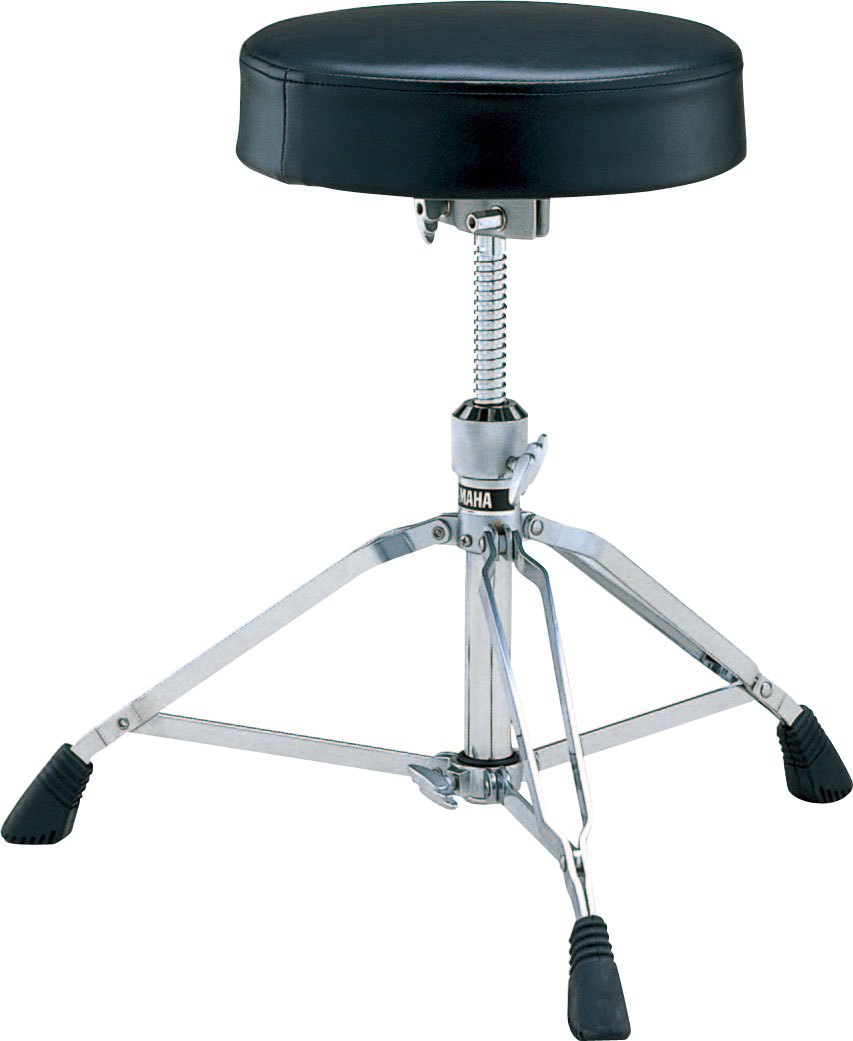 Drum hardware is what makes a drum set uniquely yours. If chosen carefully, it will support your drums and cymbals safely for many years to come.

Check out the other installments in this series:

Apps to Help You Learn to Play Keyboard At Home
Guide to Brass Mouthpieces – Part 4: Weights and Finishes