You may have noticed that, alongside the usual audio input and output connectors, some of your digital audio gear has ports that look like large phone jacks. These are network ports, and they enable a variety of devices to be interconnected and share audio.

Audinate’s Dante® has become the most common protocol for digital audio networking, and you’ll find it in a variety of audio devices, including many Yamaha digital mixers, processors, power amplifiers and even speakers. Dante is now being used not just in large-scale installations and tours but also in small PA systems, making it one of the most exciting new developments in live sound.

Let’s find out what the fuss is all about.

Can We Borrow Your Cable?

Dante employs common Ethernet technology borrowed from the computer industry to transmit digital audio, but it’s important to know that Dante is not the same as Ethernet. That said, there are many similarities. For one thing, Dante connectors look like Ethernet connectors and use the same type of cable (CAT5e or CAT6). In addition, standard off-the-shelf network switches (sometimes called hubs) are used to create a Dante network, so you don’t need to purchase proprietary network hardware. (See the Audinate website for a list of recommended network switches; Yamaha offers several network switches as well.) 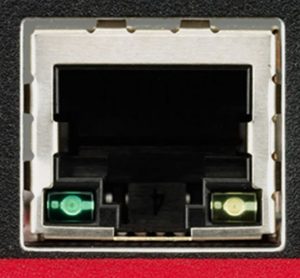 A single CAT5e/6 cable can carry hundreds of channels of digital audio, whereas analog audio requires one cable per audio channel. CAT5e/6 cable is inexpensive and light so it’s easy to carry a spare; in contrast, analog copper snakes are heavy, expensive, and difficult to wrangle during setup and teardown. And if a CAT5e/6 cable becomes damaged, you might even have a shot at finding a last-minute replacement at an office supply store. (Try that with an analog snake!)

Last but certainly not least, you’ll never worry about the gender of the connector at the end of the cable the way you do when dealing with analog audio. That’s because CAT5e/6 cables always have male connectors at both ends, with the direction of the signal determined by the software. Cable lengths of up to 300 feet are safe for reliable operation in Dante networks

When used with Gigabit Ethernet hardware (that is, hardware that supports a maximum data rate of one gigabit per second), Dante is capable of routing up to 512 channels of inputs and outputs at resolutions from 48 kHz/24-bit up to 192 kHz/32-bit. (Higher sample rates and bit depths will result in reduced channel count.) Multitrack recording is supported, too. With the use of an Audinate Dante Virtual Soundcard (which plugs into your computer’s Ethernet port), your DAW software will recognize a Dante network as a sound card. Alternatively, you can use a Yamaha AIC128-D Accelerator Card, which can be installed into any available PCI Express slot in your Mac® or Windows® computer.

The simplest Dante network requires two Dante-enabled audio devices, a network switch, and a computer with an Ethernet port. The computer also needs to be running Audinate’s Dante Controller software (which runs on PC or Mac platforms and is available free of charge) in order to configure the network. If you are not using your computer for recording, you can disconnect it after you have set up the network. Note that Dante does not operate via Wi-Fi because Wi-Fi isn’t fast enough for reliable transport of digital audio.

Dante-enabled devices have at least one Dante port, known as the primary port. (Some devices may also have a secondary port for redundancy in critical applications.) Many Yamaha audio products, such as the DZR/DXS Series of powered loudspeakers, already have built-in Dante ports, while other Yamaha devices have a rear-panel slot to accept a Dante expansion card. For example, the Yamaha NY64-D Audio Interface Card can be installed in any Yamaha TF Series digital mixer, and the Yamaha DANTE-MY16-AUD2 card can be installed in selected Yamaha mixers, processors or power amplifiers, making them Dante-capable: 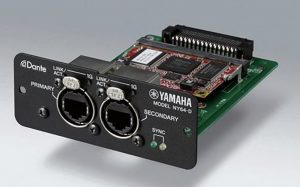 To create a Dante network, first turn all your audio equipment off, including your computer. Connect a CAT5e/6 cable from the primary Dante port on each device to any port on a Gigabit network switch such as the Yamaha SWP1-16MMF. Also connect a CAT5e/6 cable from your computer to the SWP1-16MMF (again, with the computer turned off). When you power up the devices they will automatically “discover” each other and you’ll be able to patch audio between them using the Dante Controller software: Even after the networked devices are turned off or disconnected, the connections are remembered. When you reassemble or power up your system again, all of your previous connections will be made automatically.

Can You Do A Split?

One of the really cool features of Dante is that it can split an output signal without the need for additional hardware. Let’s suppose you are doing sound in a large ballroom and need to have a series of speakers placed around the room so that everyone in the audience can hear the artist. Dante Controller allows you to split the main outputs from the mixer to the inputs of multiple sets of powered speakers. And, because Dante is routing digital data and not analog audio, you don’t have to worry about the signal degradation that occurs when you split an analog audio signal: Larger music productions often require one mixer for front-of-house and another for the monitor mixes. The network switch that connects the consoles on a Dante network makes an analog snake/splitter unnecessary. You can connect microphones and DIs into one of the consoles, and Dante will allow you to digitally distribute these signals to the other console via the network: As you can see, Dante is a very powerful tool that can be used to create audio networks ranging in size from small club venues to massive systems requiring hundreds of channels. By using Dante-enabled digital audio products, you can easily create a network that works for your particular application.

Want to become a Dante expert? Audinate offers a number of online and live training programs, as well as video tutorials. Click here for more information.