Earlier this year, the Cincinnati Symphony Orchestra (CSO) performed “Rhapsody in Blue,” featuring its composer, George Gershwin on piano … despite the fact that Gershwin has been dead for 82 years.

This is no ghost story. Rather, it’s a tale of technology. 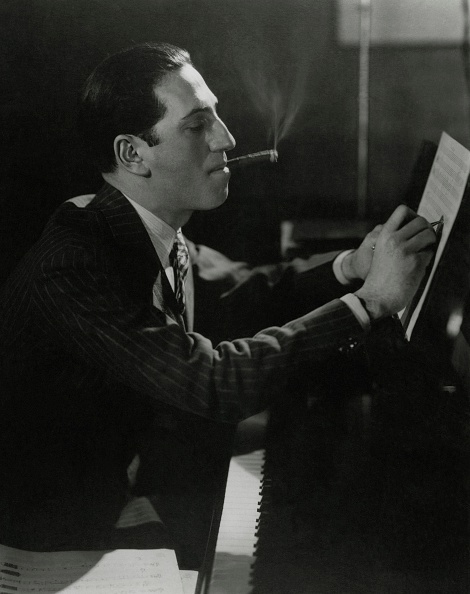 Gershwin’s piano part had actually been recorded in 1924 on piano rolls for the then-popular Duo-Art reproducing piano. In 2013, his performance was converted to MIDI data, and at the CSO concert, it was played by a modern state-of-the-art Yamaha Disklavier reproducing piano.

It sounds relatively simple, but in fact it was extremely challenging and labor-intensive to reproduce Gershwin’s part accurately and to make it possible for the conductor, Louis Langrée, and the orchestra to follow along with it. Here’s the story behind this groundbreaking performance.

When the Cincinnati concerts were in the planning stage, CSO production manager Alex Magg needed to find someone to handle the demanding technical challenges of the project. He reached out to Australian pianist and electronic engineer Peter Phillips, a leading expert on working with piano rolls and reproducing pianos, and someone with considerable experience combining replicated piano performances with live orchestras.

Another advantage to having Phillips on board was that he had already done the painstaking work of translating the original “Rhapsody in Blue” piano rolls to MIDI (the modern digital data format), using a “roll reader” device he had built by hand. The digitized results had previously been employed for a couple of other Gershwin-with-orchestra projects, one at Stanford University — which housed the original Gershwin piano rolls — and the other with the Sydney Symphony Orchestra. 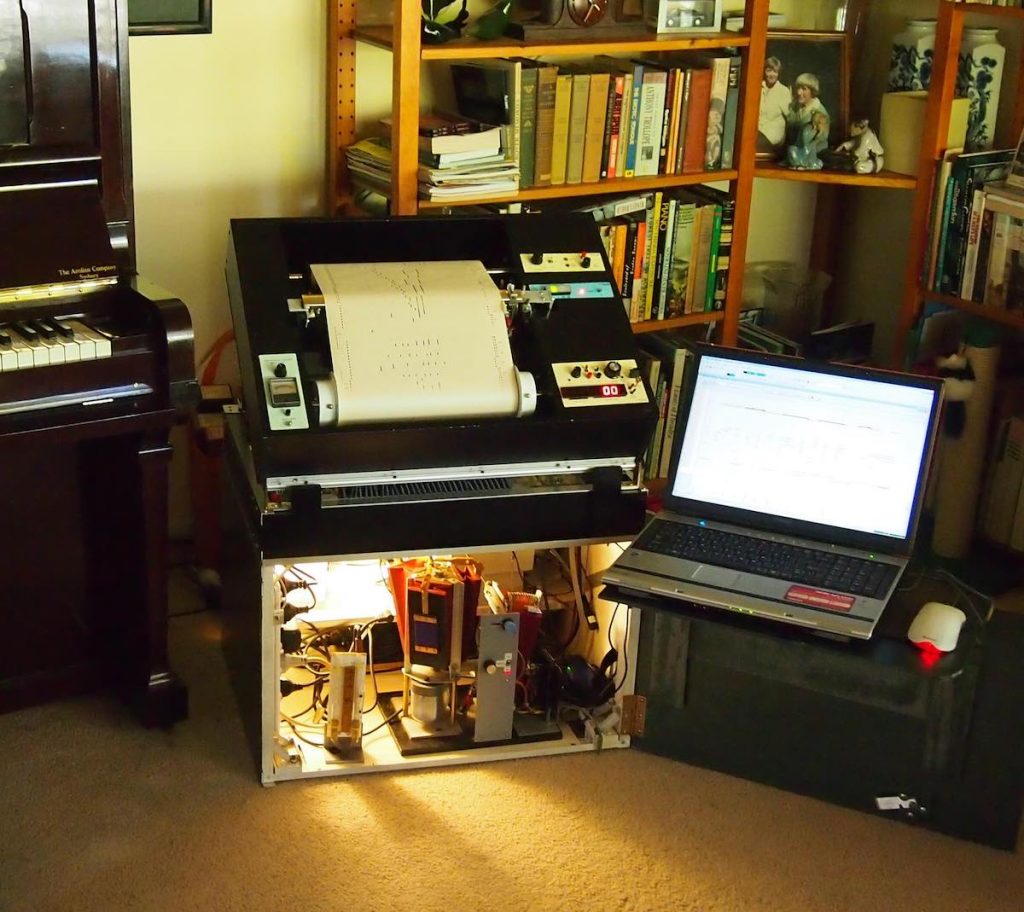 Phillips was ably assisted by another highly-skilled pianist and technologist, Stella Sick, who is also a consultant for Yamaha. Sick is a recognized expert in historic performance preservation and engineering, so she was particularly well-suited for the CSO project. 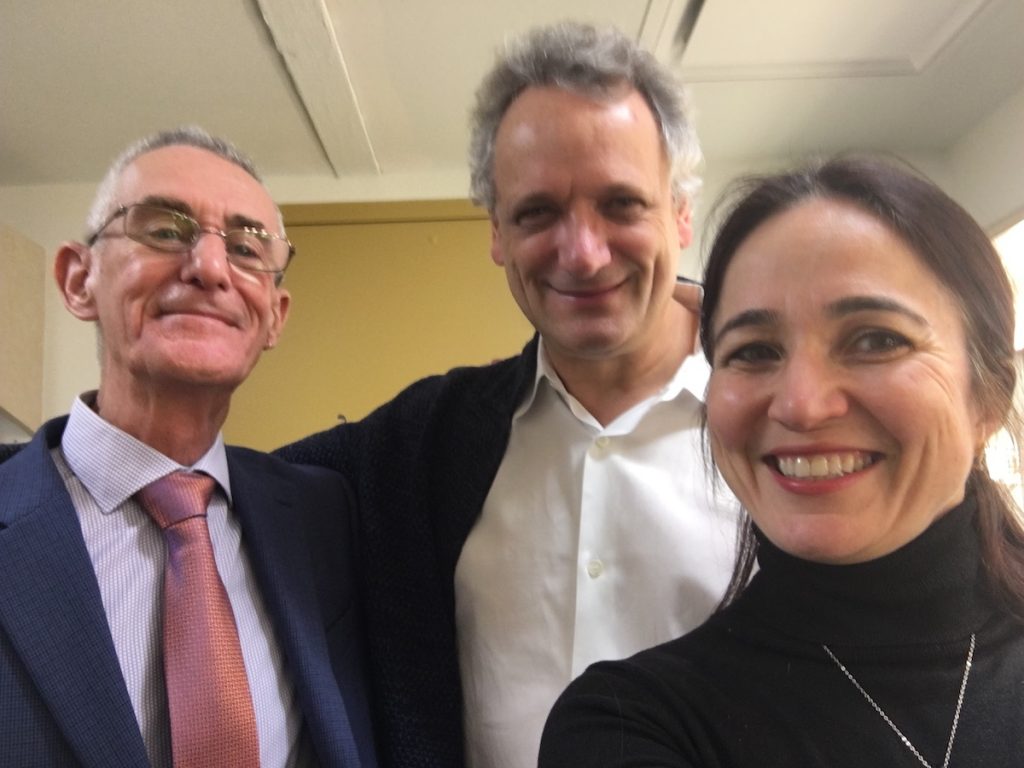 One of the problems Phillips had encountered when overseeing previous “Rhapsody in Blue” performances was the way that Gershwin, who recorded it to the rolls as a solo piano piece, played it.

“Gershwin’s playing was quite free in some parts, with unexpected tempo changes,” he explains. “[But] because Gershwin was not constrained in his playing when making the roll recording, the solo accompaniment parts were often too wayward for an orchestra.”

Noting the problems that he had with keeping the orchestra in time during their presentation of “Rhapsody In Blue,” the conductor of the Sydney concerts, Guy Noble, suggested that Phillips create a “click” track (a metronome track used as a time reference) on his computer based on the tempos in Gershwin’s performance. That way, a conductor could listen on headphones during the concert to keep time with Gershwin’s piano.

“He [Noble] suggested the click track cover the entire performance, which would mean there would be no stopping and starting,” Phillips recalls. “I [felt] that this could lead to a loss of synchronism, and it was agreed to have three breaks. So began months of work to achieve this, with the aim of having the file ready should the Sydney Symphony Orchestra decide to take it on again.”

As it turned out, the planned Cincinnati concerts presented the next opportunity. Phillips did correspond in advance with CSO conductor Langrée, but his first chance to rehearse with the orchestra (with Stella Sick sitting beside him to operate the computer) wasn’t until January 17, 2020, the day before the first performance.

Phillips had saved the three sections of click track — with their cues and the MIDI data to drive the Disklavier — as three separate files. One of Sick’s responsibilities on the project was to trigger those files to start at the correct times.

“Everything was cued up,” Sick remembers. “I just had to start one [file], and depending on how long the section was, I would key onto the next one and be ready for it while watching the orchestra.”

Phillips connected the MIDI output of the computer to the MIDI input of the Disklavier, and during playback all the keys and pedals moved just as they would have if Gershwin had been sitting there playing it himself — one of the instrument’s most astonishing features. Although Sick had plenty of prior experience with Disklaviers, she was still impressed with how well it reproduced Gershwin’s playing. “For the lack of a better term, it was like there was a ghost sitting there,” she says.

Despite the sophistication of the setup, the first run-through was anything but a success. “Shambolic” is how Phillips describes it. The synchronization between the virtual Gershwin and the real orchestra was far from perfect. Some of the problems occurred because Langrée had trouble hearing the click, which Phillips subsequently raised in volume.

“A conference was called, and we gathered in the conductor’s office to discuss [the issues],” Phillips recalls. “I had brought with me enough gear to revise the files, and we decided to break the file into ten parts, not three. [We also added] more verbal cues.”

At the next rehearsal, which was held the afternoon of the first performance, the results were markedly improved. “By dividing the file into sections that were logical and manageable,” says Sick, “We were able to give orchestra time to play things the way they were supposed to be played. They were not locked into the timing that “Gershwin” was dictating.”

Still, the desire for perfection resulted in Phillips and Langrée deciding to increase the number of separate files yet again, finally ending up with 12 different sections of click track. Amazingly, Phillips accomplished this additional bifurcation between the end of the rehearsal and the curtain going up just hours later.

The Curtain Goes Up 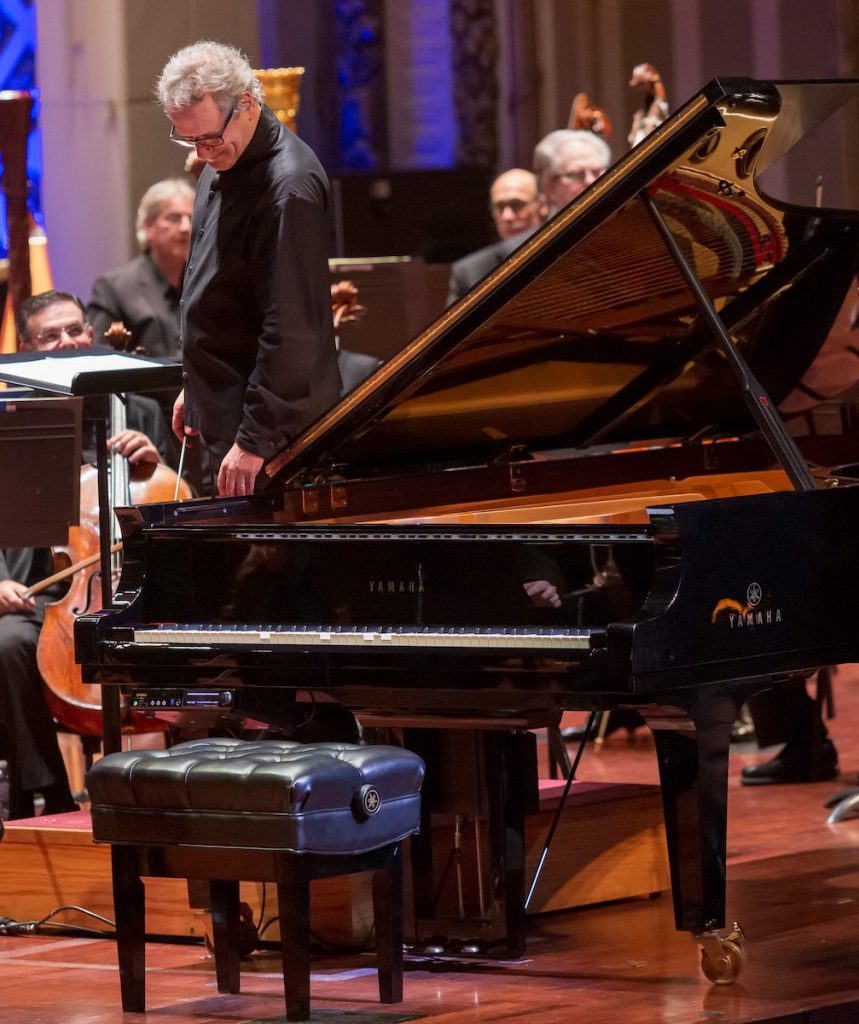 Conductor Louis Langrée and the CSO listen to the “ghost” of Gershwin playing the Yamaha Disklavier.

To the great relief of all involved, the initial performance was well-received. There were still a few glitches with synchronizing the piano and orchestra, but nothing so glaring that the audience would have noticed.

The second and final concert was presented the next day, and it went even better. “It finally came together, and this time we heard the orchestra and piano in full synchronism,” Phillips says. “While this was a huge amount of work, coupled with time constraints and inherent stress, hearing the audience react to Gershwin play his Rhapsody along with such an orchestra made it all worthwhile.”

Sick sums the experience up this way: “One of my friends — a wonderful pianist and a teacher — has said that once we stop focusing on the technology itself and instead talk about and enjoy the fruits of what it allows us to do, the technology has succeeded. That is exactly what happened in Cincinnati. Yes, of course, Peter and I focused on the technical details of making the performance successful, but the audience got to hear the real Gershwin, and the orchestra got to play with the real Gershwin.”

“I think there is a possibility it will happen again,” adds Phillips. If the results are anything like what the CSO achieved earlier this year, one can only hope his prediction comes true.

Photograph of George Gershwin by Edward Steichen/Condé Nast via Getty Images. All other photographs courtesy of the Cincinnati Symphony Orchestra and courtesy of Peter Phillips.

Click here for more information about the Yamaha Disklavier.