The History of Disklavier, Part 4

And this brings us up to our most recent history, ENSPIRE.

The ENSPIRE™ made its debut in 2016 and ushered in a new era of advanced player piano technology and wireless control. 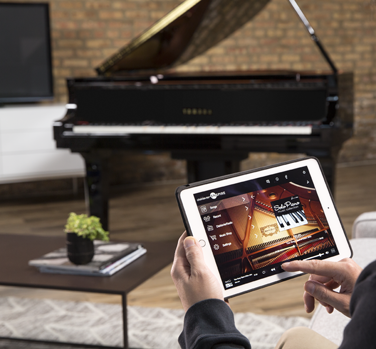 The ENSPIRE line consists of:

Available in pianos of the C3X size and larger, the ENSPIRE PRO continues the tradition of PRO model Disklaviers, providing the highest resolution recording and playback paired with the highest quality acoustic pianos, now enhanced by Hammer Sensor Feedback.

Available in the C2X size and smaller grands as well as in 2 upright models, the ENSPIRE ST offers standard Disklavier features, including full recording and playback functionality. All ST models also include the SILENT feature.

The ENSPIRE CL is a playback-only model available in a 5′ grand.

Outwardly, the various ENSPIRE models are difficult to distinguish from traditional pianos that lack the Disklavier system. The typical control box that was visibly positioned under the keyboard of earlier models has been replaced with a very small and nearly invisible “switch box” positioned much farther under the keys: 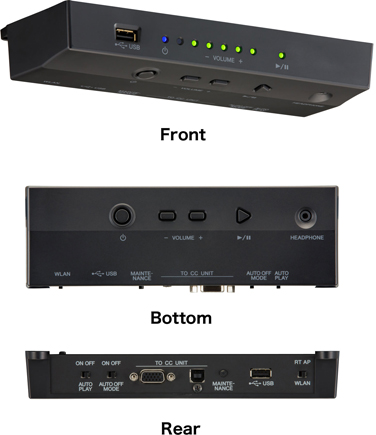 Although a few Disklavier features can be accessed using the switch box, it is expected that the user will normally use their own mobile device or even a computer web browser to interact with the instrument. Yamaha provides a custom ENSPIRE Controller app for both iOS and Android devices.

Communication between a mobile device or computer and the piano is established using normal network protocols. There are three connection methods for the ENSPIRE:

1) Using a standard Ethernet cable to a local area network. Computing devices with access to the same network can be used to control the piano.

2) Wirelessly to a local area network using the WPS protocol to a WPS-compatible router. Computing devices with access to the same network can be used to control the piano.

3) By creating its own wireless access point (i.e. private network) using the included UD-WL01 wireless LAN adaptor. Computing devices that connect to the ENSPIRE’s access point can be used to control the piano. Although the ENSPIRE Controller app for iOS and Android mobile devices is typically used to access the piano’s functions, it is also possible to access them with an HTML 5-compatible web browser running on any platform. The browser must be directed to the local IP address of the piano in order to establish a connection with the instrument.

The ENSPIRE is further distinguished by a number of new or substantially enhanced features, including:

When the piano is placed into Quiet mode, the instrument plays a new sample of the 9′ Yamaha CFX concert grand piano that can be heard on headphones. This sample was recorded binaurally (i.e. from the player’s perspective) and provides unprecedented realism.

Binaural sampling is a unique technique that captures the source instrument using equipment designed to replicate the auditory response of the human ear. In this way, the Quiet mode of the Disklavier ENSPIRE recreates the performance space of the Yamaha CFX concert grand, including the effects of incremental use of the sustain pedal and sympathetic string resonance.

Similar to a feature that was available previously only on the Mark IV, the ENSPIRE has a set of performance voices that can be layered onto the native acoustic piano sound or used alone in Quiet mode.

Over the years, Yamaha has continued the development and application of similar feedback loops in a variety of standard and PRO models. The ENSPIRE PRO has taken these innovations even further with the introduction of hammer sensor feedback in addition to key, pedal, and moving magnet monitoring.

Previously available only on the Mark IV, the ENSPIRE has reintroduced real-time USB audio recording. While playing the instrument, you can simultaneously capture an audio recording that is created using the CFX concert grand piano sample or other chosen performance voice. The recording is saved to a connected USB flash drive. This feature provides, in essence, “microphone-free” audio recording.

The ENSPIRE also includes a more advanced set of 480 XG voices that were derived from the world-class line of Clavinova digital pianos from Yamaha.

The MIDI In and Out ports and the USB “To Host” port can be used simultaneously for MIDI communication. When coupled with either Yamaha Bluetooth® LE MIDI adapters (MD-BT01 or UD-BT01, available separately), wireless MIDI transmission and reception are possible.

The ENSPIRE can be integrated into a wireless whole-home audio system using Yamaha MusicCast technology. By doing this, the user is no longer limited to the listening space of the acoustic piano but can enjoy piano music anywhere in the home via MusicCast wireless speakers and AV products. Control of the instrument is integrated into the MusicCast app’s user interfaces, making control of the instrument easy and intuitive.

Today, the ENSPIRE PRO series of Disklavier pianos represents the flagship of Yamaha piano technology – combining the most advanced Disklavier system with the finest acoustic piano design from Yamaha.

Haven’t yet had a chance to enjoy learning about the earlier chapters in the History of Disklavier? Check them out here:

And at any time, check out what is happening now at our dedicated site for Yamaha Disklavier.