The History of Disklavier Part 2

Keeping up with the tech boom.

And the next chapter in the History of Disklavier:

An important historical moment in the evolution of the Disklavier occurred in 1998. The new PRO Disklavier – with a Mark IIXG control unit – offered unprecedented recording accuracy and playback realism.

With improved solenoids and a new moving magnet sensor and key sensor servo, the Disklavier PRO was capable of recording and playing back performance data with greater resolution than the MIDI spec normally accommodates.

The Disklavier PRO, on the other hand, was capable of reproducing the full range of dynamics – and it did so with 8 times the resolution of normal MIDI data, recording hammer velocity, key down velocity, and key up velocity on a high resolution scale of 0-1023. The instrument used normally unused MIDI controller messages combined with key aftertouch messages to store the extra bits of resolution in a Type 0 Standard MIDI File. This high-resolution performance data was called extended precision (XP) data.

With the introduction of the Disklavier PRO, pedals were no longer limited to 16 increments but were recorded on a scale of 0-127, thus taking advantage of the full granularity of the MIDI specification. The PRO even recorded and accurately reproduced brushed notes – keys that were moved slightly during the performance without the hammers actually hitting the strings.

Available only in C3 (6’1″) and larger grand pianos, the Disklavier PRO looked outwardly like any other Mark IIXG Disklavier. Its control unit provided the same user functions as other Mark IIXG pianos. There was one important difference, however – the Mark IIXG PRO was the first Disklavier grand to include the Silent system.

In 2002, the Minnesota International Piano-e-Competition made history by enabling pianist Yefim Bronfman to judge the competition from Japan. The sonata round of the event was recorded with a Disklavier PRO concert grand piano with synchronized video. The video and MIDI files were uploaded over the Internet and reproduced for Bronfman in Japan, where he watched the contestants on a large screen and listened to a concert grand Disklavier reproduce the performances.

In 2000, in celebration of the 100th anniversary of the very first Yamaha piano, Yamaha presented the world with a concept piano that demonstrated remarkable, future possibilities. Called the Disklavier PRO 2000 it was a C7 (7’6″) piano with a Disklavier PRO system installed, housed in a case that was based on the modern design called Neo. 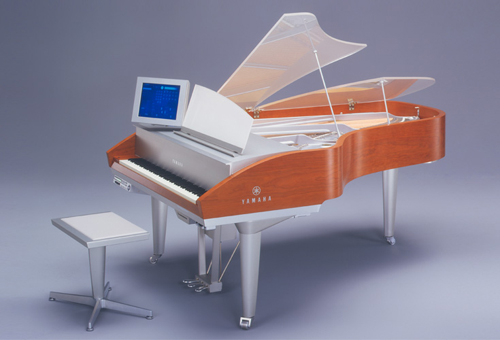 The PRO 2000 was visually noteworthy for its clear, acrylic glass, split lid and built-in computer monitor. Indeed, the piano came with a Windows 98 PC mounted underneath and connected to a touchscreen monitor that was positioned to the left of the clear music desk.

In addition to providing  video-synchronized performances, the PRO 2000 also included score-following software called Home Concert 2000 from TimeWarp Technologies, as well as an advanced generator that included a built-in performance mode.

Only 9 of these instruments were produced, and they were later sold for $333,000, making them the most expensive Yamaha piano of all time.

Want to continue learning about the History of Disklavier? Join us for the next chapter (third of four) here.

And if you missed it, catch up on the first chapter and learn about the inception of the Disklavier here.

And at any time, you can keep up with what is happening at the dedicated site for Yamaha Disklavier.