In this lesson, we’ll explore the “Side Chain” function of the Motion Control Synthesis Engine, which allows for modifying one Part with another. It also extends to the external world as well, because the source Part could be an external input (microphone, guitar, audio device, etc.). This can take several forms; we’ll take a brief look at three of the basic possibilities – including one popular in Electronic Dance Music.

Insert Effects are those that are unique to the instrument sound occupying the PART. Each of the MONTAGE’s 16 synth PARTs – plus the A/D input PART – has its own pair of Insert Effects, which are customizable on a per PERFORMANCE basis. These can be configured in series or in parallel and can be routed to from within the synth engine. Significantly, the Insert Effect is not shared by any other PART, and is routed “inline” with the particular instrument sound, allowing you to control this Effect on a per PART basis with assigned physical controllers.

Note also: To avoid unintended Side Chain Modulation, the Side Chain Part selections for Insert Effects should be left in the default condition – that is, set to OFF. A Part selection should be made only for activating Side Chain Modulation. To understand this, the SIDE CHAIN connection option allows audio signal from the source PART to enter and influence (that is, modify) the output of the current PART via its assigned INSERT EFFECT. So just by making the connection, audio is routed in – what we can do is increase or decrease that audio. If you do not want audio signal to route via the side chain, simply leave the parameter set to OFF.

The PART with the INSERT EFFECT Side Chain Input will be modified by the PART you route via this “side” input.

The source signal becomes the modulation energy. Its audio creates the nature of modulation – the shape of the energy that is used to make changes in the target destination parameter. In the case of a compressor, you can have the audio pulse of one Part influencing the target destination’s audio. The Ring Modulator Side Chain can be used to add radical detuning on cue from the pulse of the audio source; the Dynamic Filter, Dynamic Phaser and Dynamic Flanger each add a distinct audio result in response to the selected source. These are just some very basic concepts to get you started; like patching in a modular synth, the actual results will really depend on your creative imagination – what you choose as the source and what you choose as the sound being modulated. In this lesson, we’ll show some typical examples, but these are what’s already been done (and is now popular) – experimentation is required here for optimum (or most unique) results. The best way to understand this is to hear it, then explore the settings.

This example shows a very typical Side Chain Compression result, where a “pumping sound” is created for a synth pad caused by the input of a bass drum groove. The Pad sound is interrupted by the input of the bass drum. PART 1 contains the Pad sound and PART 2 contains the arpeggiated Kick Drum. The Kick drum causes the Pad to “duck” in volume. So the Compressor is applied to the Pad in PART 1, and instead of using the Compressor to respond to the attack and release of the Pad itself, we are using PART 2’s audio to ‘duck’ the Pad via a Side Chain input:

In PART 1’s Compressor you would set PART 2 as the input (Side Chain Input). Side Chain uses the compressor’s Gain Reduction function to create an envelope. The Kick and the Pad cannot happen at the same time when fully applied.

Only two settings are needed for programming the Side Chain Compression of PART 1:

First, the Side Chain Part must be selected as Insert Effect “A” in the Part Effect window. It is PART 2, in this example, that includes the bass drum groove.

The Side Chain Input and its Level parameter are found in the MONTAGE by navigating to the PART’s Insertion Effect.

From the main PERFORMANCE (HOME) screen: 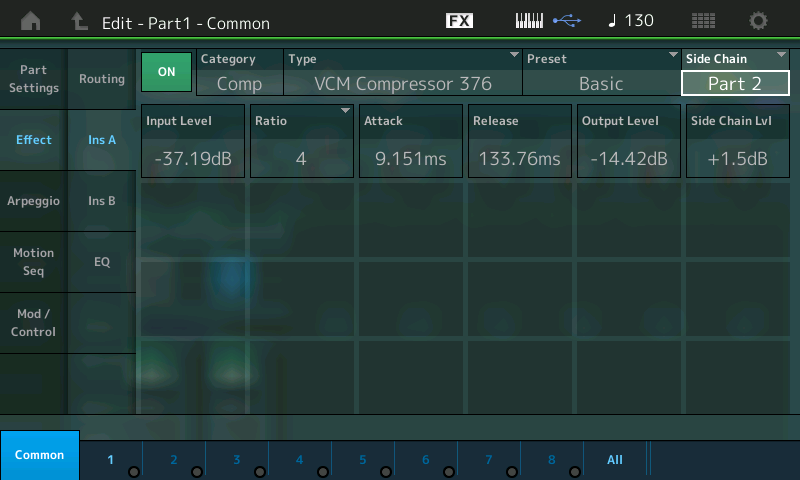 In the view of the overall Effect ROUTING, you can see where the SIDE CHAIN function is attached to the INSERTION EFFECT “A” box: In this “Routing” screen you can see that each Element can be routed through one or the other (or neither) of the two Insert blocks (A or B). Currently, only Element 1 is active, and it is routed to the VCM COMPRESSOR 376. Notice that it passes through a 3-Band EQ pre the Insert Effects block, and there is a 2-Band EQ post the Insert Effects blocks.

You can also see that the “INS CONNCT” option in the center can configure the Inserts in series (A>B, B>A), or in parallel. The “Side Chain” option appears above the Effect block where you select the Insert Effect TYPE (Insert A). You can reassign it easily here – convenient redundancy – so you can quickly and easily try out different modulation sources.

Background Details: The SIDE CHAIN is a routing situation that allows audio signal from the SOURCE PART – in this case, PART 2 (an arpeggiated Kick Drum) – to create a modifying signal. Here, the amplitude “shape” of the Kick Drum audio will cause the compressor to engage. Compressors are a type of amplifier where the more signal you send in, the less you get out. It literally compresses the dynamic range (the difference between the softest and loudest sounds it receives).

The MONTAGE Compressor reduces the GAIN of the signal it is applied to – however, in SIDE CHAINING, we flip the script so that, instead of compressing the Pad, we are going to create an envelope from that incoming signal (the Kick drum) and use it to “duck” the Pad sound in PART 1. As the incoming signal rises in amplitude (in other words, as it attacks), it will cause the PART 1 sound to decrease (turn down) and as the Kick’s audio signal (energy) disappears, the PART 1 sound will return. The end result? A rhythmic pulsing/pumping sound.

“Ducking” is used often on the radio, where the DJ’s voice (source) causes the music to duck down while he/she is talking, and then automatically return to full volume after the DJ finishes speaking. You can control the ATTACK (how quickly it engages) and RELEASE (how quickly/slowly it lets go) of the signal creating the ducking action. The Attack Time and Release Time settings are critical to shape the results. When used for speech or singing, the Release should obviously be less abrupt than it would be on a percussive signal like a kick drum or snare drum. Basically, set them by ear!

This particular effect is also extremely popular in Electronic Dance Music, but exactly how you choose to use it will be a matter of experimentation and preference. Side Chain Compression is one of the most popular uses for Side Chaining. In MONTAGE, however, the options for this function are expanded – and the possibilities are many.

The Side Chain Input Level must be adjusted for Insert Effect “A”. Each SOURCE is likely to need specific adjustment, depending on exactly what you are using to create the reaction. A pre-recorded source is likely to be consistent and therefore easier to deal with, but virtually anything can be used as a source. Experiment!

The depth (application) of the Side Chain Modulation can be controlled with the Super Knob too, which in this case is assigned to the Side Chain Input Level (InsA SChnLvl). In this manner you can use the Pad normally and then morph to a situation where the Pad and Kick are interacting at the extreme.

Here you can see the required settings in the Common and Part Controller Boxes, using these SHORTCUTS: 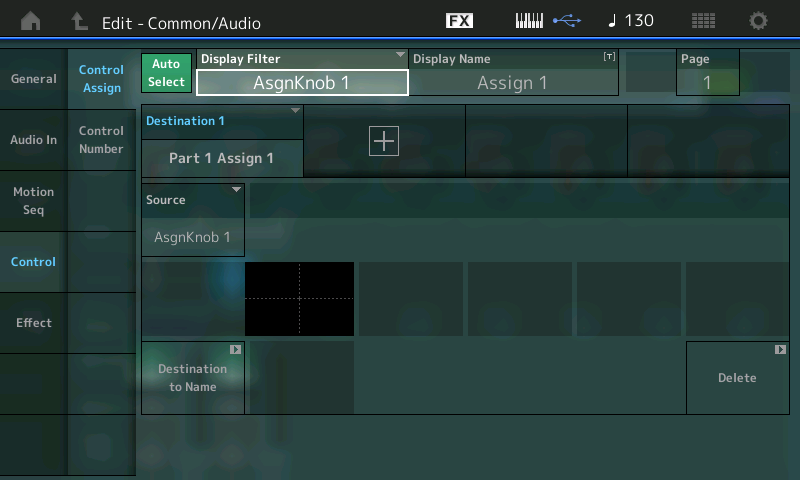 You can return to the OVERVIEW screen by pressing [EXIT] or using the [SHIFT] + [PERFORMANCE (HOME)], then change the PART = PART 1 and touch “Edit PART 1 Control Settings”: You will hear the KICK appear as you reach the 12 o’clock position, and as you increase from there, you will hear the Side Chain Compression Kick “ducking” the Pad sound.

This example is a variation of the previous Performance = Side Chain Comp. But this time, instead of the arpeggiated bass drum groove in PART 2, a synth arpeggio part is used for the Side Chain Compression. The audio pulses caused by the arpeggio phrase now become the modifier. You can use the ARPEGGIO Play FX to create Swing, change the Gate (duration), or offset the Velocity – even change how the phrase references the clock (tempo).

PART 1 uses a soft string pad Waveform, which works in combination with the synth Arp of PART 2. In this example, the synth arpeggio plays a dual role, musically complementing the chords played and rhythmically interacting with the pad sound underneath.

Below we see PART 1 – Common > “Effect” > “Routing” where the Side Chain input arrives from PART 2. Notice in the lower left corner you can see the PART OUTPUT, which is sent to the MAIN L&R outputs: In the screenshot below, we see PART 2 – Common > “Effect” > “Routing” but the cursor is showing the PART OUTPUT. Experiment by turning the PART OUTPUT from “MAIN L&R” to “OFF”. You will still hear the influence of the Arpeggiated PART 2, but now you will not hear the sound of the PART directly. We point this out because it can be a very useful tool, and greatly expands how you “look” at arpeggios. You can use the rhythmic shape they create without using the musical note pattern that we typically always hear/expect from arpeggios. Remember, most anything can be a modifier in the Motion Control Synthesis Engine. This example is another variation, using the same modulation source (PART 2 with synth arp), but a different Insert Effect in PART 1. Different from the complementary functionality of the previous example, this time PART 1 supports the arpeggio groove, which is used as the modulation source.

We will mention the VOCODER here simply because it is another INSERT EFFECT that allows for Modulation. While technically speaking, not a SIDE CHAIN in the same manner as the ones described above, one Part’s signal is fed into another via the target’s INSERTION EFFECT:

Again, the source could be a drummer (“live” or via machine), a guitar player, a vocalist, a mix tape, your favorite playback device, another synthesizer – the sky’s the limit.

Catch up on the previous article in the series – “Mastering MONTAGE 9: Controller Box Switches” here.

The next article in this series – “Mastering MONTAGE 11: Envelope Follower” – can be found here.