Lesson 2: How ARP Convert Types deal with NOTE data chords.
This is a very important issue, which is often overlooked before you start creating your own arpeggios. For an arpeggio to be useful with chord intelligence, you really do have to think about it in a single musical key. For example, when you perform a song like “Girl From Ipanema,” you’ll voice an F Major7, then a G7, then a G Minor7 and then C7, etc., and will simply want the chord that you finger to play in a Bossa Nova feel.

But you would not need to voice these chords in the arpeggio creation data. Instead, you would play just a simple 4 note chord in a particular rhythmic pulse that feels like a “Bossa Nova” – this is all you’d need to record to the ARP TRACK. When you actually use the arpeggio, by assigning it to a Part in a PERFORMANCE, you would then input the chord progression, as required. Besides, the limit of 16 unique notes would also make recording actual chord progressions as source material untenable.

The Arp does not need to be the whole progression (in fact it would be wrong to record a whole progression in a general purpose Arpeggio Phrase). Remember that the person recalling your Arp will want to define what chords it plays, so you cannot put too much information into your arpeggio phrase.

So in this case you only need to record just the correct number of simultaneous notes necessary to be a guitar, and you need to play that one chord in the right rhythm.

Four Track Arpeggiator
I know this may be a bit difficult to grasp without actually working with the instrument, but the additional multiple tracks in the Convert Type function are for when you want to add additional rhythmic items. All four tracks will address a single sound – each doing a separate rhythmic role, and possibly using a completely different Convert Type. For example, in our guitar Bossa Nova example, we might want to put in a guitar sound effect (a thump or knock or finger zing, etc.). These only occur on occasion and may have an entirely separate rhythmic pulse from the normal string notes. In addition, the sound effects are often recalled by a particular (fixed) key within the guitar waveform map.

If you listen to the following Performance with its arpeggio patterns you can hear what we’ve been describing:

Call up the Performance Mega Nylon.

Initially, ARP 3 is selected to play (bottom row of buttons when on the Home screen are Arp Select 1-8):

The mute string noise and the sound FX (Elements 4 and 7, respectively) were recorded using a separate arp source track.
The body of the guitar (strings playing normal) was converted using ORG NOTE, because it adjusts to chord quality.
The noise and sound effects are accessing the same notes in spite of you changing chords, so they were created on a track set to FIXED.

You can imagine that the same MEGA NYLON sound was placed on several adjacent Tracks and each component to create this arp was recorded separately.

Return to the [PERFORMANCE (Home)] screen:

Here you can isolate each and find that Element 1, 4, 5 and 7 are each contributing something – again, a unique rhythm. From this you can tell that 4 CONVERT Tracks were used.

This is a Mega Voice so different articulations can be precisely triggered by notes playing at a specific velocity.

Return to the [PERFORMANCE (Home)] screen

Press ARP SELECT 4.
Here is a Bossa Guitar – what was originally played was a C Major7 chord.

If you want to play a Bossa Nova tune with this Arp, it is up to you to define the chord changes. (This one sounds like it was done with three Convert Tracks: one for the chords, one for thumb bass, the third one is for the finger zings – they have to have been recorded separately – the finger noise is “fixed note.”)

Shown below are the three tracks that, when combined, make this arpeggio phrase.

Here’s the result when you input C Major 7 (Track 1 was the main body of the guitar):

Track 3 – Here, shown two octaves lower than actual, are the notes used to recreate the “fret noises” heard in the arpeggio phrase:

In the “Mega Nylon” Part, the noises, knocks, scrapes etc., are mapped at the extreme high end of the key range, above the range of the normal guitar tones.

Important: Recording this data to the MONTAGE recorder would require placing the same “Mega Nylon” Part into Parts 1, 2, and 3 of a Performance. Although only one instance of the “Mega Nylon” will be used to play it back as an arpeggio, it takes three instances to create it!

When setting up to transfer these three tracks, you can imagine the “Put Track to Arp” setup would look something like this: 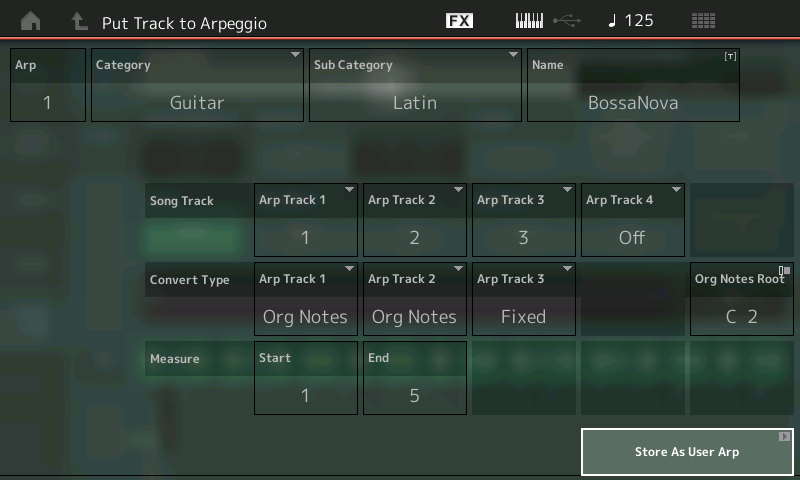 The “Mega Nylon” Performance Part is an eight-way velocity switching instrument mapped across the natural range of an acoustic nylon string guitar; above that range are noise components associated with playing a guitar. It is composed of the following data:

Because MEGA ARP data is specially prepared to trigger specific articulations, you can create your own Mega Voice arpeggios using this road map. You “prepare” the data so it references the exact articulation at the moment you require it. Yes, editing is going to be a part of preparing a Mega Arpeggio for a MEGA instrument sound.

The “open” sounds are the strings and the normal sound you expect from a nylon guitar when played – and would use the Convert Type = Original Note, velocities less than 60. Because Dead notes, Muted notes, Hammered notes, Slides and even Harmonics require specific pitches, they two are Converted using Original Notes. The Strumming and Fret noise components will need to be placed and use the Convert Type = Fixed Note.

Recall “Texas Chicken Pick” to listen to how different Arp Convert Tracks can be used to assemble a multi-rhythmic musical phrase. Activate the main ARP ON/OFF switch. This familiar dominant 7 guitar riff is designed to play when you hit a single key defining the root. Can you hear the number of tracks used here? (It’s three). There’s the root bass thumping away, then there’s the 5-6-dominant7 climb, and there’s this noise thing. The phrases are played so they specifically trigger the specific guitar articulation to execute the phrase.

You can hear how using the Arpeggiator to generate this realistic guitar phrase can be compelling in a mix. It has feel, which is adjustable, and it has the attitude of a guitar riff. It is the little details that make these compelling. The first time a friend asks you, “who’s playing the guitar?” you’ll understand just how believable these can be when used properly in a track.

Finger-picking guitar phrases can be very convincing when you challenge them with your chord progressions. Creating these kind of phrases, while difficult, is doable. It requires an understanding of how the Arpeggiator will “sort” the notes when fed different chord qualities – will it behave when challenged with various chord voicings as input?

Here’s how to isolate them:
This phrase is using multiple guitar articulations, accessed by fulfilling the requirements to trigger the specific Element. In Part 1, it is Elements 1 and 3 that are each doing a distinct individual line, and in Part 2, it’s Element 2 that is articulating a separate sound fx phrase. The total arpeggio phrase is constructed from three separate phrases, assembled from three separate source tracks within the Convert to Arpeggio function. The take-away here is that the arp tracks are used to target specific portions of the same target sound.

To isolate the Elements:

You will see activity for each sounding Element as it fires. You can mute or use the [SOLO] function to isolate each Element.

Use the Element Mutes or Solo to isolate and hear the contribution of each.

Once you hear the lines separately, you can always hear them but together we accept it as a phrase.

Breaking Bad
That said, there is nothing that says you have to follow this rule. If you are not marketing your Arps for others, you can make it do whatever you want or require – as long as you respect the ARPEGGIO rule: You can use only 16 unique notes. This means that if you are recording a FIXED NOTE arpeggio for DRUMS, for example, you can only use 16 different drum sounds. If you are recording a musical arpeggio, you can still only use 16 different notes. If “C3” is one of your notes, you can hit it as many times as you require: When we say only 16 unique notes we mean that only 15 other note names can be involved. For example, the first four bars of “Mary Had a Little Lamb” contain 26 notes total, but only 4 unique notes: C3, D3, E3 and G3.

Making Great Arpeggios for Specific Use
Nothing says you have to use the Arpeggio function for general purpose use. You can create an arpeggio for very specific personal use, too. The factory arpeggios are chord neutral (for the most part) – when you select them, they mold themselves to the chords you voice to control them. Nothing prevents you from using the “Fixed Note” Convert Type so that when you trigger your arpeggio, it plays exactly what you programmed – because that is what you want it to do. But it is important to know the rules of the arpeggio and the arpeggio conversion function before you attempt to bend or break those rules!

For example, you can, if you prefer, use the FIXED NOTE arpeggio Convert Type to create musical backing of very specific phrases, using the eight ARP SECTION buttons to create different portions of your backing tracks for real time re-arranging. Each ARP SELECT 1-8 could be a complete backing for a Section of a composition, while you play on top using Parts you select.

Want to go back to Part I? Click here.