The beginning of any year is filled with promise from every walk of life. In the electronics business, there is no more exciting time thanks largely to one signature event: CES (the Consumer Electronics Show), held annually in Las Vegas. This is where the largest technology companies showcase their newest technologies and debut their soon-to-be-released products.

With more than 4,400 exhibitors and over 170,000 attendees from 160 countries, CES is one of the largest trade shows in the world. If you’re a fan of electronics — or even if you’re just curious about what kinds of new gadgets will be on sale in the coming months — then we’ve got you covered. Here are some of the hottest products to come out of this year’s show.

Back in December, Apple®, Google, Amazon and ZigBee (developer of wireless mesh networks) came together to create a smart home protocol called CHIP (Connected Home IP). This universal standard is meant to make smart devices — even those from different manufacturers — more compatible throughout the home, which is especially meaningful when it comes to Apple devices, since Apple has, up until now, been a closed-source company when it comes to software applications. Shortly before the show, Apple announced that it will release an open-source version of its Home app (which enables control of HomeKit™ accessories) to accelerate the development of CHIP. 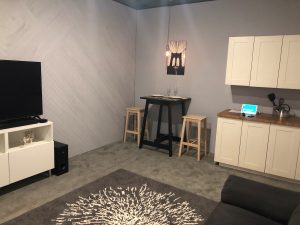 To demonstrate how the Apple HomeKit can work with a variety of products in a connected home, Yamaha presented a smart home room with Phillips® Hue smart lights, an LG™ smart TV and several MusicCast audio products, including a MusicCast BAR 400 sound bar, two MusicCast 20 wireless speakers and a MusicCast 50 wireless speaker. The room showcased how a HomeKit hub can be used to create “scenes” throughout the home with customizable voice commands, such as “Hey Siri®, it’s movie time,” which turns on the TV and changes the lighting to set the mood for you to watch your favorite content after a long day at work. You can watch the full demo here.

If you’re in the market for a new TV, there are plenty to choose from on the market. Electronics manufacturer TCL has a TV that lets you integrate with Google apps like Google Maps™. You can search a Google Maps location on your TV and have it transfer seamlessly over to your smart phone once you’re ready to leave.

Samsung® is also launching an 8K Ultra QLED TV this year that has a feature called Multi View. This allows you to instantly cast your smartphone’s display onto the TV (all you have to do is tap it on the side of the TV) so you can, for example, watch a sports event live and see your social feed talking about it in real time, right next to it on the screen. For Apple users who might be concerned about it not working with Apple products, don’t worry — it’s compatible with both iOS and Android™ devices. 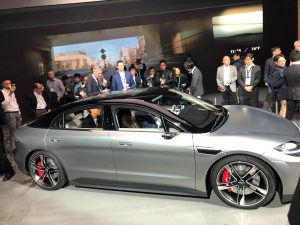 During its CES 2020 keynote, Sony™ surprised everyone by introducing its first car — the Sony Vision-S. Don’t get too excited though, as it’s not intended to be sold to the public. Instead, this electric concept vehicle will serve as an internal prototype to test the company’s future technologies and showcase what those technologies can do when utilized in one contained ecosystem. The car includes a panoramic screen built into the dash, as well as the company’s virtual object-based 360 Reality Audio, 33 sensors and a variety of side-view mirrors and 3D camera technology to project a “safety cocoon” — a safe zone surrounding the car thanks to its 360-degree camera views.

On the gaming front, Google has recently introduced Google Stadia™, a cloud-based gaming platform that lets users play without the need for a physical console. All you need are a wireless controller (it can be an official Stadia controller or one from another company) and a Chromecast Ultra™ device.

With the rise of gaming platforms like Google Stadia and xCloud by Microsoft®, mobile gaming has seen major innovation in the past year. This should accelerate further still with the release of the Razer™ Kishi, a controller (and Best of CES 2020 award winner) that attaches to both iOS and Android smartphones, similar to the Nintendo Switch™. Slated to ship at the end of March, this is coming just in time to piggyback on the smartphone gaming revolution that will allow you take games with you anywhere you go — even those previously only available on a console.

Top of the Heap

Speaking of awards, each year, CTA (the Consumer Technology Association, responsible for running CES) gives companies the chance to compete for the CES Innovation Awards. The program honors outstanding design and engineering in consumer technology products. Given how many companies have been trending towards the connected home and the IoT (Internet of Things), we thought it would be helpful to mention some of those winners.

Belkin™ has announced a Wi-Fi motion sensing subscription service called Linksys™ Aware that uses your existing Intelligent Mesh Wi-Fi network to sense motion without the use of cameras or additional hardware. It detects movement through Wi-Fi signals and sends you notifications through the Linksys App when motion has occurred.

As an extension of its smart home security ecosystem, Arlo™ won an award for its Arlo Floodlight™, said to be the first wire-free floodlight on the market. It has an integrated camera to add a layer of security to homes and can connect as part of the smart home through Arlo’s AI subscription-based service Arlo Smart. The camera features a 160-degree diagonal viewing angle and 2K HDR crisp video with color night vision capabilities.

For those looking to do presentations on the go, the Hachi Infinite is a portable short-throw projector that turns any flat surface into an interactive HD touchscreen of up to 100 inches. It lets you project onto a table or against a wall for added versatility, and also features voice control with Amazon Alexa.

That’s CES in a nutshell. From smart home innovations to gaming on the go and even a new car, it’s safe to say that we are entering an era of exciting possibilities. If you can’t attend CES next year, be sure to check back here for a recap of the latest trends.

Read more related blog posts on how MusicCast can integrate with a smart home:

Five MusicCast App Features You May Not Know

How to Use Yamaha MusicCast with AirPlay 2

How to Use Actions on Google with Yamaha MusicCast

How to Use Alexa with MusicCast