Music can be one of the most powerful ways of bringing people together. For many musicians, this realization often comes with their experiences in school band. Here’s how Grammy®-nominated producer, singer, composer and woodwind player extraordinaire Scott Mayo got his start, and how the lessons he learned in his early days not only helped shape his career, but led to an unshakeable belief in the power of music.

“Every morning they would start school with announcements,” he continues, “and one day they said, ‘If you’re in fourth grade and up, you can try out for band — just come to the band room after class.’ Right away, I was like, ‘Oh, I want to do that,’ even though I don’t really know why there was an ‘Oh, I want to do that’ in me! There was this sort of call on my life to become a musician.”

Deciding on the Right Instrument

Scott returned home and excitedly told his mother the news. Her response was to ask him what instrument he wanted to play. “I said, ‘I want to play drums.’ She said, ‘Too loud. Pick something else.’” His second and third choices — trumpet and guitar — were met with the same reaction. With a laugh, he remembers his mother saying, “Why do you keep picking the loud instruments?”

The alternative she suggested — clarinet — was based on practicality: Both of Scott’s brothers had played the instrument, and there was already a clarinet in the house. “I would come home from school and I would put my clarinet together and play along as best I could with the commercials or the cartoons I was watching,” he says. “That was sort of the thing that just amused me.” A few years later, Mayo added saxophone and flute to his repertoire (“I just loved playing instruments”), and there was no looking back.

“It’s funny,” Mayo says today with a sense of irony, “because all of the instruments that my mother rejected are actually my favorite instruments. I love drums, I love guitar and I love trumpet.”

By the time he got to high school, Scott was playing in wind ensemble, concert band, jazz ensemble and marching band … along with being a varsity athlete. “It really was challenging and some things suffered at times,” he recalls. “I just found a way I could stay up late practicing my instrument. I needed to dedicate the time because I had a really demanding high school teacher who saw the seeds of me becoming a professional. There was a point where I had to make a decision as to what I was going to do. And I did make that decision [to devote myself to music instead of athletics], and happily.”

“I had really wonderful friends that were supportive and encouraging,” he says. “There was one flute player in my high school that was particularly good. She was a really advanced flute player and she would help me because she was better than I was. We would play duets together; quite often we had saxophone quartets and quintets. Somebody would bring in some music and we would sight read it and play it together and then we’d switch instruments and play somebody else’s part. It was a really life-changing experience to have a community of musicians where I felt safe to not be so good all the time.”

Support from Family Too

When Mayo made the decision to take up saxophone, he remembers his father going out and getting him a sax “like the next day.” A couple of years later, Scott wanted to learn to play flute too. Again, he recalls, his father’s reaction was “‘Okay, no problem.’ He just went out and bought me a flute.”

“He also started taking me to these jam sessions on Sunday nights [even though I was] way too young to be able to get in — he’d tell them, ‘This is my son. He’s a saxophone player.’ I would always take my horn [even though] I knew nothing about jazz, especially improvisation. I would keep my horn in its case and just listen to these incredible musicians, many of whom were famous [even though] I didn’t know it at the time. Eventually I would learn melodies. I learned this one Charlie Parker [tune] — just the melody; I couldn’t play the solo. I went there one week and asked the musicians if I could play it. They were like, ‘Yeah!’ I played the melody and they acted like it was the best thing that ever happened to them in their entire life.”

“I’m grateful for my high school experience because it literally prepared me for what I’m doing right now,” says Mayo. “A lot of the habits that I have as an adult started in high school band. [For example], I couldn’t show up late for rehearsal; that was unacceptable. So consequently I learned that you don’t show up late for a session, or a gig.” 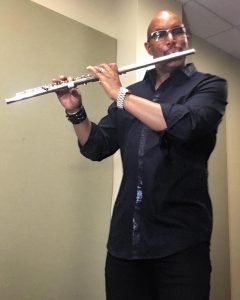 Those experiences also helped shape a life-affirming philosophy about the power of music. “Playing in band taught me that you have to find a way to work with people that are different, whether you like them or don’t like them,” he reflects. “You have a piece of music in front of you and you have to find a way to make it sound good. At that point the differences disappear. [If we] can nurture more young musicians then perhaps we can see the world changed because then we can start to show people how well we work together in spite of our differences, that we can create beautiful melodies and harmony and make people cry together because we work together.”

“That is the bottom line,” he says. “No matter what the differences are, make beautiful music.”