“I definitely remember my days of early morning cello schlepping,” says Tina Guo with a laugh. “In college, I was pretty regimented. I would get up at 5:30 every morning so I could go to the gym and then get to the practice rooms right when they opened. Then I would practice for three or four hours before going to class.”

Guo has become one of the world’s most renowned cellists, with composing and performing credits on soundtracks for chart-topping movies as well as video game scores and numerous record releases, and a new album coming out soon on a major record label. But before all that, there was a dedication to her craft.

Guo’s musical commitment was instilled in her at an early age, through her father, a professional cello teacher, and her mother, a violin instructor. “I was born into the family trade,” she jokes. “I had no choice but to practice eight to ten hours a day.”

The technical proficiency that sprung from this helped earn her acceptance into a prestigious college music program as a performance cellist major. And it was there that Guo began to develop a unique creative vision — one that would ultimately take her to the next level. 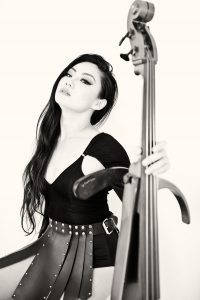 As Guo began her studies, she also started to experience more diverse influences. “When I first got to college it was all classical,” she remembers, “but then I discovered the Yamaha Silent Cello™, which changed my entire world. As I began exploring new sonic possibilities with this instrument, I started experimenting with other types of music and genres.”

One day, Guo had a bolt of inspiration. “I wanted to be like a guitar shredder and play heavy metal on the electric cello,” she says. “That was really my thing.”

The two different career paths Guo was considering — a traditional one in classical music and a distinctly non-traditional one following her own creative vision — soon began to converge. “I learned some great things in college, and there was one teacher in particular — cello professor Eleonore Schoenfeld — who told me two things I’ll never forget: One, she said, ‘Dearie, there is a fine line between the sublime and the ridiculous,’” referring to Guo’s free-form interpretative playing style. “And the second was that the best teacher is someone who teaches you to no longer need a teacher. Because you can’t always depend on someone to tell you what to do.”

Following that dictum, Guo decided to drop out of college and focus full-time on her metal band projects and trying to find gigs as an electric cellist. But the money had yet to match the effort. “My parents told me to stop being crazy and just audition for an orchestra, because ‘you’ll have a safe job’ and all that,” she reports with a chuckle.

Seeking to appease her parents, Guo prepared to audition for an open cello position at a major symphony … but not without giving her dream one last shot, making the bold decision to self-fund a music video featuring her metal prowess on the electric cello. “I was living in a garage at the time with no air conditioning and no heat — it was pretty terrible circumstances,” she remembers. “I thought, OK maybe this video will be my last hurrah, so I’m just going to make it and put it out. At least I’ll be able to tell my grandkids, look at what I did when I was 20 years old!”

The video became a big hit online, attracting the attention of none other than famed film composer Hans Zimmer and culminating in an offer for Guo to tour with Cirque de Soleil. “It was more money than I had ever seen in my entire life,” she says of the compensation she received, “it wasn’t until then that I was able to pay off my school and instrument loans, credit card bills, then proceed to build my savings and begin investing.”

These days, Tina spends most of her time recording in her home studio and collaborating on new projects, including a number of score credits in soon-to-be-released major films. Her musical skill set may have expanded beyond heavy metal shredding, but Guo was still able to fulfill a lifelong dream of playing the main stage at a large metal festival in Germany last year.

“I think being flexible in your method is important, and at least for my career, not putting all your eggs in one basket,” Tina reflects. “If I had only stuck to playing metal, I wouldn’t be where I am today.” And if she hadn’t developed an unshakeable dedication to her craft — a commitment that got her awake at 5:30 every morning to get to the practice room ahead of other students — the world might have been deprived of Tina Guo’s unique musical stylings. 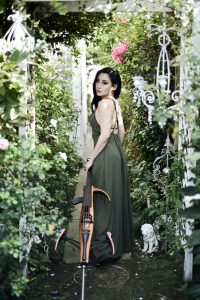