A big challenge for anyone doing live sound is something called gain staging. This refers to the way signal levels are set between the various components in an audio system. Poor gain staging results in high levels of noise and distortion, as well as a decrease in headroom. But when gain staging is set properly, you can get every last decibel out of your PA system, with minimal noise and maximum clarity.

The first step in achieving proper gain staging is plugging your gear into the correct jacks! This isn’t nearly as silly as it sounds. Mixers provide a variety of inputs to accommodate microphone and line-level signals. (Sometimes there are direct inputs for instruments, too.) Line-level signals (which typically come from smartphones, tablets, computers, CD players and outboard effects, etc.) are much stronger than microphone signals so mic inputs incorporate a preamp that raises that weak signal up to line level, enabling it to pass through a mixer to a power amp. (Instrument level falls between mic and line level.)

Mic inputs typically use XLR connectors, but line inputs are usually ¼-inch TS (or TRS) jacks. (“TS” is short for Tip-Sleeve, while “TRS” is short for “Tip-Ring-Sleeve.”) Since instrument cables use ¼-inch TS connectors, it’s tempting to plug a guitar or bass into a line input but this results in poor gain staging — a line input is generally not sensitive enough for an instrument, so you’ll end up cranking the mixer’s gain knob to the point where noise becomes an issue. Also, a line input does not have the correct impedance for guitar or bass pickups, so there’s likely to be a loss of sound quality.

Using an XLR-to-quarter-inch adapter to plug a microphone into a line input is another big no-no. You’ll have to crank the gain really high just to be able to hear the mic, adding noise. On the other hand, if you plug a keyboard into a mic input, you’re probably going to overload the input, resulting in distortion even when the gain is turned all the way down. 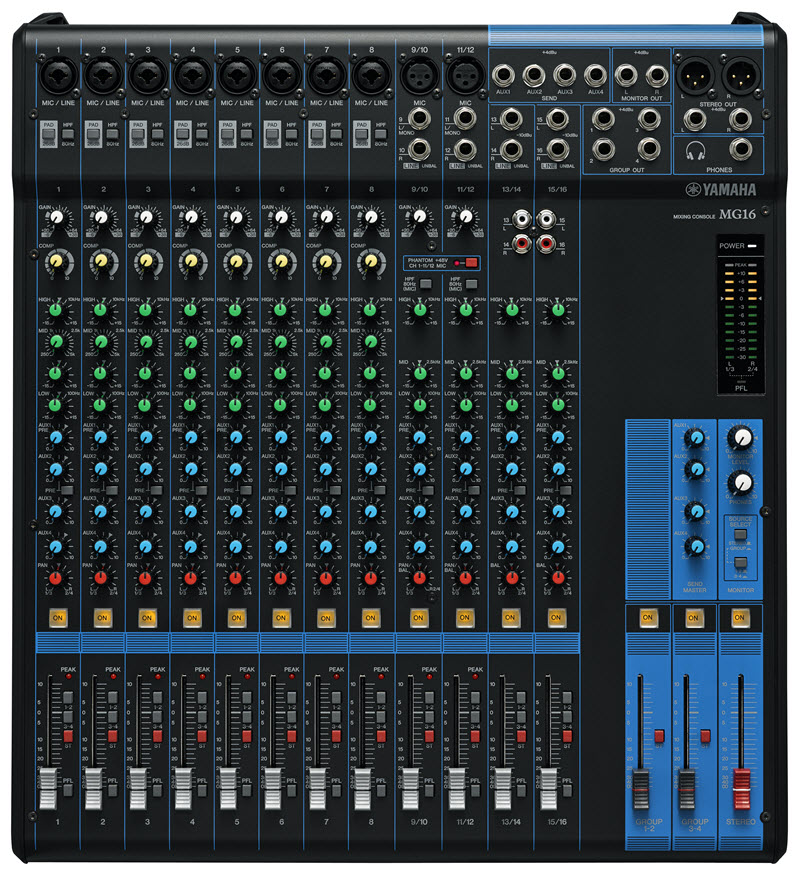 Once you have the source matched to the input, it’s time to set the input gain or trim control. This is like the main water valve in your home. You want to open the valve enough for sufficient flow (ensuring a good signal-to-noise ratio), yet not create too much pressure (distortion). If you mess this up, the signal is never delivered properly to the rest of the audio chain. If the gain is down too far, you can raise the fader as high as you want, but you’ll get nothing but noise. Conversely, if you have the gain way up and the fader way down, chances for distortion are much higher and you effectively lose the ability to use the fader’s position to mix.

Many compact mixing consoles don’t provide a dedicated meter for each channel simply because it’s too expensive. A typical alternative is a two-color LED with green for “signal present” and red for “overload.” In that case, adjust the gain control until the LED blinks red briefly, and then back it off by about 15 percent. Other mixers offer “ladder” meters, with several segments indicating signal strength. In those cases, a red LED will still indicate overload (it’s often labeled “Peak”), and there may also be one or more yellow LEDs to show when you’re approaching that point but not quite there. In those cases, adjust the gain until the loudest signals cause the yellow LEDs to light, making sure that the red Peak LED does not light at all. 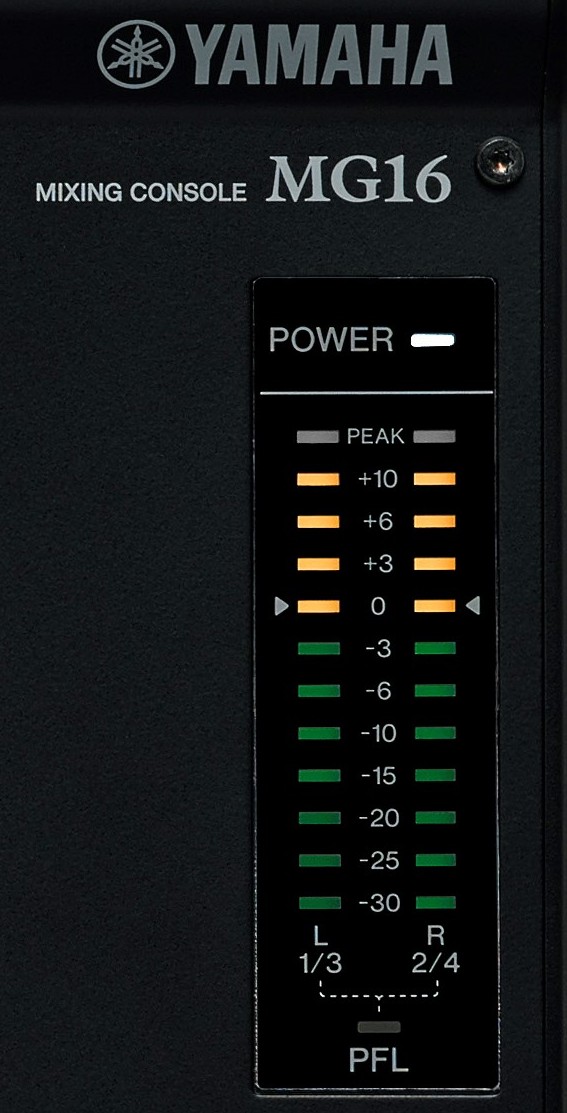 Many mixers provide a switch on each channel called PFL (short for “Pre Fader Listen” or “Pre Fader Level”). Pressing this button temporarily allows the main output meter to show the level of that one channel before its fader. In other words, it’s measuring the water pressure at the main valve, but before the kitchen faucet. A good way to set levels is to put each channel into PFL and adjust its gain knob while watching the meter. (A bonus on Yamaha mixers is that, when you push the PFL switch on a channel input, it automatically sends just that signal to the headphone output for audition.) You’ll want to leave a bit of headroom — the safety margin between average signal level and the ceiling or distortion — so get the signal to read roughly -6 most of the time. If you set the gain on a lead vocal mic to read 0 dB when a singer is at average volume, the signal may distort when they get loud.

What if you turn the gain control down all the way and the meter is still at “0”? Look for a Pad switch on the channel and use it. A pad lowers the sensitivity of the input so that a microphone does not overload it, reducing the possibility of distortion. Some microphones have built-in pads designed for use on a loud source like a kick drum or a guitar amp. If so, use the pad on the microphone first because the microphone’s internal circuit is the initial “gain stage.” If you’ve overloaded the microphone, you’ll get distortion even when the input level reads well below 0.

A variation on PFL is known as Solo, though this is more commonly found on mixers designed for recording, as opposed to those designed for live sound. When a channel is soloed, the meter usually shows post-fader (as opposed to pre-fader) level, so the fader must be set at unity gain while you adjust the gain or you won’t get an accurate reading. This is the spot — usually marked next to the fader with a “0” or a small arrow — where the fader is putting out exactly what it is receiving, neither boosting nor cutting the signal. If gains are set correctly, most if not all of the channel faders should be at or near unity gain while you are mixing. Conversely, if all of the faders are very low or very high, that’s a sure sign that something is wrong with your gain structure.

Keep in mind that other “valves” affect the audio signal, such as the main mix fader — which should normally also be set at or around 0. Also, adding EQ or compression to a signal will change the gain staging. In the case of a compressor or limiter, you may need to use the its output control (sometimes called “Makeup Gain”) to reduce or make up the difference.